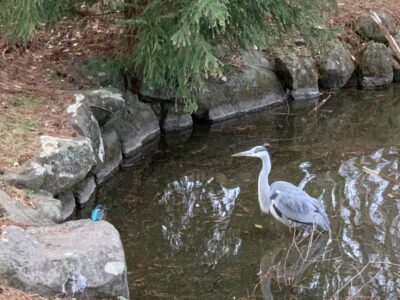 This photo was taken and sent to me by Junko Kaneko – along with this message: I take an early-morning walk everyday and usually do some bird-watching along the way. I especially enjoy the kingfishers! The other day, I went to Akatsuka park, and when I reached the pond, I noticed this gray heron stealthily preparing to snatch the kingfisher perched on the rock. Worried that the kingfisher would get eaten, I quickly moved in closer so I could give warning. Fortunately, it flew away in time. I was very relieved that it got away! Gray herons are graceful in appearance, but they are actually very ferocious birds. I have seen them eating frogs and even decorative carp on several occasions. So I’m very happy that everything turned out ok. I am hoping to see that kingfisher many times again in the future!

Did you, like me, often listen to Prokofiev’s “Peter and the Wolf ” when you were a child? Well, if you did, you`ll remember the tension we felt (and the few actual seconds on the record or cd seemed so torturously long when we were kids) as the cat (represented by the clarinet), comes sneaking up on the bird (represented by the flute), creeping over the grassy meadow “on its velvet paws”. We felt helpless in our living rooms or in our snuggly beds – and we desperately wanted to intervene in some way… but fortunately, Peter, represented by the strings, did it for us – by shouting “Watch out!” and sending the bird off into the trees, safe from the cat’s clutches.

Memories of listening to that classic, riveting scene, came flooding back to me as I read the story behind this amazing photo sent to me by Junko Kaneko (featuring two of Tsukuba`s most beautiful birds).  And it just goes to show that you don`t have to go on an African safari to have an unforgettable “nature experience” or observe various kinds of wildlife drama.

There is no more exciting bird to spot in the Tsukuba area than the strikingly blue, orange and white kingfisher (KAWASEMI, 川蝉 or 翡翠*) . I have felt a special affinity for them since the time I was convalescing for two weeks on a house-boat on Lake Nagin in Kashmir, India – and one kept me company by using the boat as a perch to scout for prey. I was also lucky enough to have them frequent the river (actually an irrigation canal) that ran in front of my house during the time I lived in Hojo, Tsukuba. Since leaving there after the devastating tornado, I have only spotted them a handful of times – and even then, only for fleeting moments (though each one of these sightings remain emblazoned one my memory cells in a brilliant emerald-blue).

You can’t help but sympathize with these tiny gem-like creatures (their traditional Japanese nickname has been KEIRYU NO HOSEKI – 渓流の宝石 – Mountain Stream Jewels) who need CLEAN, CLEAR WATER so they can hunt for food, and muddy banks to rivers and ponds to build their nests in. Even in pristine, natural conditions, these birds have a hard time making it through infancy (many die learning how to dive or before they learn how to!) and then winters (when they are killed off by cold and hunger). So given the fact that in Japan nearly all the riversides have been paved over with concrete, and most of the ponds are now murky, its no wonder that KAWASEMI have been designated threatened (in one form or another) in several prefectures (Tokyo, Chiba, Osaka, Tottori, Kochi, Toyama, Nara, Iwate, Saitama and Okinawa). Indeed, a kingfishers life is such a struggle and so fraught with danger (cats, rats, glass-windows, pollution, embankment construction, that according to the Royal Society for the Protection of Birds, the great majority do not live beyond a single breeding season. And that is why we have to root for them.

You can try and seek them out at Doho Park (where the restaurant meets the pond), Matsushiro Park, Oto Numa Park – or where Junko-san saved the day for her favorite bird – Akatsuka Park (just north of Meikei High School).

You might also want to familiarize yourself with their song (watch this) – so you can “spot” one by ear, even when concealed among reeds etc., at a distance, or perched somewhere you haven’t thought to look.

Catching sight of a kingfisher, even as just a fleeting blue streak darting off into the distance (they are very shy and SPEEDY birds) is something you`ll never forget.

Thanks for the picture Junko-san.