Works By Nobuaki Yamanaka Transform the Tsukuba Art Museum into a Solemn Inner-Sanctum of Blue (thru Dec. 6th) 3 December, 2020 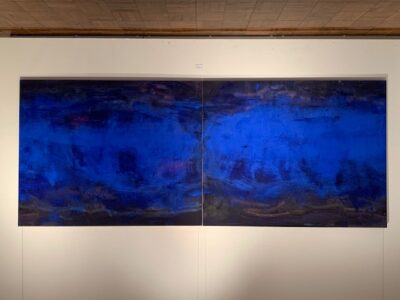 One of the striking works by Nobuaki Yamanaka (山中宣明) featured in his REVERBERATION exhibition, at the Tsukuba Art Museum thru December 6th 2020

Stepping through the archway and into the first main section of an exhibition called REVERBERATION (after having registered my telephone number and had my temperature checked by the receptionist) I looked around and soon found myself transported far back in time – and just as far in space, to my early childhood in New York, when I would lay in bed at night, snuggled up in the dark with my eyes closed, and enjoy the floating colors I saw glowing on the inside of my eye-lids – deep blues and yellows in ever shifting fractals… until I drifted off into sleep.

I hadn`t seen those particular colors and shapes in decades (though I often remember having experienced them), but thanks to artist Nobuaki Yamanaka, there they were again, lining the walls of the Tsukuba Art Museum in his magnificent creations. And all alone (for a few moments), I wandered through his tastefully laid out exhibition, warmed and comforted by memories, a sense of nostalgia, and the impact of colors which I realized were (for some reason) so deeply important to me in a fundamental way – deep, warm blues, vibrant yellows… 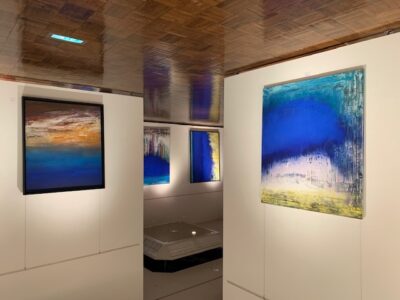 Reverberation – an exhibition by Nobuaki Yamanaka. More than enjoying each individual painting, I felt the entire museum space had been turned into single, powerful work. The show’s title apparently suggests some connection to, or evocation of sound or music aroused by these paintings (something confirmed by the artist himself who claims he is inspired by music). In my own personal experience though, I found these works so VISUALLY powerful and stimulating  that while walking among them all thought of music or sound was forgotten.

And while the individual works were beautiful (like Rorschach tests in which each person might perceive whatever he or she perceives) and some of them very powerful and and alive with energy, I realized that more than enjoying the effect of each separate painting, it  was the impact of the rooms themselves – on a whole – that was most profoundly felt. Yamanaka had turned the series galleries, in their entireties, into a warm and comforting sanctuary, a temple of the color… most especially BLUE… in its many shades.

If like me, you feel a connection to that color, try to catch this show – repeatedly if you can (the more you look the more beautiful it gets!). I have been to many, MANY, exhibitions…  in Tsukuba… Tokyo… Japan… and the great cities of the world… but I found this exhibition to be one of the most exciting I`ve seen in a long time. 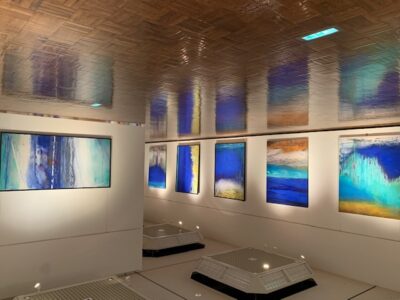 Another view of the exhibition… Ahh, would I like to have a room like this in my house…. 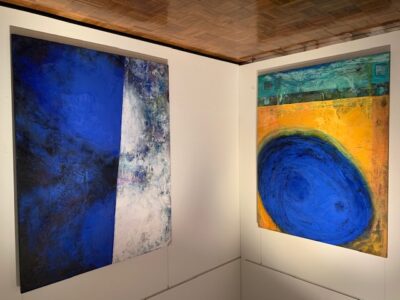 Some more works, the one on the left, in particular, gives off a tangible energy when viewed in person. 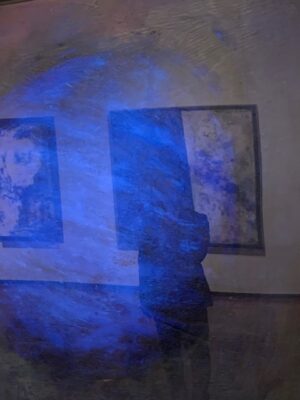 The artist gazing at his own work (in a photo I took). Interestingly, some of my favorite pieces in the show were covered with a sheet of glass (or plastic?) I found the reflections these caused a nuisance, but Yamanaka told me that the reflections were an effect he was looking for. 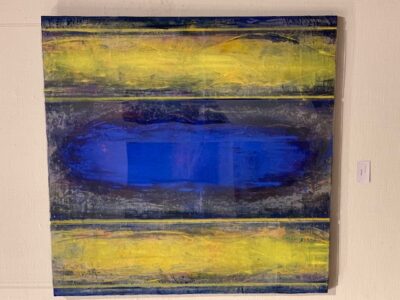 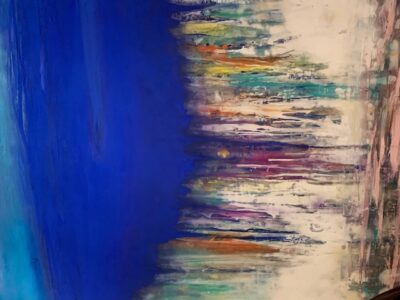 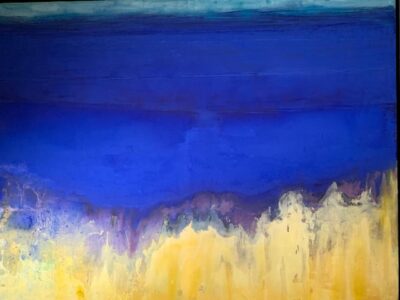 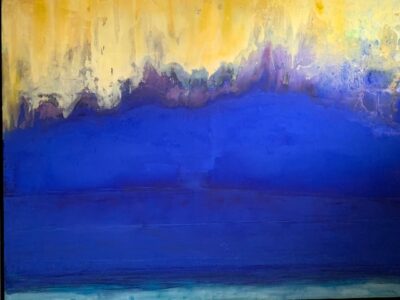 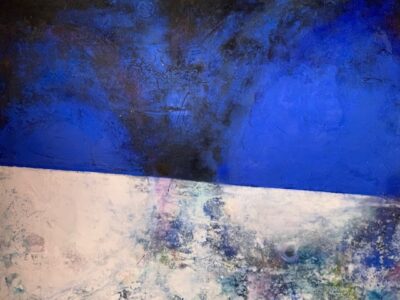 This was the only work to which Yamanaka ascribed a specific meaning to. During his talk he explained that the fissure dividing both halves of this painting represents the disaster that struck Japan in 2010. In other words, it is a sort of “Before and After” portrait of the Tohoku Region struck by the earthquake and nuclear accident 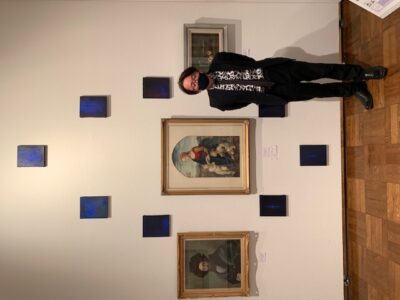 The artist posing in front of a single work made up of several individual pieces – copies of classical masterpieces he had made as a student, and some of his recent “blue” work, connecting the different ways he has found to express himself over the years. 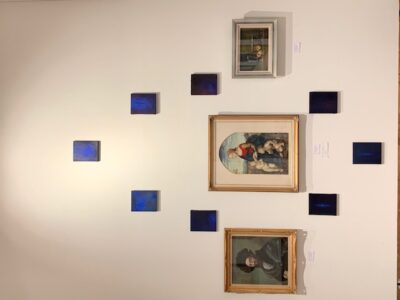 The same work without the artist 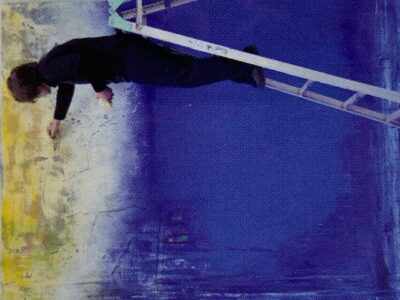 Yamanaka at work – something that he emphasizes about his oeuvre is that utilizes mixed-media, which in this case means materials from both Western and Japanese style painting. 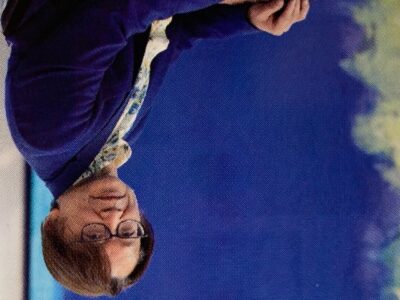 Portrait of the artist – who was born and raised in Ami Town and now lives and works in Tsukuba. Checking the long list of his exhibitions to date, I found that his first showings were held at AKU AKU which until its closing was the “artsiest” and coolest hang-out for Tsukuba University students. Seeing it listed reminded me of how much I miss the place!

On December 5th, the artist will give a talk (in Japanese) at 2 PM

See some of my other writing on art: