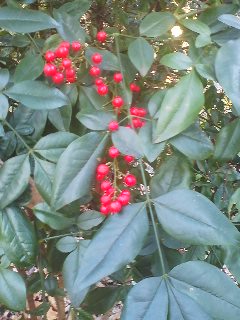 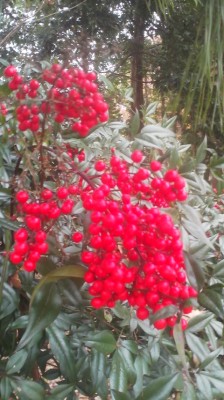 A bush heavy-laden with NANTEN (Tsukuba) 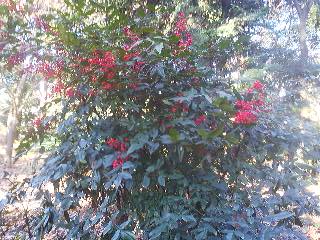 Green and red are the traditional colors of Christmas. And since the use of color is an important element of cultural identity, some might find it surprising that these colors which hold so much significance for Christians ( red symbolizing the blood of Jesus Christ, while green symbolizes eternal life) should have been so readily adapted by the Japanese each year during the few weeks leading up to Christmas.

Well, it is not strange at all. In fact, red and green have been beloved colors of winter in Japan since long before the arrival of American Christmas decorations. 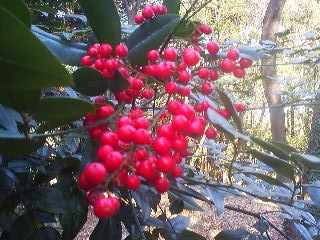 NANTEN berries in Tsukuba (in December)

The reason for this is the surprising abundance of trees and bushes which bear red berries in Japan in winter. These plants have long added bright color to archipelago`s coldest and gloomiest season, with green leaves and shiny red berries glistening among the browns and straw colors, or even more impressively from under a cover of snow. Today, on a stroll through some of Tsukuba`s old neighborhoods, I was overwhelmed ( and confused) by the many different varieties of red-berry bearing plants in the gardens of homes, as well as in the wild areas behind and between them

In fact, I was so disconcerted by my inability to differentiate between these different shrubs and trees that I cut my walk short and headed to the botanical garden to clear things up. Thanks to the help of the volunteer staff there ( and their field guides), I now feel confident in identifying the three most common of them ( details below). 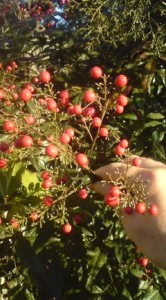 Among the many plants which bear red berries in Japan in winter, there is ONE which stands out from the others in terms of importance and cultural significance- NANTEN (南天), or as it is known in English, NANDINA. This plant has for centuries been planted in gardens and put inside of homes because of the belief in its powers to drive away misfortune and evil.

This belief ( which goes back to China) derives not only from the fact that its berries and leaves DO have medicinal powers ( NANTEN are still used as an ingredient for a popular brand of throat lozenges), but also because the name NANTEN, can alternatively be written with the Kanji characters 難転,which would mean To Transfer Difficulties Away (難を転じる, nan o tenjiru). Because of this auspicious sounding name- NANTEN, the Japanese have long used this plant in a variety of ways with the intention of keeping misfortune, sickness, bad dreams and evil, away. 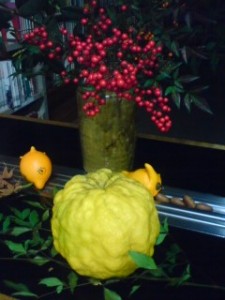 Nanten used as a part of a seasonal decoration in Tsukuba

This is still a very common practice, and this winter I have been able to find NANTEN growing on the KIMON side of many homes, even in the Tsukuba`s newer housing communities ( researching this post I found that many home construction companies actually recommend planting NANTEN on their websites).

There are, however, throughout Japan many variations in terms of how to use NANTEN in this way. Checking a dictionary of folk beliefs, I found the entry on NANTEN to be exceptionally long. For example, some use Japanese Holly ( hiiragi for the North-East corner and nanten for the South-West, protecting the axis along which bad energies are believed to run). Others on the left of the house and others on the right, etc.

But generally speaking no matter where you are in Japan it has been believed that growing NANTEN on ones property will bring the household happiness and prosperity( though these days many find the quickly spreading plant to be annoying and cut them down!). 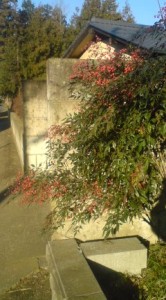 Nandian at the unlucky north-eastern corner (kimon, 鬼門) of the Ichinoya Yasaka Shrine in Tsukuba

The leaves of NANTEN have also long been thought to have the power to eliminate poisons. Even today sprigs of NANTEN with leaves are put on top of SEKIHAN ( sticky rice which becomes slightly purple-reddish after steaming with beans), which is served on special celebratory occasions.

One reason way NANTEN were placed near the toilet was apparently to have easy access to the leaves when one had STOMACH TROUBLE. 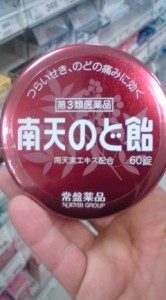 The leaves of NANTEN have also been used to cure and prevent colds, and to treat sore throats and coughs. The berries as well, have been used to treat a variety of ailments,

The belief in NANTENs powers extends to cases of samurai warriors having adorned themselves with berry-bearing sprigs before battle, the custom of expecting mothers sleeping with them to ensure easy delivery, and more prosaically, to presenting chopsticks made of their wood to children to prevent them from catching cold. 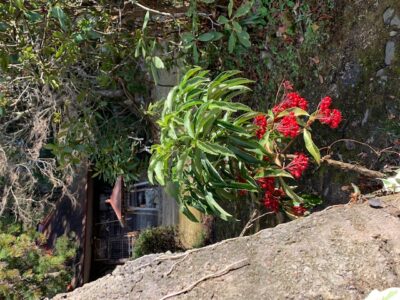 So now you will probably be on the lookout for NANTEN. The trouble is, however, as I have mentioned above, that there are several other common types of similar looking red-berry bearing shrubs and trees in Japan.

Two of the other types that you will most likely encounter if you take a walk in winter are SENRYO and MANRYO. They are also considered to be LUCKY PLANTS ( connected with making money) both look quite similar to NANTEN to the untrained eye ( like mine). A few pointers , however, will help you to easily identify each one.

First, as already mentioned, NANTEN can often be found at the North-East corner of a property. That position would suggest that a red-berry bearing bush is NANTEN.

The next step is to check the leaves, which on NANTEN are slightly diamond ( or coffin) shaped.

Another important point is that the berries on the NANTEN grow on a branch all their own- not connected to the leaves. 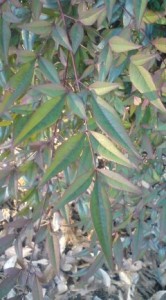 The leaves of the NANTEN are slightly diamond shaped

As for MANRYO and SENRYO, which are also extremely common in Tsukuba, you can tell the difference between them easily. Manryo berries droop below its leaves, while SENRYO berries stick up above the leaves. 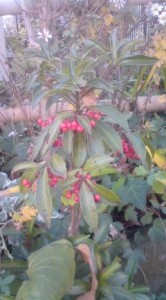 The berries on the shrubs that I have mentioned in this article are not eaten by humans as fruit. Birds , however, love them. ( The berries CAN be used to make a liqueur).

And even if you have no interest in the supposed powers of the NANTEN, you can still enjoy its beautiful Christmassy colors. I mean in countries where there are cold winters, what could be more heart-warming to the eye than deep greens and reds.

Another interesting winter scene closely associated with NANTEN are SNOW RABBITS which Japanese children make when it snows. NANTEN leaves are traditionally used for the ears, while the red berries are used for the eyes.

( and DO try the NANTEN cough drops- they work!) 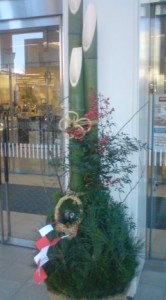