Check Out the Blossoms on Japan`s Tea Trees (Camellia sinensis)- the Cha no Hana, which are in bloom now- though not popular among flower lovers in Japan- they just might be YOUR cup of tea! 8 December, 2020 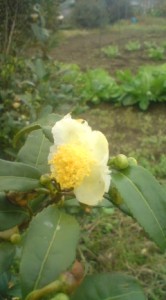 The flower of the tea tree in Tsukuba

Since its seeds were first brought over  from China by the great priests Saicho and Kukai ( in the years 805 and 806, respectively), Camellia sinensis, the tea plant, has gone on to flourish  throughout the Japanese archipelago- not because of its fruit, or its wood, but thanks to its leaves, from which is produced the beverage which has been such an important part of Japanese life, its culture and its economy ( Japan is the number ten producer of tea and the number 15 consumer in the world).

Though the northern limits of tea plant leaves as an agriculturally profitable crop are Murakami City in Niigata Prefecture and Daigo City in our very own Ibaraki Prefecture, the tree can be found growing as far north as the town of Furubira (古平町), in southern Hokkaido. And in most of Japan, even in areas where there are no major tea plantations, tea tree can be found growing wild.

Though you might not notice a tea tree in the wild through most of the year- it looks like any other bush- they are very easy to spot in autumn and early winter. This is because of the numerous little flowers, like tiny camellias ( to which they are related), which burst into bloom on them from October through December.

These blossoms are distinctive in that they are filled with a thick cluster of yellow stamen. 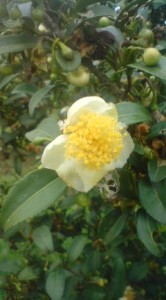 Since I always enjoy these flowers on autumn and early winter strolls ( yesterday on a walking tour I was guiding we saw some impressive bushes), it has always puzzled me that they are not very well known at all among the Japanese ( or  the Chinese, for that matter!).

This lack of recognition might be explained with a combination of  reasons. First, it seems that lots of flowers on the trees mean lower quality tea ( vital nutrition is diverted from the leaves). Second, the flowers attract a lot of insects ( as do the leaves- which is why organic, or insecticide-free tea is so rare). And third is the fact that the tea flowers are overshadowed in beauty by their relatives , the camellia (tsubaki) and sazanqua flowers, which are much larger and better better balanced.

So keep your eye out for the tea tree. Like me, I`m sure  it will excite you to find it growing in the wild- something you probably never expected.

You might come to appreciate these blossoms in the same way as the famous man ( the founder of the Tea Ceremony) who is mentioned in this Haiku by the poet Yamaguchi Sodoh (山口素堂ー1642-1716),which goes like this:

Flowers of the tea tree

In the eyes of Rikyu