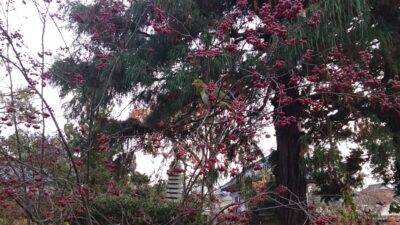 Can you spot the white-bellied green pigeon in my red chokeberry tree?

The picture above was taken in my garden, located near the foot of Mt. Tsukuba.  In the tree fruiting with lots of small, red berries, there is a bird. Can you see it?  It is a species called the white-bellied green pigeon (Treron sieboldii) –  AOBATO (青鳩) in Japanese. I was astonished to find such a beautiful creature, one I had never seen before, resting right there in front of my house! 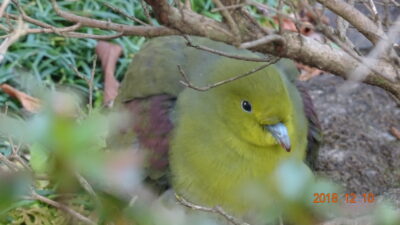 A close-up taken later, when I found the same bird on the ground and dazed – most probably after crashing into one of my windows .

According to a Japanese book entitled This Morning`s Birds (けさの鳥), published by Asahi Shimbun :

” The aobato is a yellow-green pigeon with a body length of about 33cm. It lives mainly in hardwood forests and likes to eat ripe persimmons and acorns.

Its call, which sounds something like “awoh—awoh—？”,  can be heard far-off in the distance.

It breeds in Hokkaido and Honshu in the summer and moves to more southern regions in the winter. ”

Most interesting, though, is that these birds have the habit of flying off in large flocks to drink seawater!  Just why they do this is not known for sure, but one theory is that it helps them to replenish important minerals or other nutrients.

The tree the bird is resting in (in the picture) is a red chokeberry (Aronia arbutifolia)  – which is called a Seiyo Kamatsuka in Japanese.  Its berries are edible, though they might be a bit too astringent for most tastes .  I don’t know if  aobato like these fruit – but I certainly hope they do. Perhaps that is what attracted this one to my garden. 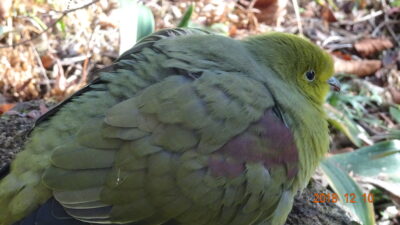 Much to my surprise, I later found the same bird on the ground, unable to move. He might have crashed into a glass window-pane when trying to fly out of my garden – a theory which seemed more likely after I found green feathers beneath one of our windows.  I felt really sorry for him. Not only was he injured – but he was probably also separated from the rest of his flock. I took him out to the backyard and released him wishing him good luck. I hope he comes back to visit my garden again! 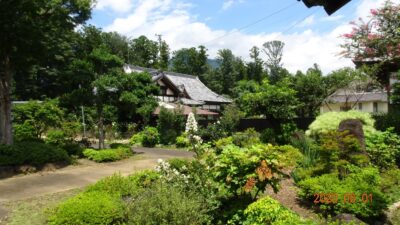 My garden, near the western slope of Mt. Tsukuba

I presently live  in a quiet old village near the foot of Mt. Tsukuba in the northwestern part of Tsukuba City.

I got this place over 10 years ago and hope to spend my retirement years working here in the garden.

I would like to keep myself surrounded by all sorts of living things.

This picture is of my backyard. The forest behind the garden consists of large zelkovas and cedar trees .  The Sakura River runs behind them. 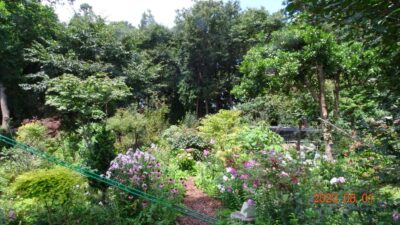 My backyard in August

I guess the abundance of nature we have here is what led to my having this special “wildlife encounter”.

The green pigeon must have thought this village – and my garden in particular, was a good place to rest its feathers.

The presence of abundant water must be an important factor in attracting them.

Anyway, I am still waiting for the green-pigeon… since it disappeared that day I have never seen it again.