A Road Runs Through it- right through the ruins of Tsukuba`s old Hanamuro-Jo (花室城) Fortress, that is! 5 December, 2020 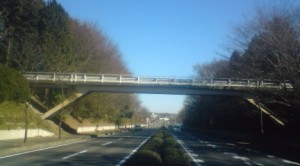 Each and every day of the year, thousands of people  pass through the ruins of the old Hanamuro-Jo Fortress (花室城) in Tsukuba .Since this has been going on without a single day`s (or hour`s) break for more than 35 years, we are talking about much greater total numbers over the years than those of the visitors to any one of Japan`s greatest castles – which are in fact some of the most distinctive in the world- including Matsumoto Castle, Hikone Castle, even the spectacular Himeji Castle.

This is true, despite the fact that the Hanamuro-Jo has no elegant turret (tenshukaku), or impressive stone foundations. Nor does it have any cleverly designed defensive features, such as those found in its more famous counterparts – in fact we don’t know very much about what it was like at all.

The multitudes that I am talking about, though, those who do pass through the ruins, remain within its precincts for less than 5 seconds, and do not even get out of their cars! In fact, they almost surely do not even know that a fortress does or ever did stand on that spot! There are no signs or markings of any kind to indicate that.

The only reason that they do zip through this  Civil War Period (Sengoku Jidai) Fort, is that a major road they are using- the Tsuchiura Gakuen Line ( 土浦学園線), was built to run right through it. If you live in Tsukuba or its vicinity, you have probably passed through it yourself- many a time!

You could have recognized the spot by the white pedestrian bridge which runs across that road about 300 meters east ( that means towards Tsuchiura if you are driving  from Tsukuba Center) of the Hanamuro Intersection ( 花室交差点)- which is the first light after the Route Hotel.

(You might well  ask- if nobody else knows about it, Avi, then how do YOU? Well, I learned of the location of the old fort (which I knew of from obscure books of local history ) from an even more obscure map of Tsukuba- an archaeological map- which was given to me by the curator of a local history museum. 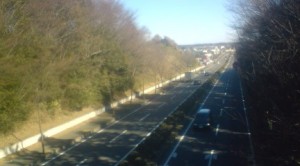 The Tsuchiura-Gakuen Road cutting the castle ruins in two

And how did this sad state of affairs come to be? Well, when the Japanese government was looking for a place to build a new science city, they found, about 50 kilometers North-East of Tokyo, an area which besides a few scattered hamlets was mostly  forest and marshland- the area that is now Tsukuba! A perfect place to start construction! And instead of the impossibly narrow and winding roads which are found running though much of Japan, it was decided to begin work on the new planned city by laying down some modern new thoroughfares- wide and STRAIGHT!

And though I believe that the Japanese authorities are usually interested in  at least documenting archaeological finding after detailed surveys before construction ( sometimes plans are actually halted as a result of these excavations), it seems that a blind eye was turned when it came to construction in Tsukuba. Straight lines were marked out by the surveyors, and historical sites or no historical sites,  hills were cut through, trees cut down and asphalt  laid. 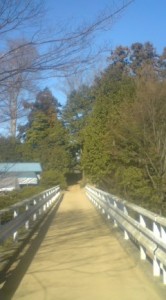 A closer view of the bridge

The Hanamuro Jo was one of a string of three fortifications built along the same ridge on between the Sakura and Hanamuro Rivers, probably by vassals of the Oda Family, which had a more impressive castle in the part of Tsukuba called Oda ( there are in fact about 30 ruined fortifications within the limits of today`s Tsukuba City.

The last mention of the Hanamuro Fort was in the late 16th century, and since it was dismantled, a part of the hill on which it once stood came to be covered with traditional homes ( most of them beautifully rustic and some very impressive. I have heard that the great Lord of the Mito Clan- Mitsukuni- Mito Komon, used to stay at one of these homes when he came on pilgrimages to Mt Tsukuba) and a Buddhist Temple ( Kakuo Ji). There is also a Yasaka Shrine, which is unusual in that it seems to stand within the grounds of a private home.(All in all it is one of the more peace and atmospheric residential neighborhoods in Tsukuba to walk through).

The part of the hill on which the main fortification sat, however, was always respectfully called The Castle by the local residents- and left undeveloped- until the bulldozers came to put in the Tsukuba Gakuen line. 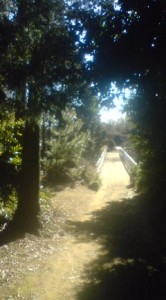 A view from the other side

Even with the road running through it, the old fortress site can still has a special aura about it. And the views afforded from the spot where the main fortress once stood are pleasing and reveal why this hill was chosen as a place to build a fort.

It is a perfect place to contemplate the passing nature of all things- even things that were built to last, like fortresses. 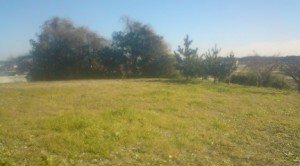 On top of the ruins of the Hanamuro-Jo 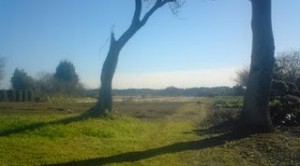 The view from atop the site of the fortress ruin (on the north side of the road.

Unfortunately, it looks like more of Tsukuba`s historical heritage is going to wind up under asphalt. More roads have been planned and the city seems to be trying to keep the public in the dark regarding the large number of sites of archaeological value in Tsukuba which have not yet been fully surveyed . I guess there is a belief that in a SCIENCE CITY, there is no room for nature ( I don’t mean parks) or historical attractions. That was the opinion of former Mayor Ichihara – and things do not look much different under Mayor Igarashi.I would like to show my map – that might make them feel guilty! 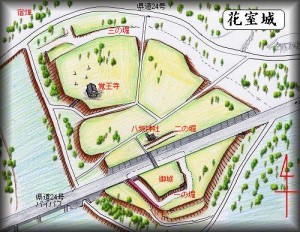 A rendering of the area which the Hanamuro fortress took up- note the road which now runs through it! 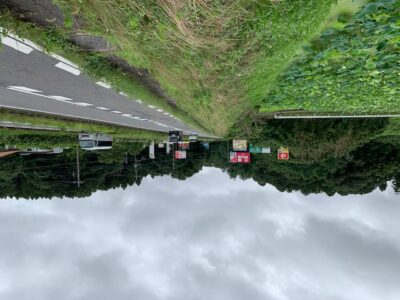 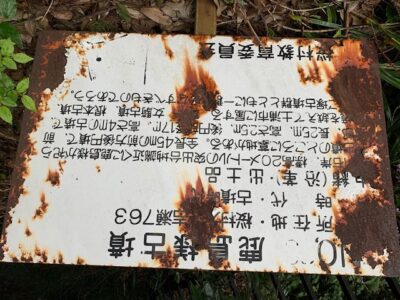 I found this old “Cultural Asset” sign in the woods. It reads : Kashima-sama Kofun. 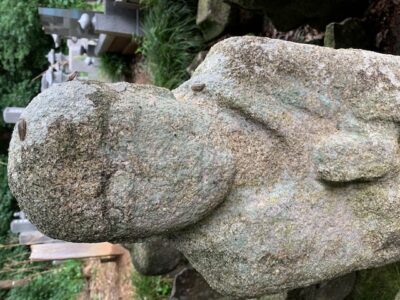 A statue of Jizo in a cemetery on top of the Kashima-sama. 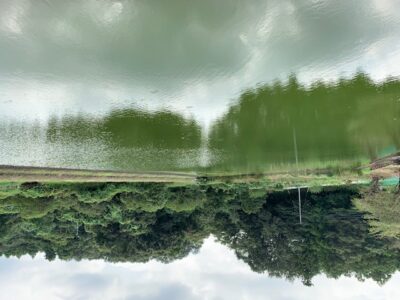 Further down the road, to the east, you can find this artificial fishing pond, the Kamigo Ike Pond, which was created after the road was put in. I recently discovered the the hills around this pond are also tumuli AND the site of a Shinto shrine. 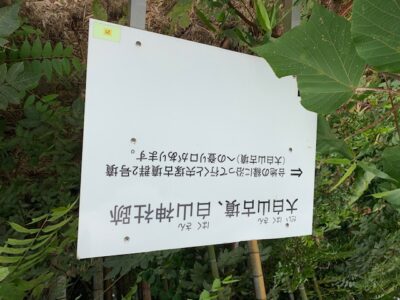 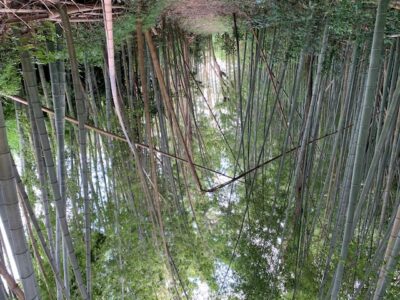 The path goes through this bamboo grove 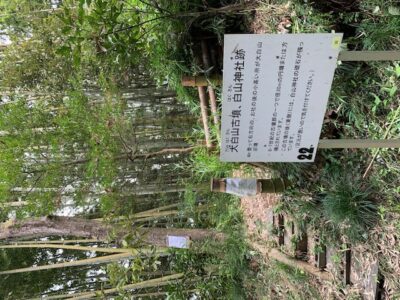