Their Long Hard Run Is Over – Ibaraki`s Salmon ( and salmon in Japanese culture) 17 November, 2020 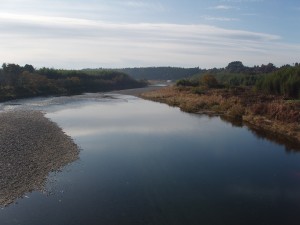 The Kuji River as seen from a bridge in Hitachi Omiya, Ibaraki Prefecture

It was early one November morning. Michael Frei, Thomas Mayers, and I were still laying, eyes open, within the warm and snug confines of the futon mattresses which had been kindly laid out for us the night before by our host Takayama-san. The light shining through the windows of the old farm-house suggested a beautiful day, but still we hesitated to get out from under the covers, as our exposed faces gave us a hint of the frigid air which would hit us as soon as we did so. There was no heater in this house, except for the electric KOTATSU (a heated table which in accordance with traditional East Asian health principles roasts your feet and loins (lower body) while your upper body remains cold!), so it took a little while to build up the will-power to arise. The black and white photos of Takayama-san’s deceased grandparents staring down at me from the Buddhist altar (which I realized I had been rudely pointing my feet at) got me feeling a bit uncomfortable, so with a big YOISHO, I threw off my kakebuton (cover) and sprang to my feet. I knew from the experience of my own house that it would be warmer outside, so I scrambled to the back door, opened it and set out to explore the unfamiliar surroundings of DEEP IBARAKI – as we had spent the night in Hitachi Omiya, a ninety minute drive north from Tsukuba. 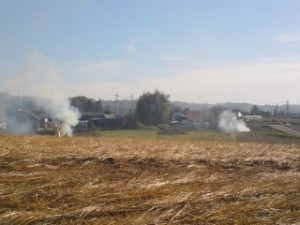 The autumn air in the Japanese countryside is usually quite smokey- since the farmers are in the habit of burning their agricultural waste- and often their garbage, as well (though this is illegal). Better move to the city for some fresh air!

I should not have been surprised to find that the country air which I had wanted to take in and savor, had already been tainted by the numerous early morning bon-fires that the neighboring farmers had going, irritating my nostrils with the acrid sensation of burning vegetation and plastic. I quickly forgot this annoyance as I noticed an assortment of large birds soaring overhead – egrets, kites (tombi) and other raptors which I could not identify without binoculars. 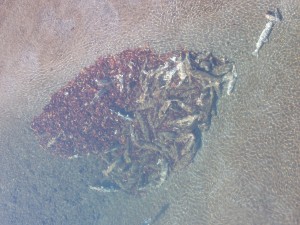 Salmon dead or dying, as seen from the bridge

While captivated by these graceful creatures, I was joined by my friends, toothbrushes in hand, and we spontaneously set out beyond the confines of our garden and out onto the road. Turning the corner and looking left we noticed that there was a bridge about one hundred meters away. We headed for it. A sign told us that it was the Kuji-River (Kujigawa, 久慈川), which runs 124 km from Mt. Yamizo (Ibaraki Prefecture’s highest mountain) to the Pacific Ocean at a point on the border between Hitachi City and Tokai-Mura. Reaching the bridge, we were treated to the rare sight in Japan of a river without concrete embankments. Our amazement was cooled when we quickly spotted some of the obligatory tetrapods which are somehow supposed to prevent flooding (but surely help line the pockets of some government officials and concrete executives). This was soon forgotten when we looked down at the crystal clear river and noticed fish, lots of them. Many appeared to be dead, or weak and dying. In a few seconds we realized that these were salmon, on their last legs, completely spent after fighting their way up the river to lay their eggs. Here they would all die and become the food for the many scavengers (the kites) which soared patiently overhead.

A salted salmon ( ca 1877 ) – one of Japan`s most famous western style oil paintings- by Takahashi Yuichi- the perfect medium for depicting an oily fish. That`s must be why it looks so tasty!

Most Japanese associate sake (salmon) with Hokkaido, Japan’s northern island, and to tell the truth I was surprised to see them in Ibaraki. Later I learned that the Tone River which forms part of the border between Ibaraki and Chiba prefectures is the southernmost limit on the Pacific Ocean side of Japan for salmon breeding. In fact, three of Ibaraki’s rivers host returning salmon every year: the Nakagawa, the Kujigawa, and nearest to Tsukuba, the Kokaigawa. If you have time this weekend, you might want to look down from one of the bridges over one of these rivers and have a look: it is one of the most amazing phenomena in all of nature! These fish return to the upper reaches of the rivers in which they were born, after spending 3, 4, or 5 years at sea. They have to overcome countless natural and man-made obstacles. Honestly speaking I am amazed that there are ANY salmon in Ibaraki’s dam infested and polluted rivers.

Salmon and mice by Katsushika Hokusai

The salmon is a VERY important fish in Eastern Japan (as I said the southern limit of its range is the Tone), a fact which goes back to pre-Yamato days when this part of Japan was inhabited by the Ainu. It was with them that the custom of using every part of this fish began. The Ainu even made clothes from the skin (you can see an example of this at the National Museum in Ueno). Salmon is mentioned in the Hitachi no Fudoki, the ancient chronicle of this area. 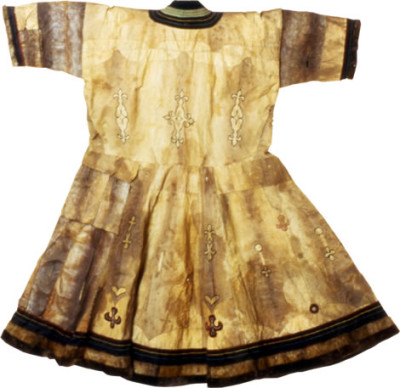 An Ainu garment made of salmon skin 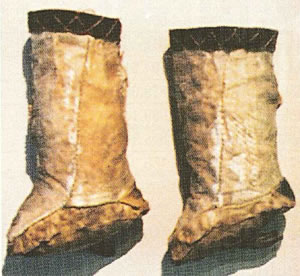 Ainu footwear made of salmon-skin

You will be seeing lots of whole salted salmons on sale at the end of the year, as they are traditional winter foods, and it is a custom for a son-in-law to present his in-laws with one on the first New Year’s after marriage. Of course the roe, called ikura in Japanese, is a well-loved delicacy. Along the Kokai river you might be able to pick up some cheap ikura which has just been harvested. Local fisherman (only those with special permits can fish for salmon in rivers) told me that the meat from the fish taken upriver is NOT delicious and is only fit for NABE (stew). They said the best tasting salmon (called shakeh when talked of as a food) are taken at sea, just outside the mouths of rivers. You might have noticed that grilled shakeh is a regular breakfast dish in the Kanto Area. Many Japanese friends have said to me that it is the only fish that they can eat every day without tiring of it . 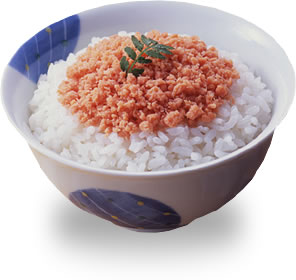 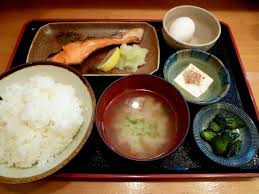 A piece of grilled salted salmon is part of a typical breakfast in eastern Japan- along with rice, miso soup, a raw egg ( to crack over the rice), pickles, and tofu !

As a great salmon lover, one of my great memories in Japan is a trip I made to Murakami, on the Japan Sea coast in Niigata Prefecture, a rustic old town famous for salmon (which in their local dialect they call IYOBOYA). Not only can you see lots of photogenic salmon hanging to dry under the eaves of homes here and there – and buy all sorts of salmon products at various specialty shops, but there is also a salmon museum/aquarium, which is quite amazing. It is called the IYOBOYA KAIKAN (イヨボヤ会館), and besides telling you just about everything you ever wanted to know about salmon and the history of salmon culture in the area, it gives you the chance to observe wild salmon in the Miomote River. And not from above – but from the side! Glass panels have been installed creating an under-river observatory! 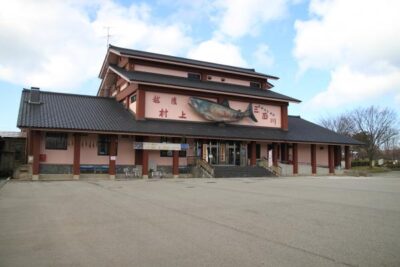 The IYOBOYA KAIKAN Salmon Museum/ Aquarium. Not only can you learn everything you ever wanted to know about the life cycle of salmon here, but you can actually observe them in the wild (along with all sorts of other creatures) as glass panes inserted along the Miomote River (三面川), create a unique under-river observatory!