The Inner-Chamber of the Torazuka Kofun Tumulus (虎塚古墳) - WILL NOT BE open to the public as usual in November (in 2020) 5 November, 2020 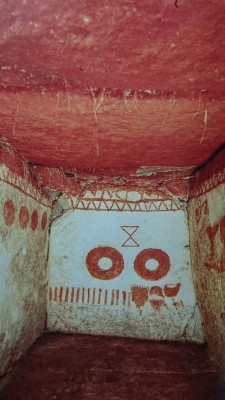 The inner chamber of the 7th century Torazuka Kofun tumulus (located in Hitachi Naka) is only open to the public for only a few days every year – in spring and autumn. This autumn (2020) the paintings on the tombs wall will not be open for viewing as they usually are in November.

Approximately 6,000 ancient tumuli (KOFUN) have been identified in Ibaraki Prefecture (with about 200  found within the Tsukuba City limits). They were built over a period of just over 400 years – with the first square HO-KEI SHU-KO-BO (方形周溝基) type tombs appearing in the 4th century, and the last of the ZENPO-KO-EN (前方後円墳) type burial mounds (often called key-hole shaped tumuli in English because they look like key-holes when observed from the sky)  completed by the mid-7th century. They were built to inter local rulers, strongmen, and great warriors, men (and sometimes women) who had originally come (or who`s ancestors had come) from western Japan (the Island of Kyushu and the area around Nara and Kyoto) to at first take, and then maintain control of what was then known as the Land of Hitachi (now Ibaraki Prefecture) for the Emperor and the Yamato Empire.

They were buried together with weapons, equestrian paraphernalia, and embryo-shaped beads called MAGATAMA. The tombs were often surrounded on the outside with terra-cotta figurines (HANIWA) depicting a wide range of motifs, including houses, warriors, horses, sumo wrestlers, animals, probably meant to keep the deceased company in the after-life. And the tombs kept getting bigger and bigger – so if the introduction of Buddhism to the area hadn`t changed funerary practices, the whole country might have ended up covered in tumuli ! 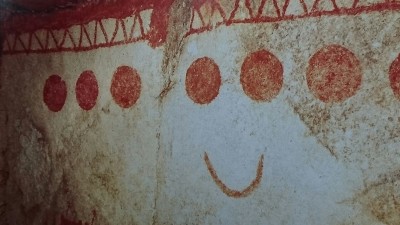 A closer look at one of the walls inside the Torazuka Kofun burial mound (is that a smiley face I see?). After having remained sealed for 1,300 years, the tomb was opened in 1973 by Professor Hatsushige Otsuka and his team from  Meiji University (an excavation that was state-of -the art in Japan at the time, with atmospheric conditions inside the chamber being measures before the chamber was actually opened).

The 7th century Torazuka* Kofun tumulus (虎塚古墳) in Hitachi Naka (north of Mito) is perhaps the most famous of Ibaraki`s ancient tumuli. It is not especially large, nor were the weapons and other funerary goods found inside of special interest – and none of the usual HANIWA figurines were found there at all! What makes it extraordinary are the paintings found on the walls of its inner chamber, where 1,300 year ago, a single adult male warrior was laid to rest. The curious geometric patterns were rendered on the wall using red ocher (red iron oxide) – BENGARA in Japanese (deriving from the Dutch word Bengala, as in Bengal, India) and they are very difficult to keep well-preserved. For that reason, the general public is let into the burial chamber for only about 16 days a year,  8 days in spring and 8 days in autumn (though the actual dates change from year to year). 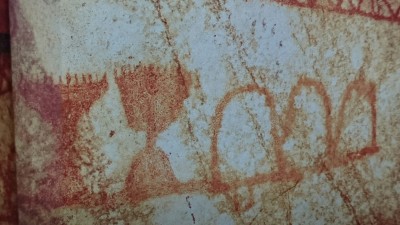 A closer look at the mysterious rust red wall paintings . Any ideas what these patterns could mean? 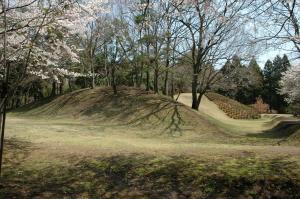 The Torazuka Kofun as seen from the outside. This site was designated a National Historical Monument (KUNI NO SHISEKI – 国の史跡) 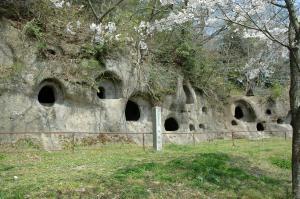 Near the Torazuka Kofun (with its intriguing murals) are these unusual (for Japan) burial caves (about 300 of them!) called the Ju-goro-ana (十五郎穴)*.

And if you`d just like to focus on one localized area, after you`ve finished contemplating the meaning of  those mysterious rust-clored patterns painted on the burial chamber walls, there are some more ancient tombs nearby, more than 300 of them, at a site called the Ju-goro-ana. 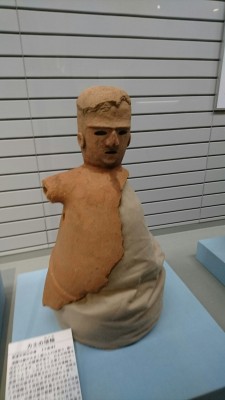 Haniwa figurine depicting a sumo wrestler (unearthed at a burial mound in Tsuchiura City. Now on display at the Archaeology Museum in Tsuchiura. I got the information about the Torazuka`s Kofun`s open-to-the public dates from a poster I found on the wall here! 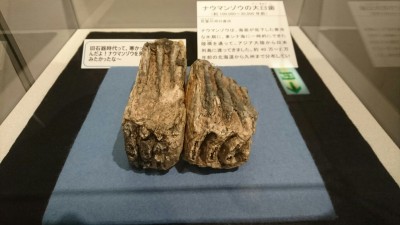 Fossilized Nauman elephant teeth discovered along the banks of the Hanamuro River in 1974. Part of a small but very interesting exhibition called “Tsuchiura`s 30,000 Years” 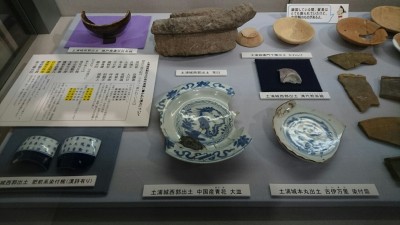 These Chinese made objects must have been difficult to get a hold of during the perios of National Isolation (1633-1853), when they were acquired. (unearthed at the site of the old Tsuchiura Castle) 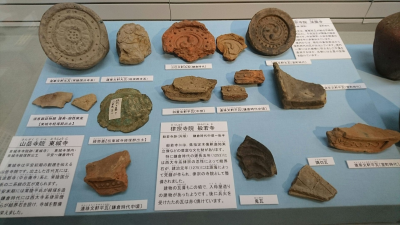 Getting to the Torazuka Kofun

By car : Ten minutes from the Hitachinaka I.C. on the Kita Kanto Expressway.

By Train: Take the Joban Line to Katsuta Station (and then taxi for 10 minutes)

Change at Katsuta to the Hatachinaka Kaihin Tetsudo Nakaminato Line, get off at Nakane Station and walk for 25 minutes. 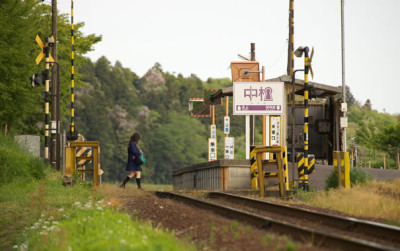 A visit to the Torazuka Kofun gives you a nice excuse for taking the rustic Hitachinaka Kaihin Tetsudo Railroad (which runs along a total of 14.3 km of track). You get out at this station (Nakane) and then walk for about 25 minutes. This station is actually quite famous among railroad fans for being out in the middle of nowhere – with nothing but a platform with a simple shelter – no one to take your ticket – and hardly a house to be seen in the vicinity!

I have written about other interesting Kofun in Tsukuba and the surrounding area:

* The name Torazuka Kofun (literally – the Tiger Mound Tumulus) got its name from an interesting local legend. The Soga Brothers, whose story of avenging their father`s murder has been reworked again and again over the years in Japanese theater and literature, are said to have fled to what is now Hitachinaka (after having exacted their revenge), hiding out in the burial cave that are now named after them – Ju-goro- ana (the brothers` names were Ju-ro and Goro, so the caves are now called the Ju-ro- and Go-ro holes!) ,. When Ju-ro`s wife, whose name was Toragozen, got word of where her husband was, she went to be with him. Tragically, or so the story goes, Toragozen became ill and passed away – and a large tomb was built for her. It was called the Torazuka Kofun in memory of her.

An interesting way for the locals to explain the presence of large tombs whose origins were a mystery to them.