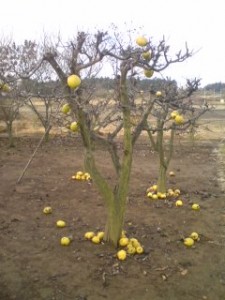 This past weekend I was taking some friends from abroad on a little walking tour of some of Tsukuba’s old neighborhoods. As you can imagine they had a lot of questions about the temples, shrines and sacred stones that I showed them. They were also quite amazed at the size of many of Ibaraki’s old MON-DACHI (gated) houses, and the Japanese style gardens contained within their walls. One thing that really surprised them was the fact that citrus fruit (mostly mikan, natsu mikan, and yuzu) could be seen in the gardens of nearly every house. These were often visible from the roads, as they were growing on trees which had grown higher than the walls which surrounded these traditional, old housing compounds. My friends had associated such fruit with warmer climes, and in fact  Ibaraki  is the northern limit for mikan cultivation in Japan*. Sitting with legs in the kotatsu (heated table) with some tea and a basket full of mikan while watching TV is for many Japanese a quintessential image of winter. I have some local friends who occasionally roast their little oranges over the kerosene heater — they say it’s better that way than plain! Of course some people also freeze them to enjoy as summer treats. 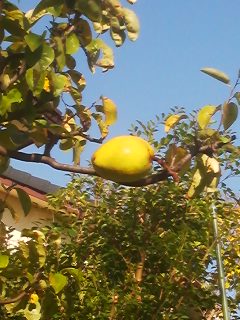 A Japanese quice (karin) hangs oddly from the tree- though the fruit does not seem to be HANGING at all.

Even more surprising for my guests was finding a medium-sized tree bearing golden-yellow fruit which appeared to be large, slightly mishapen (as if swollen by some allergic reaction) pears. Though they looked heavy, they did not hang vertically, but appeared to be stuck onto the tips of their branches and pointed, it seemed, in all directions. Standing to admire (and puzzle at) them we caught a whiff of their sweet and sour scent as it came wafting towards us with a breeze. They guessed it was a type of guava, but couldn’t imagine that they grew in temperate zones. In that they were correct. These were not tropical fruits. They were looking at KARIN, a relative of what is known in the West as quince.

Karin (pseudocydonia sinensis) were introduced from China centuries ago, though it is not certain exactly when. Now they are common decorative trees found especially in the gardens of houses in Central and North-Eastern Japan. Their flowers bloom in spring, appearing together with their fresh leaves. The fruit come out in autumn and are enjoyed for their unusual beauty and special aroma (some bring them inside the house as a room freshener). 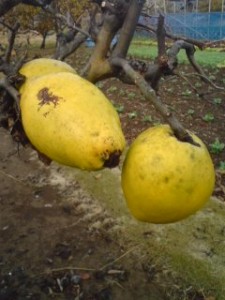 Karin cannot be eaten raw. Many Japanese use them to make a liqueur, and even more cut them up into thin slices and pickle them in honey. This is then added to hot water and used as medicine for sore throats and coughs.

You might have noticed that Japanese cough-drops are made from karin because you can find a picture of the fruit on the packaging. My strongest memory of the Japanese quince trees are from a trip to Lake Suwa in Nagano Prefecture. In the towns around the lake the streets were lined with these trees and the fruits were actually covered with protective wrapping. I guess they were destined for the cough drop (or the jam) factory. In that part of Japan these fruit are referred to as marmellos (which they are not), the Portuguese word for quince (which is actually the etymology of the word marmalade!

Another strong memory is of being served quince tea by an old woman in Korea who was worried about my bad cold. I bought a big jar of quince jam (I think karin is HANJA in Korean) and brought it back to Japan where it has helped me through many a sore throat.

The quince familiar to Europeans and Middle-Easterners (cydonia oblonga) has an interesting story as well which you can check out here. 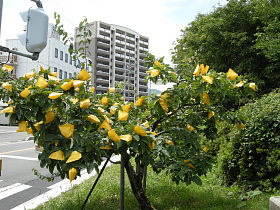 I have found few things that are simple to understand in Japan, and even with a topic as seemingly straightforward as the karin I ran into some serious confusion. It seems that the same name, by that I mean both the same pronunciation and the same Chinese characters, are also used for a completely different plant — the rosewood tree. 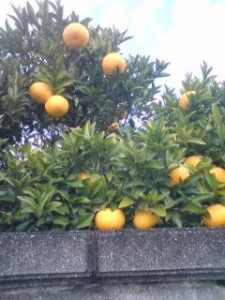 Citrus fruit in a Tsukuba garden

* Many people are under the mistaken impression that Mt. Tsukuba is the northern limit in Japan for growing MIKAN. This was and still is something  often repeated as a truism, I believed it as well. The reason for this is that it WAS true! Now citrus fruits, including mikan, are grown as far north as southern Fukushima Prefecture. 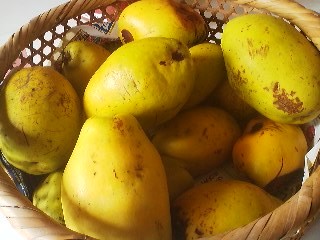 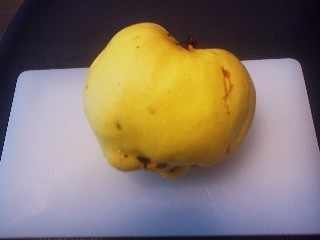 The Karin that I had selected to turn into tea

After a thorough washing, slice a karin (Japanese quince) thinly and carefuly remove the seeds 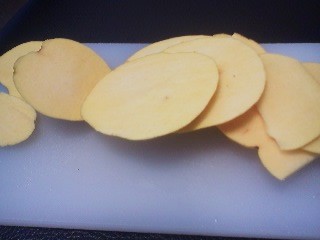 Place on a rack or tray 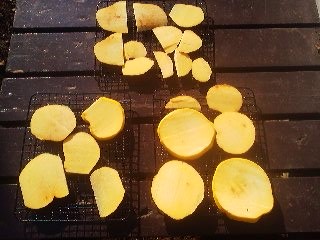 Put one dried slice in a tea cup

Add hot water and a spoonful of honey

Sweet, tasty and supposedly good for your throat!