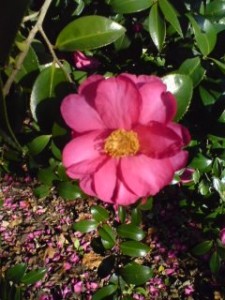 Though very similar to camellias, the sazanka’s petals fall off individually while camellia flowers plop off whole! 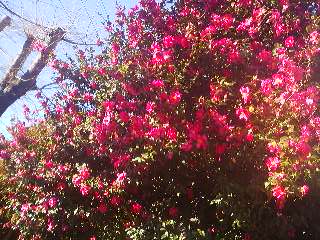 They bloom along roads, in parks or in gardens – beckoning subtly from amongst the evergreen foliage of their trees-which may stand alone -but which more likely have been planted in rows, close together, so that their branches can interweave, forming hedges which demarcate the property lines of many houses and office buildings. They are the red, white or pink flowers of the sazanka (山茶花), and as the autumn leaves have faded away, they stand out as one of the handful of plants in Japan which bloom in winter, the season whose arrival they announce. Tsukuba is full of them- at this time of year you could almost nickname it Sazanka City! 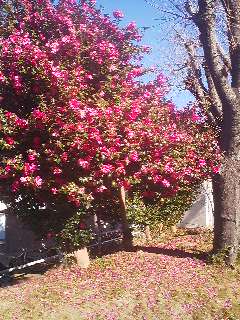 Sazanka, or sasanqua as spelled in English, is a tree native to southern Japan. Though it also exists in parts of China, Westerners first reported encountering it in Japan, and its scientific name (as bestowed by the German Scientist Engelbert Kaempfer in the early 18th century), camellia sasanqua, thus derives from the Japanese. This name (in an archaic form, sanzaka), however, did not appear in any written texts until the Muromachi Period (1392-1573). Before that time, it seems that this tree and its flowers were not well known, and in its original form there were only white blossoms. In the Edo Period, though, the sazanka enjoyed great popularity (and a new pronunciation, the present one) as a decorative tree, and many varieties (about 200) and new colors were developed. Its hard wood was used mainly to make the handles of agricultural tools and charcoal, and its seeds to make oil for cooking and cosmetics (hair oil). 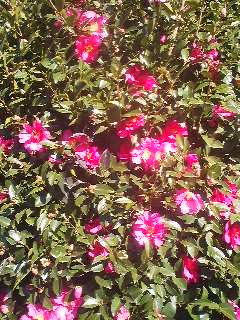 It might seem surprising that in art and poetry, besides being a symbol and keyword of early winter, these flowers are usually used to evoke feelings of quiet loneliness, weakness and fragility. This could be because their delicate petals break off and fall away at a mere touch. Even when not interfered with, each flower falls away a few days after blooming, while new short-living blossoms burst forth from buds. Another reason could be that they are often seen covered with snow. I have been going through numerous haiku (remember that sazanka were not known in the classical age of Japanese poetry) which use the sazanka to create a somber atmosphere. Here is one by Fujita Shoshi:

Sazanka — like this journey of mine, into the sunset
(my translation) 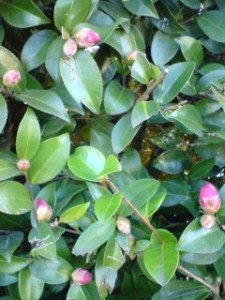 In this season in Tsukuba you cannot go very far without seeing sazanka. Foreign residents encountering them without any cultural baggage would most surely be puzzled by the poets’ traditional association of these bright and shapely flowers with the sad and vulnerable. 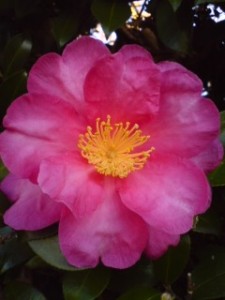 For the general Japanese public these days, mentioning sazanka instantly brings to mind visions of winter and winter bon-fires. This is because of a universally well-known children’s song (it is — or was – in everyone’s elementary school textbooks) called Takibi, or bon-fire, by Tatsumi Seika and Nomura Shichizo and first released in 1941. Its lyrics go like this: 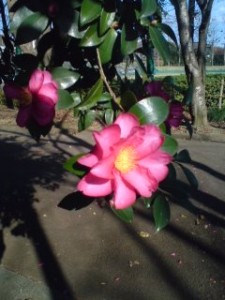 ..which I translate as:

1) At the corner of a hedge-lined path there is a bon-fire going, burning fallen leaves.
Shall we warm our hands by it? Sure, let’s! A northern wind is blowing pii puu!

2) A path abloom with sazanka ! There is a bon-fire burning fallen leaves.
Shall we warm our hands by it? Sure, let’s! Our little hands are itchy from the frost!

3) A winter wind whips through the cold path, there’s a bon-fire, burning fallen leaves.
Shall we warm our hands by it? Sure, let’s ! Thinking about what to do as we walk along!

Here’s how the melody goes.

The first thing to consider when deciding whether the flowering bushes you see are sazanka or tsubaki is the time of year. Sazanka will start to bloom from late November and will continually drop petals and produce new blossoms through February. Camellia on the other hand will start to bloom later in winter (my camellia tree is just starting to bud now) and will continue to bloom through April. Thus the flowering hedges and trees that you will see for the next few weeks (sazanka are thought to be resistant to auto exhaust fumes and are thus commonly used to adorn this country’s roads and highways) are almost surely sazanka. 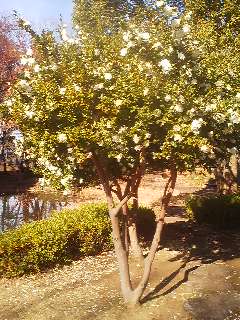 While most SAZANKA in Tsukuba are reddish-pink, some, like these around the pond at Matsushiro Park are white- others, like those below. are pink 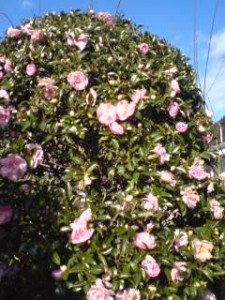 Another pointer for telling the difference is by looking at the ground below the blossoms. The sazanka’s petals fall away one by one to the ground. Tsubaki (camellia) however, plunk down to the ground whole, as a complete flower. This is one reason why the flower became highly regarded by and symbolic of the warriors of the Edo Period (they were like cleanly severed heads). Thus, if you see petals strewn on the ground, it is a sazanka tree, and if there are whole flowers it is tsubaki.

When you step outside and head off by car, bicycle or on foot, keep your eyes open for sazanka. You will be surprised how many there are. If you have a chance, you might want to stop for a closer look. There is so much beauty around us everyday. Don’t pass it by. 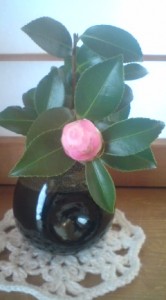 A sprig of budding sazanka makes for a seasonal decoration in Hojo, Tsukuba