The food most famously associated with Ibaraki Prefecture, and especially its capital, Mito, is NATTO (納豆), the gooey, slightly smelly, fermented soy beans that all foreigners are supposed to hate.

Once, a concerned convenience store worker asked me if I realized that what I was purchasing was NATTO –”Okyaku-san, kore wa natto desu kedo” (Sir, do you realize that that`s natto  …. ?) — she simply could not imagine that I would consciously want to buy it, let alone that it would be one of my favorite foods! Many Japanese families seem to take special pleasure in serving this local staple food to non-Japanese friends that they have invited over for a home cooked meal. Mischievous and expectant smirks can hardly be contained on the children’s faces as the beans are brought out. There is then an explosion of sheer glee and satisfaction as the guest(s) register(s ) his/her dislike for what was served. For the Japanese family this experience has been proof that all is normal in the world!

The disappointment (and even unease) is great if the foreign guest actually enjoys the natto! 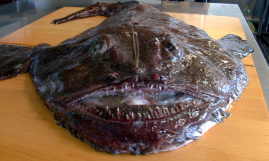 However, because it is a cheap food which is eaten EVERYDAY by many, natto could not be considered the local DELICACY, a term which would refer to a more expensive, harder to get food, that most people might enjoy once a year, or once or twice in their lives, if ever. For that title, Ibaraki Prefecture (and southern Fukushima) has ANKO NABE, a winter stew containing lots of vegetables and the skin and most of the organs of a deep sea dwelling fish called ANKO, which I have found translated into English variously as monkfish, goosefish, frogfish, devilfish and what I feel to be most accurate – anglerfish. These names reflect the appearance of this fish, which most people I have asked describe as grotesque, surely a result of its having evolved to live deep down on the ocean floor, mostly submerged in the mud. Despite its looks this fish was so highly regarded as a delicacy by Edo Period (1600-1868) connoisseurs that there was a saying: In the West (Western Japan) fugu, in the East anko! Recipes for it can be found in the most famous pre-modern cookbooks, and it was also offered by the Mito Clan to the Imperial Family. 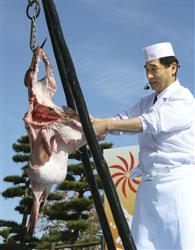 Between November and March each year, most inns and guest houses along the Ibaraki Coast, from Oarai on up, serve this local specialty to their guests, for many of whom, partaking of anko-nabe is the main purpose of their stay. Since the anglerfish is too soft to be cut up on a board, it has to be hung from a suspended hook by its unusually large mouth. Even restaurants in Tsukuba that serve anko-nabe, will have an anglerfish, or just the remaining skeleton, hanging outside, in front of the entrance. This dramatic style of butchering is called tsurushi-giri, which in itself has become a tourist attraction along the coast, as seasoned performers flamboyantly proceed to skin the fish and remove its organs one by one (not my cup of tea). 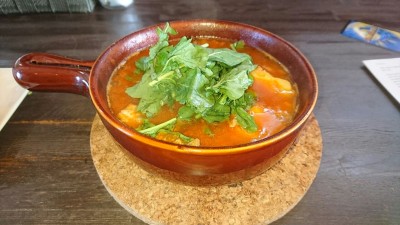 The chef at Quattro, a restaurant in Matsushiro, Tsukuba, cooked up this anko stew for me, Italian style!

Until the 20th century, hardly anyone far from the Ibaraki coast could have enjoyed anko, as it should be eaten as fresh as possible, especially its prized liver, an-kimo (called the Japanese foie gras). Now, however, supermarkets throughout the country sell anko-stew packets to be enjoyed at home. Still, I would say that this fish is BEST when fresh, and for the most rewarding anko-nabe experience you will need to travel up the Ibaraki coast (by car or train) to Oarai, or even better, to the quaint fishing port surrounded by cliffs, on the Ibaraki-Fukushima border, Hirakata (平潟), the anko capital of Japan. 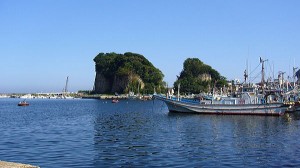 Famous for its Anko restaurants, Hirakata, in northern Ibaraki was devastated by the Tsunami of March 11th 2011 but has since picked itself back up out of the rubble.

I have heard that before the tsunami (and nuclear disaster) of 2011, eighty percent of all the anko consumed  caught in Japan were hauled into this tiny port though it probably much less now ( and I’m think the anko being brought in comes from more distant fishing grounds). The little town is packed with inns and guest houses which have anko-nabe hot-spring packages, which include an overnight stay. Most of these go for about 15000 yen per person (with 2 meals), making it a not very expensive way to have a VERY SPECIAL Ibaraki experience. 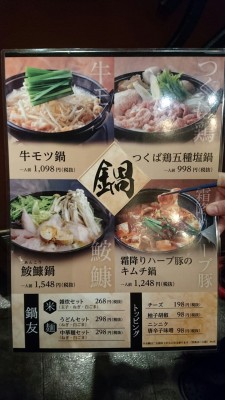 The menu at MONDOKORO, a restaurant specializing in Ibaraki Prefectures local cuisine (At the Dayz Town in Tsukuba) shows some of the winter stews they serve – the one on the lower left-hand side in their ANKO NABE.

In Tsukuba you can enjoy a reasonably priced anko-nabe set at the restaurant called ICHINOYA, just off Higashi Odori, near the Ichinoya Yasaka Shrine.

I can’t say that anko nabe is the most delicious thing I’ve ever tasted, or even delicious at all. In fact, for some ,the first time negotiating the never seen before, rubbery fish organs ,might turn out to be a Kafkaeske experience. However, there is NO DOUBT that it is a very special way to experience winter in Ibaraki. A small inn, toastily heated, yukata robes after hot springs, a huge pot-full of steamy anko-stew with enough beer and sake to make it delicious. Perfect!

Though there is a saying – Anko wa ume no saku made – (you can have anko until the plum blossoms bloom)- I would say that the earlier in winter you have it, the better. 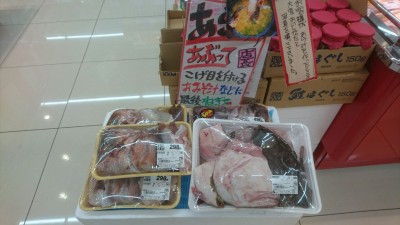 Do-it-yourself ANKO NABE packs on sale at a Tsukuba supermarket. 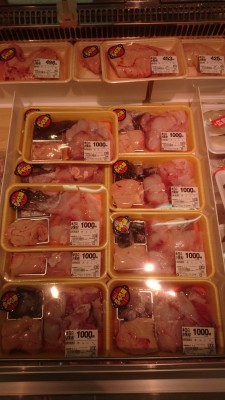 Some more packs of anko
parts so that you can cook up you own monkfish stew at home!

When asking for it at the supermarket, ANKO the fish can be easily confused with ANKO the sweet bean-paste. Make sure to say SAKANA NO ANKO (anko, the fish) or ANKO NABEH NO ANKO (the anko used in anko nabe) when looking for it! 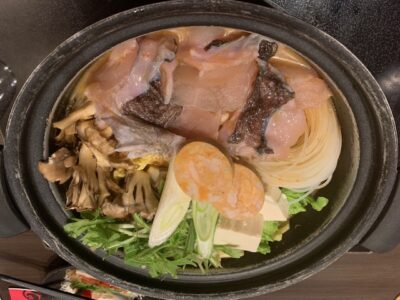 When you order the anko nabe at MONDOKORO in Tsukuba, this clay pot is place on your table, where it is cooked (with the lid on). 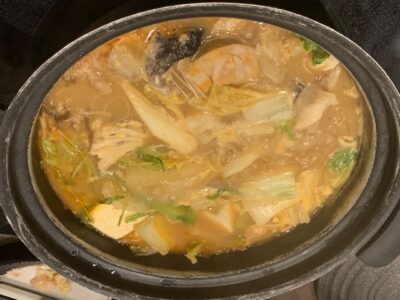 After it boils for a bit, you take off the lid – and Voila! This restaurant’s broth is quite spicy -a dn tastes uncannily like that of MISO RAMEN!