Full-of-Surprises Exhibition Calls on You to Remember Mt. Tsukuba’s Glorious (though now erased) Buddhist History (thru November 23 at the Tsukuba Art Museum) 20 November, 2020 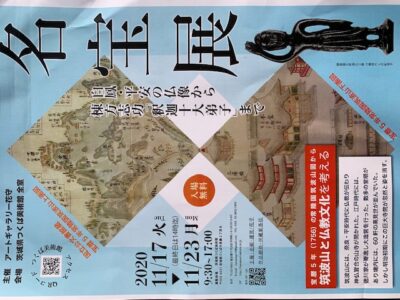 The poster for the exhibition reads: “Exhibition of Great Treasures – From Hakuho and Heian Period Buddhist Images to Munakata Shiko‘s Ten Disciples of The Buddha”. ENTRANCE FREE! In the red rectangle we find: “Thinking about Mt. Tsukuba and Buddhist Culture with the 1756  MAP OF MT. TSUKUBA IN HITACHI PROVINCE”. Below that, in the white rectangle it says: “Buddhism was introduced to Mt. Tsukuba in the Nara and Heian Periods when a Syncretic (Shinto-Buddhist) temple was established. Later, during the Edo Period, the Tokugawa Family turned the mountain into a huge temple complex, with numerous halls and pagodas and more than 60 other structures. They were all suddenly wiped away, though, in the early Meiji Period.”

Since earlier that day I had discovered and photographed an old picture of Ikeda Tanenori, the governor of the short-lived Wakamori Prefecture who had supervised the destruction of Chisoku-in Chuzenji, the great Buddhist Temple complex that had long stood mid-way up the southern slope of Mt. Tsukuba (along with dozens of other temples in the area), I was more than  a little astonished by the coincidence* of finding this poster (mentioning the destruction) in front the Tsukuba Art Museum. Though I didn’t have much time, I knew I had to have a look… I mean, it isn’t everyday that the suppression of Buddhism and the systematic destruction of temples and statuary, etc. that took place in the Tsukuba area are publicly discussed (it is treated something like the local dirty laundry!).  So I rushed inside for a quick peek – and was surprised (and a bit puzzled at first) by what I found.

To be continued…. (this exhibit needs a lot of explaining – but if you are near Tsukuba Center, by all means, go!) 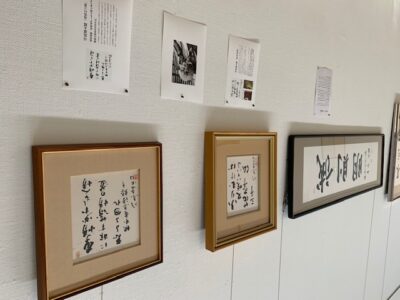 At the entrance to the exhibit, before you reach the reception desk (where your temperature is checked and telephone number recorded) are works of calligraphy by historical novelist and essayist Shiba Ryotaro,  and Admiral Yamamoto Isoroku (the planner of the attack on Pearl Harbor), etc. This had me wondering what this exhibit was really about. 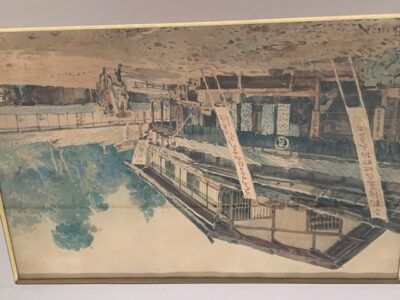 The exhibition already began out in the hallway leading up to the “check-in” desk where I would have to have my temperature taken and leave my phone number. The first works that lined its wall were pieces of calligraphy – and not by famous calligraphers, but by men famous for other achievements. First there was a work by  historical novelist/essayist Shiba Ryotaro, and then one by Admiral Yamamoto Isoroku! Then, after a painting by Goseida Horyu II, and a pattern drawn on a hanging scroll by the Ibaraki-born potter Itaya Hazan, I was wondering what this show was all about. 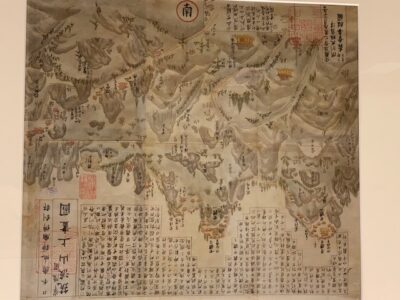 Replica of one of the “Mt. Tsukuba in Hitachi Province Maps” of 1756 showing all the various Buddhist and Shinto structures that once adorned the mountain. Now, besides the recently built Omido Temple, only the Shinto shrines remain. 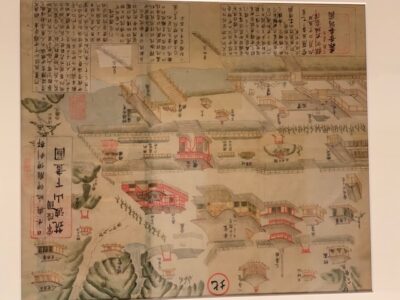 A second map, this one showing all the temple buildings which once stood on the site now occupied by the Mt. Tsukuba Jinja Shrine. I have translated a detailed discussion of these maps, part of a book by Junichi Saga.

Upon entering the “main hall” of the museum, I was greeted by a written-word-slide-show being projecting on a wall. Each successive slide showed a couple of sentences – sometimes superimosed over images from the exhibit. There were only a few slides in the set, and they basically told the story, so briefly told on the exhibition poster (shown above) with only a few added details (for example about how the fanatic pro-Imperial, Anti-foreigner Tengu Faction, had occupied and taken over Mt. Tsukuba in the 1850`s (before the fall of the Shogunate).

Giving the wide room a quick scan, I saw large Esoteric Buddhist-themed hanging scrolls to the right (reminding me of the souvenir shops in Kathmandu, Nepal!), and lots of calligraphy on the left. It was as if there were an Indian/Tibetan influenced world to one side and a Chinese influenced world on the other. Hmmmm

Moving over to the right, I found the replicas of the old Mt. Tsukuba maps. I spent a long time examining them. I had been accustomed to looking at much smaller versions found in Dr. Junichi Saga`s book on Mt. Tsukuba: KANGITEN, which I have translated into English. Prayer halls, pagodas and shrines dedicated to dozens of the “Gods and Buddhas” important in the world of syncretic Esoteric Buddhism – all placed on the mountain (which was located to “unlucky” northeastern direction (KIMON) from Edo Castle) to protect the Shogunate from evil energies.

Near the maps, but away from the wall was the old TANJOBUTSU, which must surely be a valuable Buddhist artifact – but apparently unconnected to Mt. Tsukuba. And neither were any of the other Buddhist images on display related specifically to the mountain.

Though I didn’t have much time, I went from work to work, piece to piece… dozens of them… all appealing and interesting in their own way… with each explanatory plate ( explanatory paper, to be exact) leading to the thrill of recognition. Yes, each painting and each work of calligraphy had been created by someone well known – either on a national scale or on a prefectural scale. But while I found it all very stimulating… I still didn’t get it. What was it all about? 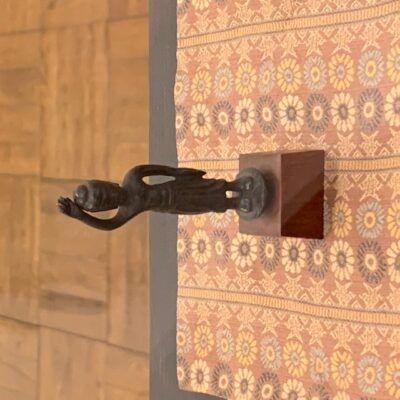 The greatest “treasure” of the exhibition is this tiny TANJO-BUTSU 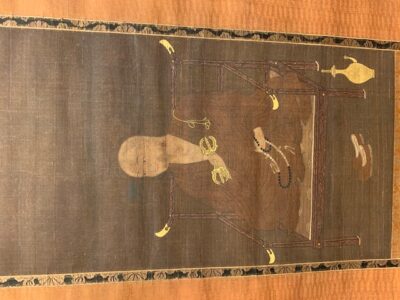 An Edo Period depiction of Kukai (Kobo Daishi), the founder of the Shingon School of Esoteric Buddhism 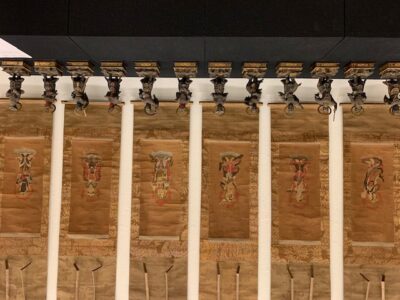 Images of the 12 Divas 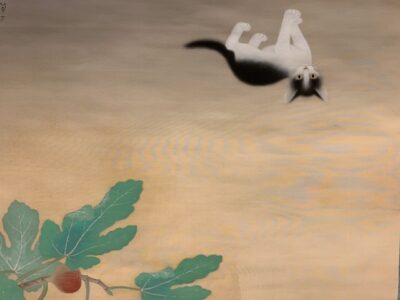 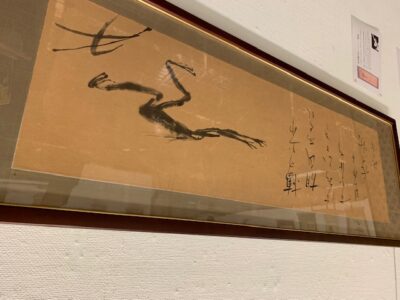 Calligraphy by Akutagawa Ryunosuke, based on his short story Kappa.

Meanwhile, as I moved through the gallery, I was being shadowed by someone, a woman apparently working for the exhibition, who stayed behind me, a few paces back, moving with me no matter where I went. I felt it was only natural… I mean I did look pretty suspicious… with my big backpack, heavy laden with books, and the plastic bag loaded with citrons that I was lugging around. But after a few minutes, I started to feel a little uncomfortable, her gaze burning on the back of my head. Finally, I went up to her and asked if I could put my things on the vacant chair I saw in the corner.

Well, that broke the ice, and I soon realized that it was not suspicion that had her near me – but a desire to talk…. it was Midori Tanuma, the woman who had put together the show… and since I seemed so interested, she wanted to know what I thought.

After a chat with her (which had me dangerously close to being late for my next appointment) I finally got it ! Let me explain what the whole thing is about. 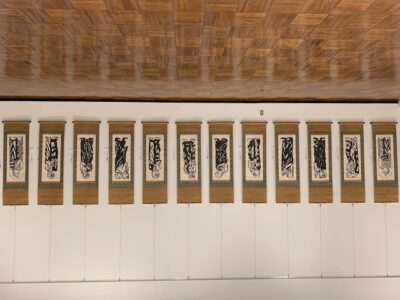 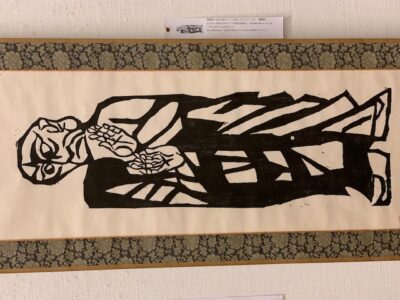 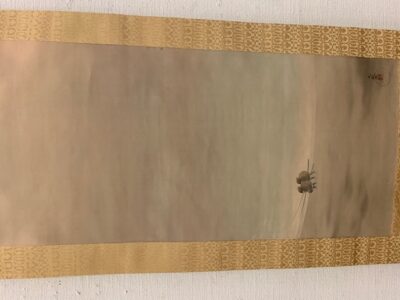 You see, Tanuma-san works for a company called Art-Gallery Hanamori, which is based in Tokyo and produces “art-events” of all sorts around Japan, besides holding exhibitions and lectures on their own premises and carrying out restoration projects. The pandemic has of course ground the exhibition business to a virtual halt. But just last month (October 2020), she saw the Mt. Tsukuba Maps of 1753 for the first time. She also learned (also for the first time) about the fate of the great Mt. Tsukuba Temple Complex – and it came as a great shock to her, the injustice of all, of course, but also because she is a great admirer of Buddhist, especially Esoteric Buddhist art, and lamented the temple being turned into a shrine.

Being an art producer (and not a writer, musician or artist herself) she decided to express her feeling in an exhibition – and she found that there was a sudden opening at the Tsukuba art Museum! So getting replicas of the Mt. Tsukuba Maps, she then proceeded to scour her own gallery’s collection for works to be used in the show. She selected anything connected (even very indirectly) with Esoteric Buddhism (the type of Buddhism that had been practiced on Mt. Tsukuba), the rise of the Anti-Buddhist movement (as manifested in calligraphy by members of the Mito Tokugawa Family and others, like Katsu Kaishu, who helped bring about the Meiji Restoration – or even Ibaraki Prefecture itself! So Shiba Ryotaro’s calligraphy was selected because he wrote about Esoteric Buddhism – and Admiral Yamamoto’s because he had also lived in Ibaraki!

So those are the motifs (Esoteric Buddhism, the Meiji Restoration – and Ibaraki Prefecture) that  (ever so loosely) tie the show together! Coming across the Mt. Tsukuba Maps and Mt. Tsukuba`s “secret” Buddhist history gave Tanuma-san an idea for a theme that let her use a wider range of works (i.e. the Esoteric Buddhist paintings and sculptures) from her gallery’s unusual collection. 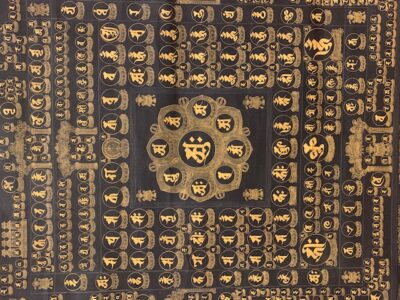 A Mandala depicting the Buddhist cosmology in Sanskrit letters 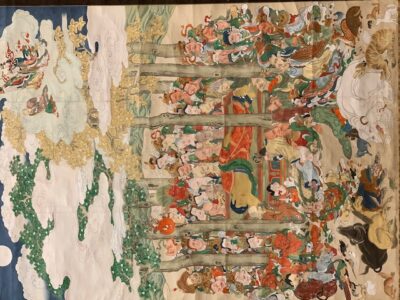 The Death of the Buddha 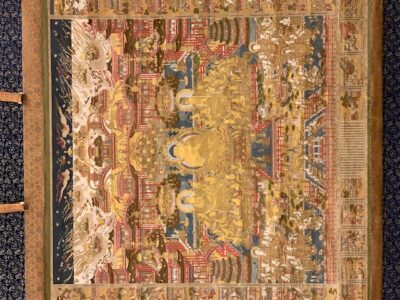 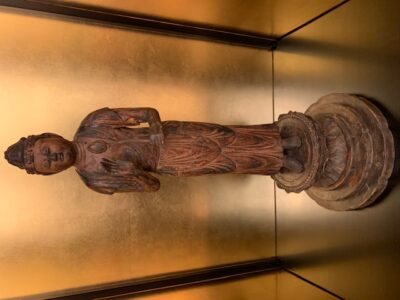 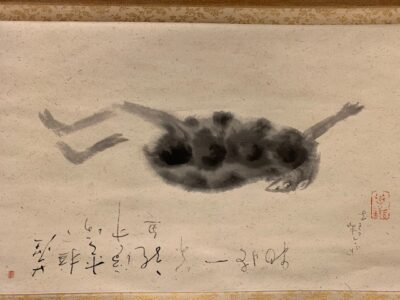 A Kappa (water-sprite) by Ogawa Usen (1868-1938), one of Ibaraki Prefecture’s (locally) famous artists. He lived in Ushiku, just south of Tsukuba. 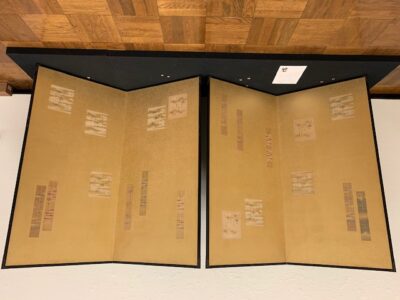 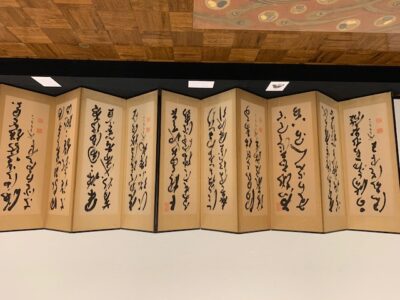 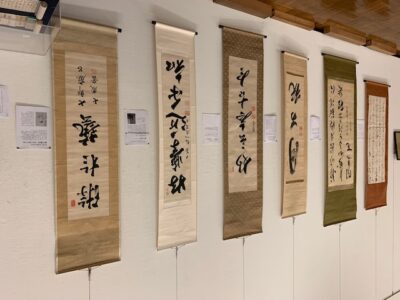 Calligraphy by the last Shogun (Tokugawa Yoshinobu) and his younger half-brother Akitake. 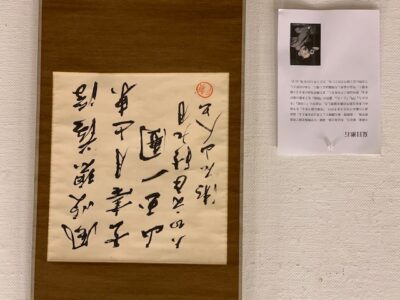 Calligraphy by the great Novelist Natsume Soseki – besides  being an iconic figure of the Meiji Period, I cannot see how this piece fits into the exhibition – though it is exciting to see it there! 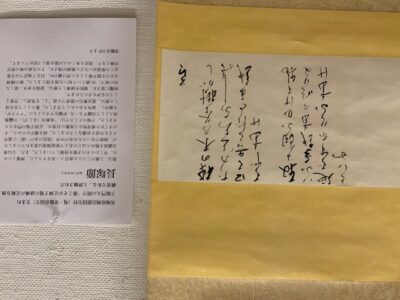 Calligraphy by Nagatsuka Takashi, a novelist (author of TSUCHI) born and raised in Ishige (now part of Joso City), just to the east of Tsukuba. 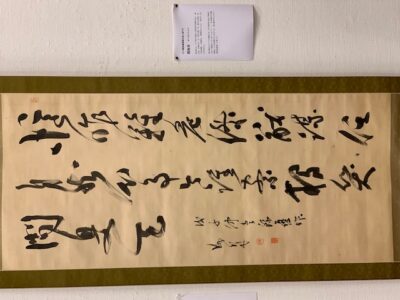 Calligraphy by Katsu Kaishu – who helped negotiate the surrender of Edo Castle and the abdication of the Shogunate. Just another one of the “names” that elicits gasps of recognition at this exhibition 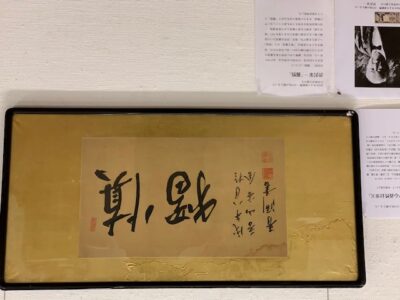 Calligraphy by Shibusawa Eiichi, the “Father of Japanese Capitalism” and in his younger days, a student of “Mito Studies”, an intellectual driving force behind the Meiji Restoration. 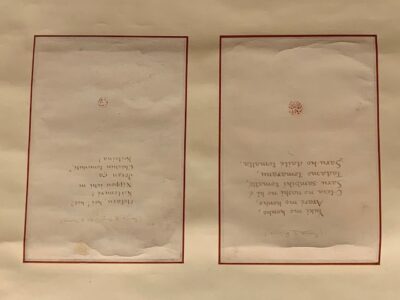 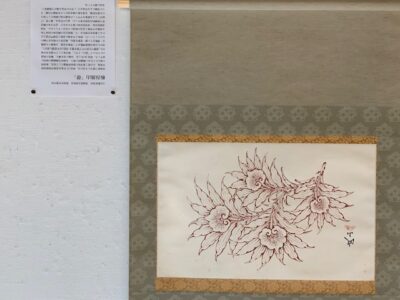 A design by the locally famous potter Itaya Hazan, often called the Father of Modern Ceramics in Japan.

* This was in fact the second surprising Buddhist-related coincidence I had at this very same spot. And oddly enough, the first one also happened when I had arrived (years ago) at the Tsukuba Art Museum after having come straight from the Tsuchiura Library.  You see, I had found a book in Japanese (which had just come out at the time) called “Shinran and Ibaraki”. The minute I saw it, I knew that I would have to borrow it for my student Tomoko-san, originally from Ishikawa Prefecture and very interested in Shinran (the founder of the Jodo Shinshu Sect of Buddhism). Just a day earlier she had seemed very interested when I was telling her about Shinran’s connection to Tsukuba in Ibaraki. So finding that book was a strange coincidence in itself – and without giving it a second thought I borrowed the book and thought about handing to her the following week. Getting off the bus, though, in front of the Tsukuba Art Museum (back in the days when the bus stopped there) I looked up – and there was Tomoko! We greeted each other with happy surprise – I had never run into to her outside of class before – and I handed her the book. After I’ve never run into her again since. It was just that one time!