Dry Winter Air Can Make Life in Tsukuba (and the rest of the Kanto Area) a SHOCKING Experience- a static-electricity-purging key-chain can help take the “spark” out of your life in Japan` most shocking prefecture! 30 November, 2020 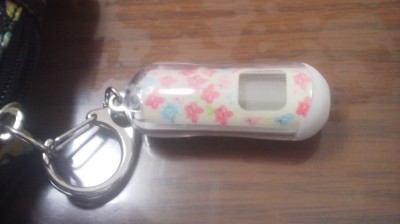 Static electricity purger on a key-chain. Sold at “home centers” and appliance stores, these are essential items for people who suffer frequent static shocks. Since Ibaraki Prefecture`s dry air makes it Number One on the Static Shock List you might want to get one for yourself

Stretching approximately 3,500 km from north to south, it is only natural that the Japanese Archipelgo- from sub-arctic Hokkaido to sub-tropical Okinawa , exhibits great climatic variety. What IS surprising , however, is the astounding climatic variety exhibited not north to south, but EAST to WEST, along the same latitude lines – at quite short distances. I am talking most specifically about the different weather systems created by the high mountains which run down the center of Honshu Island (Japan`s largest). In winter, moist air drifting over from Siberia runs into those mountains. With its progress blocked this air dumps large amounts of snow, sometimes many meters deep, onto the Japan Sea Side of Japan, making that area the snowiest heavily populated area in the world ( a record of 8 meters once accumulated in parts of Niigata Prefecture). 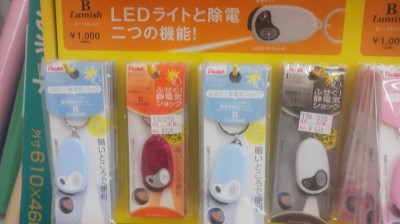 On the other hand, or should I say- on the other side of the mountains, not very far away in terms of kilometers, on the Pacific Side of Japan, there is hardly EVER any snow. This truly fantastic contrast has been most famously put into words by Nobel Laureate Yasunari Kawabata in the opening sentence to his Novel Snow Country (Yuki Guni) that goes something like this: “The train entered the tunnel, and when it came out the other end we were in Snow Country.”

It is a contrast that I recommend everyone experience at least once in their lives with their own eyes- the short Shinkansen ride from snowless Tokyo through a tunnel, and into a world of white and bright. Amazing!

Without a doubt, the lack of snowfall makes the Pacific side of Japan a very convenient (though less beautiful) place to live.  I guess that is why most of the country`s population can be found there.

However,  the dry air that keeps the Pacific Side`s roads and walkways snow-free, making it so liveable, has a dark side- causing stress, even dread, for many.

You reach out to touch the doorknob – “crack” “Ouch, I got a shock!” Sometimes sparks actually fly. You reach out to open the car door – “ouch!” You inadvertantly (or purposely) touch someone- a relative, a friend, a lover, a shop-clerk: “Ouch!” (could that be why bowing became the custom in Japan and not hand-shaking?!)

Dry air helps static electricity build up in your body.Tsukuba is one of the driest places in winter in all of Japan (Ibaraki Prefecture, in which it is located has the biggest static electricity problem in the country, followed by nearby Gunma and Tochigi).

Those of you who live in moister places might find this hard to believe, but I am often told of  stories of bad shocks (with spark!) and of stress caused by the fear of potential shocks when I ask “How are you?” to friends and acquaintances in Tsukuba from early winter through mid-spring.

Some people suffer more than others. It apparently depends on what you wear- especially shoes (rubber soles keeps static stored up inside you) and how you walk (shuffling your feet generates electricity!). Heavy sufferers become extremely stressed out and are hesitant to touch anything. There are some people I would NOT want to go to a gas-station with (though all Tsukuba filling stations provide special static removing pads which should be touch before taking hold of the nozzle). 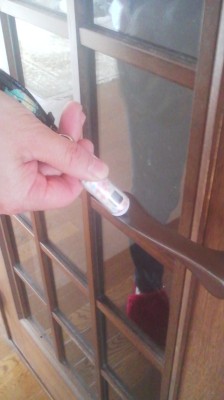 Static electricity purgers are simple and fun to use- touch any potentially shocking object with the purger and not your bare hand- the amount of electricity purged will then be indicated and some purgers will even light up witht electricity you have given off!

But alas, in Japan when there is a fear, there is a product to bring you mental and in many cases ACTUAL relief. For winter and spring the list is long-  vaccinations and masks for the flu, masks again, and an assortment of other producys for hay fever, shovels for possible snow fall …… and STATIC ELECTRICITY PURGER KEY-CHAINS for those who suffer from frequent shocks.

I know many who carry them. They come in a suprisingly wide variety of types and colors and usually go for less than a thousand yen.

Using them is simple- and fun. Just take your purger in your hand before touching any potentially shocking objects. Before using your bare hand touch the purger to the object- all the static stored up in your body will painlessly be eliminated from your body. The key-chains indicator will also tell you how much static left you !

Spring is here, but the air is still dry- and will be so, probably for a few weeks to come. If you find that you are experiencing frequent little shocks –  why don`t you get yourself one of them. Many long-term Tsukuba residents (and locals) consider them ESSENTIAL accessories! 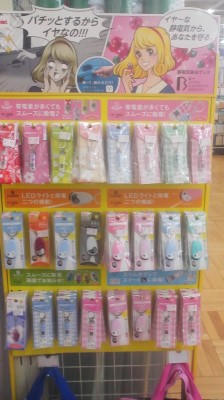