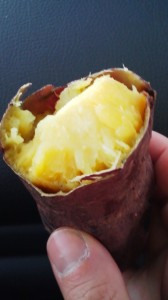 As a boy growing up in New York, I spent summer days impatiently waiting for the RINGING which signaled the approach of the Ice Cream Man in his truck. When my little friends and I did finally detect the sound of his bells somewhere off in the distance, we would urgently beseech our mothers for some change, and then rush out into the street to greet him.

And though now decades have passed and I live thousands of miles away here in the Japanese countryside, its funny how my life, while being so very different, can sometimes seem exactly the same. I was thinking that to myself yesterday as I sat huddled by my kerosene heater trying to keep warm while  anxiously keeping my ears open for an iconic sound of Japanese winter-  the whistle and call of the Roasted Sweet Potato (Yaki Imo) man

I realized that just as I used to spend my SUMMERS waiting for ice cream back in New York, here in Japan I spend WINTERS waiting for steaming hot SATSUMAIMO ( sweet potatoes), roasted over stones and sold from the back of a special little truck.

And as I run out to greet the YAKI IMO man, flagging him down with both arms, boyhood memories always come flooding back. 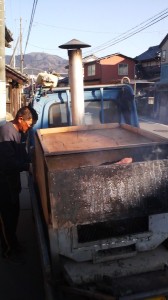 My YAKI IMO ( roasted sweet potato ) being put into a paper bag  in Hojo, Tsukuba. Unfortunately, in recent years many YAKI IMO men have been driven out of business by the avalabilty of cheap and delicious freshly roasted sweet potaoes at just about any supermarket

The sweet potato in Japan (and its cultural role) is certainly very dififferent from that of the spud of the same name which I grew up with. In New York, we ate sweet potatoes, a variety which when baked was very soft ( even creamy) and a deep orange inside- only once a year: on Thanksgiving Day in November.

Here in Japan, sweet potatoes ( SATSUMA IMO) are a major part of the food culture, and culture in general- especially important in autumn and winter.

Harvested in late October and through November, it is common for the Japanese to hold sweet potato roasting events- using the fallen leaves as fuel! Wrapping the freshly harvested spuds in aluminun foil, and gazing into the fire amid the swirling smoke is one the classic ways of celebrating autumn. 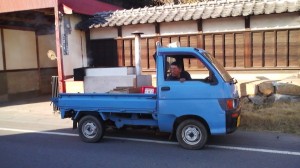 The YAKI IMO truck- Long an iconic feature of Japanese winter, has become less comon because of competition from supermarkets.

Through the winter, YAKI IMO ( roasted sweet potatoes) help keep people warm and feeling full in more ways than one. Naturally, there is the actual heat of the roasted potato itself and its deliciously sweet flavor. But there is also the comforting beauty of its color- a richly hued reddish- purple. I know people who throughout the coldest months keep a few raw SATSUMA IMO on their tables as a centerpiece-  a celebration of the season AND as a visual source of warmth and succor.

When anyone with sweet potaotes at hand feels the urge, they can wrap one or more in some alumimun foil and roast then on a traditional oil or kerosene heater. It is now more common to use the microwave to roast potatoes at home these days, but in this more modern way the perfect softness- the fluffiness of texture the Japanese refer to as- HOKU HOKU – just cannot be achieved. I guess that is why the old style trucks which sell the stone- roasted type ( ISHI YAKI IMO) of sweet potatoes are still around- despte the fact that a cpiple of potatoes can run as much as 800 Yen in this way. 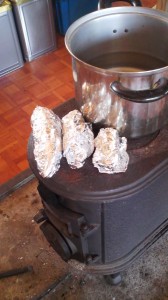 Sweet potatoes roasting on a wood stove in Numata, Tsukuba 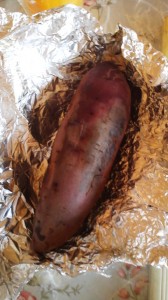 Being very high in dietary fiber ( about 15% of its total mass), the Japanese sweet potato also makes one feel fuller and more satisfied than most other foods ( and makes for alot of non-odorous gas, as well!).

It is also surprisingly nutritious, with only oranges containing higher percentages of vitamin C ( not destroyed with roasting) and it is jam packed with other vitamins and minerals. 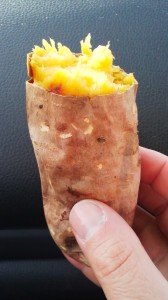 The name SATSUMA IMO (薩摩芋) directly translated means the SATSUMA DOMAIN`S POTATO, and this sheds some light on the story of how this food came  into Japan. The Satsuma Domain ( what is now Kagoshima Prefecture on the island of Kyushu) once controlled the Ryukyu Islands ( Okinawa), to which the sweet potato had arrived, after having been first cultivated in the foothills of the Andes Mountains ( or perhaps somewhere in Mexico) thousands of years ago. It came to Okinawa via China, or perhaps the Philippines, to where it had been brought by the Spanish- not across the Pacific but rather around the Cape of Good Hope in Southern Africa..

( Interstingly in both Kagoshima ( formerly Satsuma) and Okinawa Prefectures, the sweet potato is NOT called satsuma imo but rather  KARA IMO -唐芋- the Chinese Potato!)

It was the Satsuma Clan which soon after, introduced it to the rest of Japan in the late 16th or early 17th century. 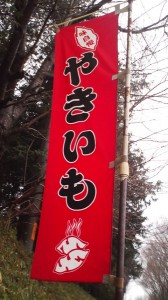 One of many banners leading the way to an ISHI YAKI IMO )sweet potato roasted over stones) shop- it reads YAKI IMO- and on top AJI JIMAN ( We are proud of our taste!) Kurakake, Tsukuba

And it was a good thing they did- because the nutritional yields of the sweet potato ( food energy for humans per square acre of field) are usually more than double that of rice, and it became an essential SURVIVAL FOOD in times of  famine and in more modern times- war.

Many older people that you meet in Japan will tell you that at some points during and immediately after World War II they lived almost exclusively on sweet potatoes.

In fact, the sweet potato has been looked upon with such respect because of this that there are several shrines in Japan dedicated to it ( the nearest one to Tsukuba being the KONYO JINJA Shrine in Makuhari, Chiba)

At first, back when they first encountered it in Japan, people obviously found the taste similar to ( or better than) the ancient Japanese staple food- the chestnut (KURI). For that reason, in Edo Period (1600-1868) texts the spud sweet potato not only as satsuma imo but as HACHI RI HAN or JU-SAN RI ( a play on words with the name KURI).

Let me explain this in a little more detail. Kuri ( chestnut), is usually written with one character- 栗. However, the same two syllables of the word can be depicted with the characters 九( KU- nine) and 里 ( RI-  a measure of distance- which I will inacurately translate here as – a mile). Thus, the food chestnut could be written with characters 九里- meaning NINE MILES.

So those who thought that the sweet potato was not quite as good as the chestnut would call it HACHI RI HAN (八里半)- Eight and a half miles- which is  almost- but not quite nine. On the other hand, those who favored the SATSUMA IMO – and especially those who promoted it- used the actual distance from the center of Edo to KAWAGOE, which was ( and still is) a major cultivation area ( in present day Saitama Prefecture)- which was 13 RI, and called sweet potatoes  JU-SAN RI, or 13 miles- much greater than 9 ( by 4 RI !). 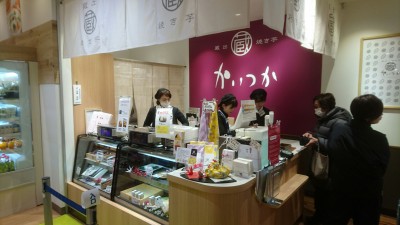 A wildly successful yaki imo shop founded in Kasumigaura City now has two branches in Tsukuba. This smaller one is at the Qt Shopping Mall near the TX Terminal station.

After the Meiji Restoation of 1968, there was a huge YAKI IMO boom, which seems to have lasted up to the Great Kanto Earthquake of 1923. In 1905, there were 900 establishments in the capital specializing in them.

After reconstruction, a craze for everything modern and especially foreign set in, and for a long while roasted sweet potatoes were considered too rustic, and old fashioned- in other words CORNY. 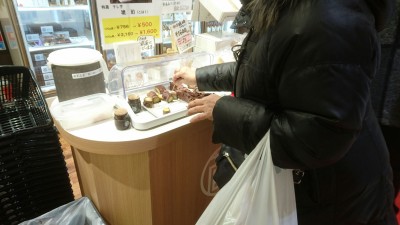 It is called KAIZUKA and they offer free tasting-samples

As I have mentioned above, with the hardships of the war, the SATSUMA IMO came back again to regain its former prominence.

There are now more than 100 varieties grown in Japan, though most of these are used for extracting starch, making alchohol, are feeding livestock. 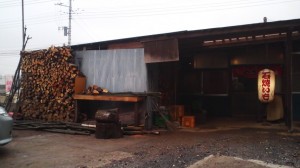 A rustic ( and delicious) Ishiyaki Imo shop in Kurakake, Tsukuba

In Tsukuba, we are lucky to have an abundance of high grade locally grown sweet potatoes. Not only can you get them from the traditional trucks, but there are some specialty shops – extremely  atmospheric, which sell ONLY sweet potatoes!

The one I like best is in the neighborhood of Kuarakake, near the Space Center- JAXA. Its just to the East of the ramen shop Chinrai – just follow the red banners ( with the steaming spuds on them).

More like a shack in the mountains than a shop, you will be surprised to find the place crowded with regular customers- lots of nursing mothers with babies( SATUMAIMO are said to increase lactation). 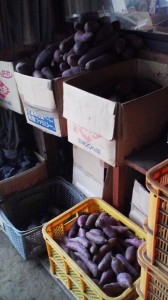 Many local farmers store their one year`s supply of homegrown sweet potatoes in large pits on their property. Since they are originally from warmer climates ( in Central or South America) they do not keep well in freezing temperatures. Tsukuba`s farmers stand them upright in these holes and cover them with lots of straw and bamboo to keep them until needed.

And of course. there are many other ways that the sweet potato is prepared in Japanese cuisine besides roastung. One of my favorites is called DAIGAKU IMO- with large french- fry shaped slices or chunks, coated with a sugary glaze and a dash of sesame seeds. 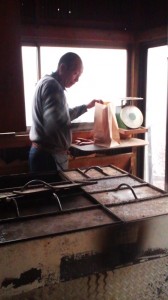 My order being filled. Steaming hot sweet potatoes are weighed and put into a paper bag

Still in winter, I think there is no better way that eating the satsumai imo than as a big, heavy, steaming, beautiful and nutritious- YAKI IMO. They also tend to get sweeter with storage so they are really delicious right about NOW! 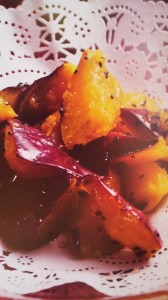 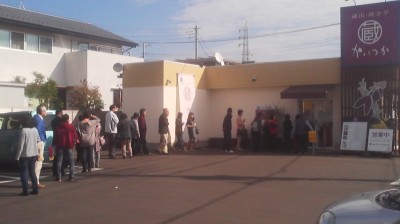 Sweet potato mania ! After being featured on a nationally televised food program, the first of the Kaizuka sweet potato specialty shops to open in Tsukuba ALWAYS has had long lines in front of it. This photo was taken about 30 minutes before opening time