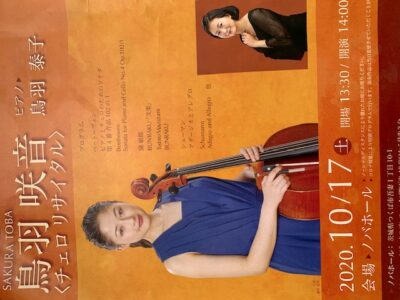 Fifteen year old cello phenom Sakura Toba will be playing at Tsukuba’s Nova Hall tomorrow (Saturday October 17) accompanied by her mother Yasuko Toba on the piano. The program includes the familiar Beethoven Sonata for Piano and Cello and Schuman`s Adagio and Allegro as well as the much more rarely performed BUNRAKU, a ten-minute long piece for solo cello by the Japanese composer Toshiro Mayuzumi. Entry will cost  only 500 yen (as the performance is being subsidized by the Culture Agency) – but only 100 people will be let in (to guarantee proper social-distancing! Door open at 1:30 PM and the curtain goes up at 2 !

After six months of youtube (I’ve watched and listened to so much great and not-so-great stuff online during these “Corona-Days”, I can hardly remember what it was that I’ve listened to or watched !),  I was thirsting, craving for some live music. I was so looking forward to today’s concert, that I walked all the way to Nova Hall in the rain (sans umbrella!).

Getting to the venue about an hour and a half before the box-office opened, I sheltered from the rain (already quite wet) in the Tsukuba Information Office, where I read one of the books I happened to have in my bag ( a novel called 10:04 by Ben Lerner – a work so densely rich and intelligent that I have to put it down every half-page or so just to let what I’ve read sink in – so I can savor the after-taste).

When I went back to the box-office, just before it opened, I found some old acquaintances from my former neighborhood in Hojo, a little town at the foot of Mt. Tsukuba. Among them was Mr. Miyamoto (whose old store-house is one of Tsukuba’s most interesting musical venues), who told me that the concert I had come to see was originally scheduled to be held at his place in Hojo in late spring (only to be be cancelled due to the virus).

Meeting the Hojo people brought lots of memories flooding back, but while we were reminiscing and struggling to make small talk, the tickets went on sale. There were only about ten people waiting there, and after I had my temperature taken (with a remote sensor) and written my contact information on a  slip of paper I`d been given by the Nova Hall staff I was able to pay my 500 yen (!) and get my program (which told me that the scheduled works to be played had been changed!), as I into the the venue’s outer hall.

After a short trip to the men’s room I entered the main auditorium and found only about 50 people, thinly spread out, in a hall that seats 1,000! I took an orchestra seat, on the right side of the hall, and realized I would have the whole section to myself – what a life!

The program told me that the Beethoven and Schuman were out (to be replaced by Haydn’s Cello Concerto No. 1). Happily, the Maizumi piece I was interested in was still on.

As I waited for the show to start, I pulled another book out of my bag, a selection of poetry from the manyoshu which had me enthralled for a few minutes with it’s sublime sexual inuendos, till the loud, long and very irritating buzzer rang out to announce that things were about to get underway (couldn`t they think of a more pleasant way of letting you know?)

Sakura Toba stepped out onto the stage looking older than her 15 years – and her subsequent playing, showing not only great skill, but also sensitivity, feeling and intelligence, proved she also had a maturity far beyond that of most of her age-peers. Watching her fingers flying all over the cellos long neck with such speed and precision had me understanding why people over the centuries had suspected that musicians like her had made some sort of pact the devil in order to obtain their astounding talents.

Yes, after all the months of low-fi, having the sounds she was wrenching out of her world-class instrument wash over me was more soothing than Japan’s finest hot-spring waters could ever be – and I felt like I was in heaven.

But nothing is ever perfect. It happened to be that up above me to the right, on the balcony, was a mother with her two young sons – one of them a little pre-schooler, who… well, what can I say? He just didn’t stop talking and shouldn`t have been there. But his mother didn’t take him out to the corridor… or do anything at all! In fact she spent a lot of time talking with him!

So while I was in a situation that could have been ideal – great seats at a wonderful performance (by perhaps a future star) and a whole section of Nova Hall all to myself, I found myself burning up with irritation! I glared up at them again and again – but I am sure they couldn`t see me. And instead of concentrating on the music I found myself imagining how I would scold the mother after the show (though I never did. I just walked right out and headed home.) It got so comedically bad in the end (during the encore, Saint-Saens, Le Cygne) that the little kid actually dropped a plastic beverage bottle down to the first level where it made a big smacking sound! To top it all off, the mother sent the older son down to noisily fetch the fallen object while Sakura was still playing!

It always seem to go that way… just when you thought everything was going just right…. 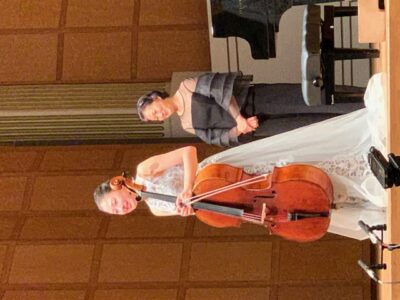 Sakura Toba and her mother Yasuko Toba after their Nova Hall performance (October 17, 2020)