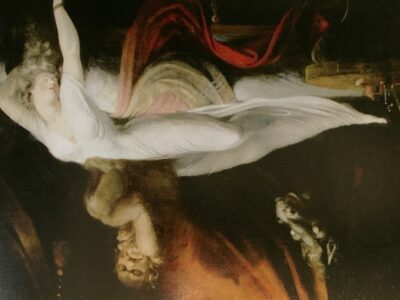 At the crossroads of wakefulness and rest
Like a schoolboy, the night before a big test
I’m on my back and I’m staring at the ceiling’
I’m overcome by this strong creepy feeling
A strange presence seeping up through the bed.
There’s thunder in my ears.
My sheets are made of lead
Then a visage presses up to my face
Oh god, get me out of this place

I’m hurled up and down as I breathe in and out
No matter how I try, I can’t seem to shout
There’s a strange weight pressing on my breast
Is it an incubus or succubus
that’s sitting on my chest
So tied up and I’m wrapped up in pain
Seems like for years
I’ve been bound up in chains
This phenomenon it just defies analysis
But internet says that it’s sleep paralysis

Listen to the Tengooz version here 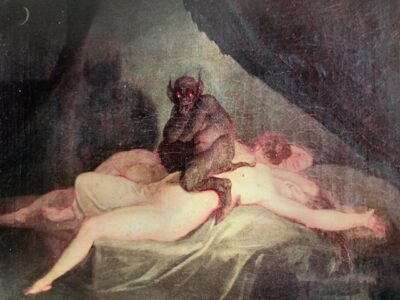 Kanashibari has always been one of our most popular songs, certainly one of our most memorable numbers. Often, people who have caught our act just once, and years earlier, still remember it.
Let me tell you a little about the songs history.

The entire piece generated out of a bass line which was a favorite of Tom Debor, Xenophonia`s bass player. Ascelin Gordon came up with the reggae guitar to go over it. It was up to me to come up with the melody and the lyrics. A few times we had worked on it in the living room at
The Ice Palace (my old house – now a road), and the melody for the A-pattern was pretty much set. The original theme we envisioned, however, was about nuclear waste or pollution or something of the sort, and I even might have improvised once about alien invasions.

While the song was in the process of being written, I had a very traumatic and exhausting Kanashibari experience. For non-Japanese, this expression might need some explanation, but I think the lyrics of the song pretty describe it quite succinctly.

On a sultry summer night, as I slept, it seemed as if a face, human, yet not of the flesh, zipped right up to mine, pressing right up against me. I felt as if I were paralyzed by an electric ray-gun. My whole body tingled like a foot that had fallen asleep. When I inhaled, it seemed as if I hurled upwards and crashed into the ceiling, and then crashed to the floor as I exhaled.
This probably went on for a few seconds, but it felt like the proverbial eternity. For a few days after that, my whole body felt Charley Horse.

When I told Tom about my experience he sympathized and said that he had often had similar ATTACKS himself. Obviously, this phenomenon is not uncommon in Japan as there is a set expression for it, which is commonly known.

So we decided to make this unusual reggae song into something about Kanashibari.

I wrote the lyrics and the chorus melody as I walked all the way to Tsuchiura (over 2 hours) and I especially remember crossing over the bridge at the Sakuragawa River. Our first recording was done at The Ice Palace in my Tatami room. Ryutaro Kawakami laid down the crazed sax solo in what I remember as one take.

We later recorded the song again as The TenGooz, during the Inertia recording sessions. Tanaka changed the feeling of the song with his slide guitar.

We have been keeping the song alive in concert and most recently Michael Frei on sax and Thomas Mayers on guitar have performed it and the rapt faces in the audience as well as post gig comments show that the song is still a favorite.
More on Halloween here