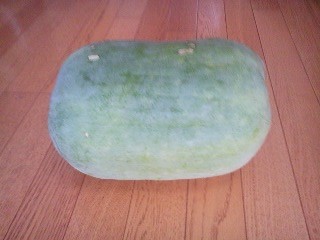 A To-gan (冬瓜) – called either a wax gourd or winter melon, in English, sitting on my living room floor. As I tried to find out what to do with it, the kids had a great time rolling it along – creating an earthquake-like rumbling. 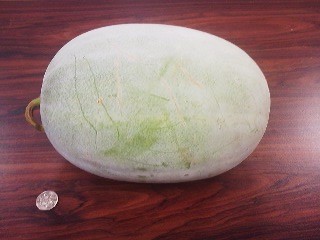 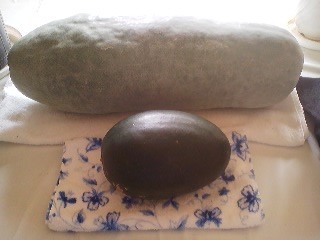 Two wax gourds of different size and shape on display at a community center in Hojo, Tsukuba

Tsukuba might be the SCIENCE CITY ( it was designated so 50 years ago) and it might be full of cutting edge research facilities and institutions of higher learning (as well as an overly large dose of new shopping malls), but it still lies in the heart of one of Japan`s great traditional agricultural heartlands. Indeed Tsukuba City ITSELF is still a major producer of fruits and vegetables (it is No. 1 in Japan in turf grass production!) with large portions of the city`s area being used as farmland. Between the research labs, universities, shopping complexes and housing developments, rice, wheat, barley, buckwheat, chestnuts, leeks, Chinese cabbage, tobacco, blueberries and many other crops are grown.

Besides all the professionals farmers, there are also those who grow fruits and veggies for their own consumption- or just for the fun of it. One doesn`t have to be a landowner or the renter of a house with land- those without their own yards can rent patches of varying sizes for prices that are amazingly cheap (taxes are extremely low on agricultural land and that`s why this is possible). 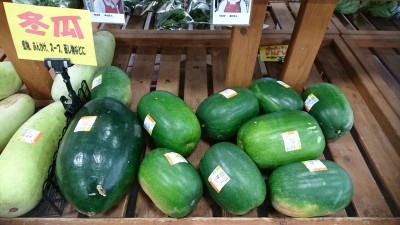 Wax gourds at a farmers market in Tsukuba (September)

There is a surprisingly large number of these amateur farmers. I would even venture to say, with confidence, that growing vegetables is Tsukuba`s most popular hobby.

And since Japanese people (especially native Ibarakians) are proud of – and very generous with their produce, RECEIVING FRESHLY GROWN VEGETABLES from friends, acquaintances and even strangers can be said to be a major part of one’s life in Tsukuba 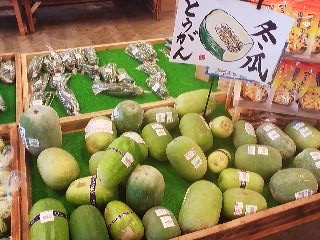 Wax gourds on sale at WAKU WAKU HIROBA, which sells locally grown produce. Each one (considerably smaller than the first one I received), was selling for less than 200 Yen. Some had recipes taped onto them. I have translated one of them- you can find it at the bottom of this post

For someone like me, though, who gets around on foot or by bicycle, it can sometimes be quite troublesome- lugging around heavy bags of potatoes or radishes all day. It must look quite ridiculous, as well (especially in the case of someone like me who looks ridiculous even without all the vegetables!) 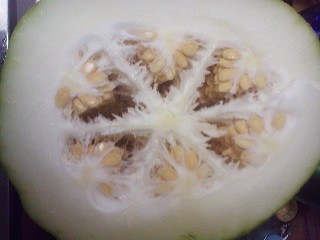 So imagine what it is like to receive a gift of a vegetables (while out walking or cycling around) that are not only large and heavy, but ones which you have no idea what to do with!

That`s what happened to me the other day.

I was making my way down the road minding my own business, when suddenly a call of “AVI-SAN”  came resounding out of the distance. I knew it had to be me that was being called (there are not many other Avis, in Tsukuba, or in the whole of Japan, for that matter), and I looked into the direction from which the voice came and squinted in an effort to get the form waving at me into focus.

It was an old acquaintance of mine.  With only the briefest exchange of greetings he offered me some vegetables. I said: SURE, I`ll take some! He then escorted me over to the open trunk (or boot, as the British say) of his car.

Inside were what looked like watermelons- not the round ones, but the large oval shaped ones that we have in the U.S. “Out of season”, I thought, but still looked forward to eating one of my favorite fruits.

I was mistaken, however, in my identification . My acquaintance explained `I have some to-gan (冬瓜) from my garden”,  Then he urged me to take one.

Hearing the word to-gan, I immediately remembered the unique TABANKA MATSURI festival held each September in Shimotsuma City (which touches Tsukuba City in its north-west corner). At that curious event, bonfires are lit and the ground is struck with tatami mats. Youths in costume jump over the bon-fire. Inside the shrine itself though, boiled wax-gourd is presented as an offering to Hachiman, the God of the Shrine.

Recalling this and some pictures I had taken, I went against my better judgement and agreed to take one of the large gourds. Too big to fit in my backpack, I had to carry it around awkwardly all day till I got home- and then, I still  had no idea what I would do with it !

It goes without saying that it was not an easy day- and I am still paying the price with the pain in my lower back.

But the experience did teach me a lot about to-gan (pronounced TOH gan). 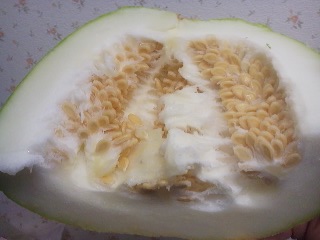 And after it has been sliced into quarters

The main thing I learned from talking with dozens of farmers, both professional and amateur, was that to-gan grew quickly and in abundance- often popping up in fields where they hadn`t been planted. When young and small, they are covered with a fuzz, though when matured this turns to a waxy film- which explains the English name: wax gourd. They are ready for harvesting in September- which is the reason why they must have become the traditional offering at that September festival in Shimotsuma which I mentioned above.

I also learned from talking to Japanese friends and acquaintances that most people would NOT have accepted a gift of to-gan- one, because they did not like it very much, and two, because even if they did, each gourd would be too big for one family to use up. Apparently they go bad soon after cutting- though they do  keep a long time when left uncut ! In fact, the Chinese characters used to write the word to-gan 冬瓜 mean WINTER MELON, because even though they are harvested in September they can be stored and eaten throughout the winter. 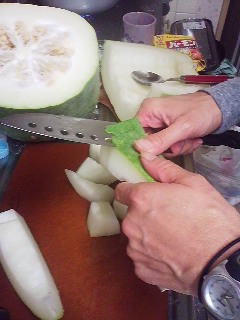 More about to-gan (冬瓜)- or as they are called in English: wax gourd or winter melon

A few hours at the library helped me learn more about to-gan: probably much more than you`d like to know. So let me tell you the juiciest bits.

The first is that wax gourds are in fact juicy- or at least watery! Though they do not drip when you cut into them (as does a water melon or a peach) they are comprised of almost only water- 95% to be exact.

Despite being mostly H2O, they are good sources of potassium and vitamins C, B1, B2. B3 and zinc.

Specialists believe that the wax gourd plant, which is a vine, originated on the Indian subcontinent where it is still used to make candy (petha), curries, and traditional medicines.

From there, the plant spread eastward through South-East Asia (including the Philippines) and China (records of this plant exist from as far back as the 3rd century) where it is still used, mostly in soups, stir-fries and sweets (as well as in traditional medicines).

If you go to a Thai grocery in Japan you will even be able to find cans of  juice made from wax gourd. It is called winter melon juice. 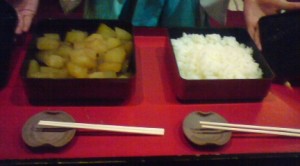 Boiled To-gan (wax gourd) and rice are presented to the God of the Taiho Hachiman Shrine in Shimotsuma on the days of its Tabanka Festival each year in September.

To-gan has been grown in Japan since at least the Heian Period (794-1185). In the present day, 90 percent of Japanese wax gourds are produced in just five prefectures: Okinawa, Aichi, Kagoshima, Okayama, and Kanagawa. Over the centuries, many recipes have been devised for its use in Japanese cuisine.

In cookbooks and online I was able to find dozens of recipes.

The simplest of these involves adding wax gourd to your miso soup. But since I had found out that this plant had its origins in India, I decided that I would use my gift wax gourd as part of a curry dinner.

We cut gourd in half and then in quarters, removed the seeds, and then cut away away the skin. After slicing the white flesh into bite-sized pieces, we added them to a curry made from an instant curry package. 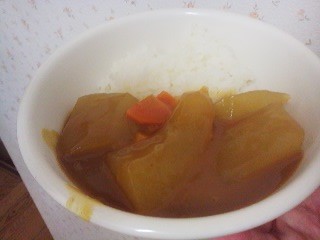 The taste of the wax gourds flesh is very delicate- in fact it has very little taste of its own! It will take on the flavors of the soups, sauces or seasonings that you cook it with.

The texture is similar (in my mind) to that of daikon radish ( without the strong smell and taste).

It went really well the curry, and the next morning just as fittingly with the miso soup. 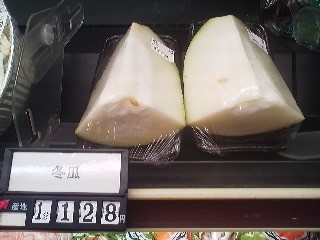 Cut wax gourds on sale at a supermarket in Tsukuba.

After wax gourd for breakfast and the curry of the previous evening, it was a strange coincidence that at about 11 of that morning another old acquaintance, an avid hobby farmer, brought me a gift- two wax gourds ! Though this time they were in a large plastic bag in which I could carry them! 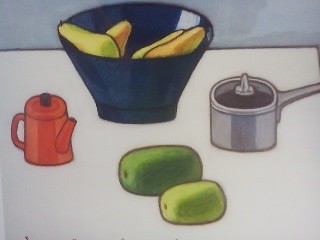 I found this recipe taped onto a wax gourd being sold at the WAKU WAKU HIROBA produce store at the Lala Garden Shopping Center.

Here is a translation of the text, which I assume was written by the farmer who brought them to market.

A recipe for wax gourds (TO-GAN)

Ingredients (for a serving of 4)

The green (top) portion of a leek (negi)

Half a ginger root

Half a Tsp salt

Peel the wax gourd, remove the seeds and fibers.

After softening in water, remove the stems from the mushrooms. Cut the large mushroom heads in half (use smaller ones whole)

Chop up the leeks

Slice the ginger into thin slices

In a pot put the chicken, shiitake, leeks and ginger. Add the water and heat.

Scoop off any scum that rises to the top.

Add the sake (rice wine) and the salt. Cover the pot

After 10 minutes, lower the heat and put in the wax gourd

Keep removing any scum that rises to the top

Boil until wax gourd is tender (about 20 minutes)

Remove the ginger and the leeks

The soup is ready to be served!