Despite the Cold and Cloudy July, Tsukuba’s 2020 Rice Harvest Gets a Thumbs Up! 8 September, 2020 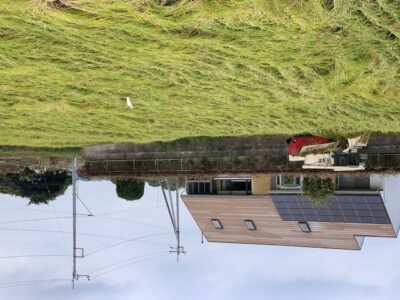 An egret (the white bird neat the center) waits for the rice to be reaped in Furuku, Tsukuba (2020) – so it can get to any insects and frogs that might be left exposed when the field has been cleared. 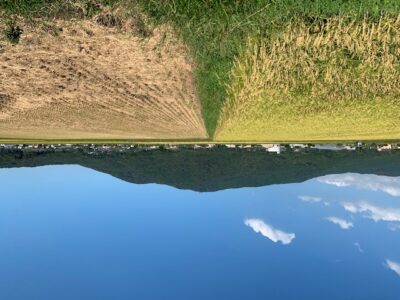 Two fields, one harvested and one soon to be. You can see Mt. Ho-kyo-zan in the background – once covered with large, thriving temples and with a castle (Oda Castle) at its base. September 9, 2020) 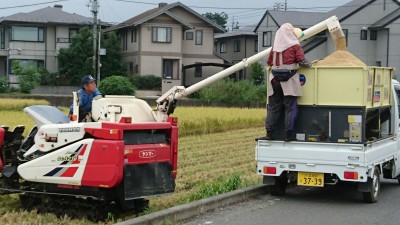 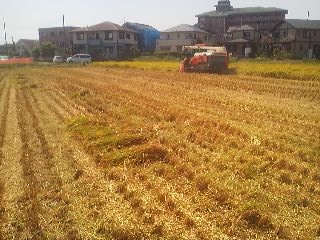 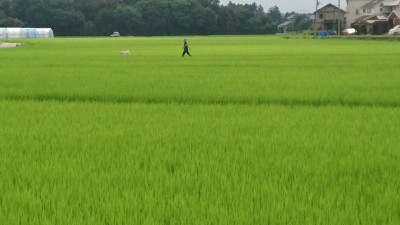 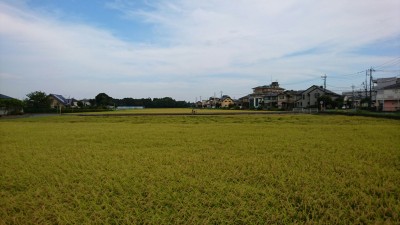 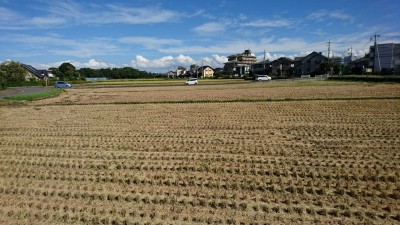 .. and September! – from the same spot in Matsushiro, Tsukuba (just behind the Lala Garden Shopping Center) 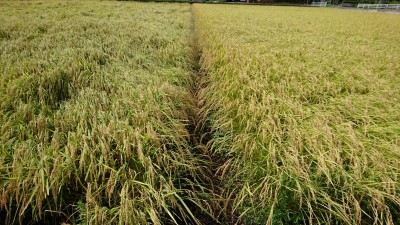 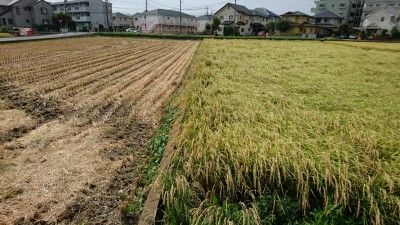 One field cut – and the other waiting… heavy-laden with grain

Droughts, typhoons, insects, disease, demanding landlords, high taxes, you name it. Over the centuries, Japanese farmers have had a lot of reasons to wear sour faces and gripe. This year continuous cold and cloudy conditions in July had many people worrying that this year’s harvest might be as bad as the one back in the wake of the 1991 Mt. Pinatubo eruption in the Philippines- and all the volcanic ash it spewed in the air filtering out the sunlight.

Unlike that year of failed rice crops on a national scale, there will be no need in 2020-21 to import rice from the U.S. or Thailand- as the August weather in the eastern part of Japan, where Tsukuba happens to be located, has been very conducive to the robust growth of paddy. 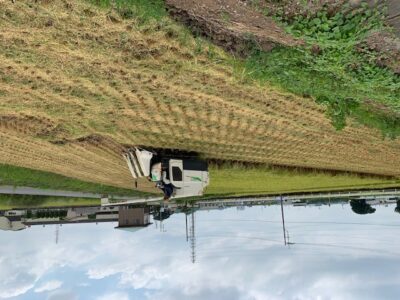 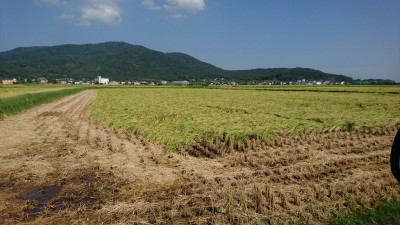 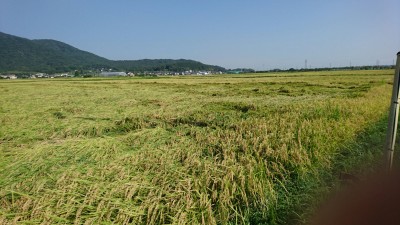 Rice knocked over by wind and rain (Oda, Tsukuba)

This week, as I walked through the various rice belt areas in Tsukuba (usually along the small rivers),instead of frowns it was mostly smiles, as I greeted the farmers – though the mood did feel  a bit restrained, perhaps out of respect to the hardships their counterparts in disaster (typhoon) stricken areas, or the state of the world in general. Anyway though, the unanimous response to my queries about this year’s harvest was: Thumbs up! 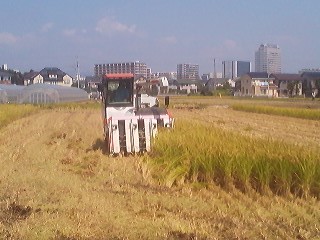 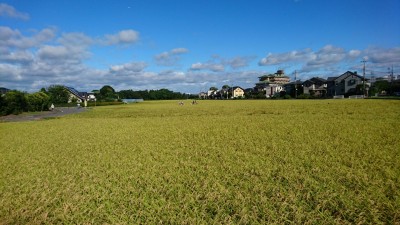 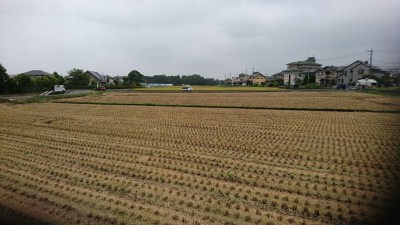 From the same spot

Many of us in Tsukuba live or work near rice fields and are thus able to follow, day by day the complete cycle of rice production. From tilling in late April, flooding the fields and transplanting of seedlings in May, then through summer’s wavy deep green sea of rice, it all builds up to this week’s heavy-headed, slouching rice stalks which seem to be begging for a reaping. After enjoying following all this everyday for so long, I felt a little sad to see the fields which this week have already been left all cropped and bare from harvest. 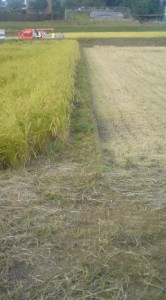 In generations past, the harvesting process required backbreaking effort. These days you can watch a whole field being reaped, separated and then the grain itself being poured into containers, all in about 20 minutes. Most Tsukuba farmers have had their own reaping vehicles, bought with loans, which can be used to make life easy, for decades.

About 85 percent of the rice in this area is the KOSHIHIKARI variety which was developed in Fukui Prefecture about 50 years ago and has since spread throughout the country and is now the most popular rice for regular consumption. The remaining rice grown in Tsukuba is Nippon Barre, a type of MOCHI GOME, or sticky rice, which is especially used to make pounded rice cakes (o-mochi). When I asked, none of the farmers (even the very old) could recall which variety was used before the arrival of KOSHIHIKARI. 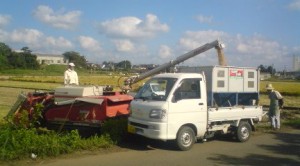 When shopping for rice, another local option to consider is the famous HOJO-MAI (北条米), which is grown in the sandy soil (most of Tsukuba is Kanto loam volcanic soil) at the foot of Mt. Tsukuba and irrigated with the spring waters which gush out of the mountain (or so the story goes). This rice has historically been offered to the Emperor and some people think it is especially tasty (while others disagree). This rice is about 20% more expensive than the usual KOSHIHIKARI. 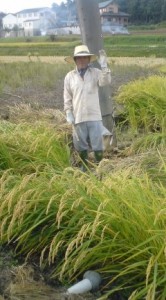 Of course many traditional ceremonies have been held this year with the aim of bringing about good harvest. Probably more important in achieving this end was this summer’s ideal rice growing weather. The farmers told me there was plenty of rain (more than enough I would say!), as well as sufficiently hot weather. Another major factor was that there were no typhoons.

These conditions, combined with all the chemical fertilizers and pesticides which are so liberally applied (actually turning these historically rich ecosystems into what are veritable DESERTS OF DEEP GREEN), make for yields which were unimaginable in the Edo Period (1600-1867). In those days, the standard yield for a HO-SAKU (bumper crop) was ITTAN YON KOKU (一反四石), which would mean that a rice field the size of a tennis court (including out of bound areas) would produce enough rice for four men to live on for one year. Yields today are many times that.

If you feel uneasy about the chemicals used in growing Tsukuba’s rice(which you probably should since the farmers eat separately-grown more organic stuff) you can always by yuki mai (organic rice) or even better, befriend a farmer and hope to get a little hand-out from his or her private stash of chemical free rice. 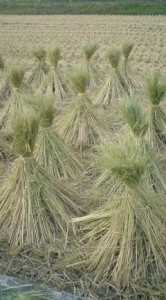 As only older, full-time farmers have been able to harvest during the week, you will be able to watch the harvest (in fields cultivated by weekend, company employee farmers) through the long weekend. The little pyramids you see in the freshly harvested fields are the separated straw set out to dry for use as matting in the fields to prevent insect infestation.

Beware though, as some people have an allergic reaction to the materials thrown into the air during the reaping process. 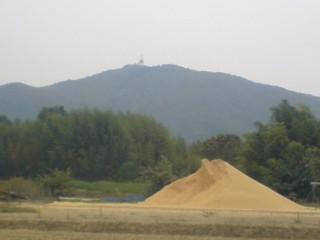 Typical sight in the Japanese countryside in autumn- a pile of freshly removed rice husks. in the background you can see Mt. Hokyo-zan in Oda, Tsukuba

i HAVE WRITTEN ANOTHER PIECE ON HOW THE RICE HARVETING CREATES ONE OF THE TWO MOST DRAMATIC ANNUAL CHANGES IN TSUKUBA`S LANDSCAPE: 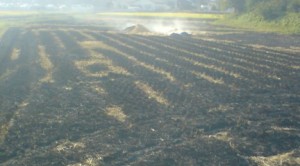 Many farmers burn their fields after the harvest- to kill insects and cover the soil with nutritious ash. This can make September a smokey month in Japan!