Scribblings on the Occassion of Shiki-Ki （子規忌）, the Memorial Day for Poet and Man of Letters- Masaoka Shiki (and introducing Watanabe Ko-boku, 渡邉香墨 ) 19 September, 2020 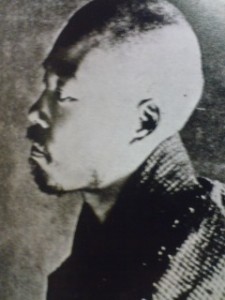 During the decades of feverish Westernization and modernization which followed the Meiji Restoration of 1868, there were many who believed that the traditional form of Japanese poetry  then called the HOKKU, but now known as the HAIKU, would disappear as a LIVING ART FORM. How wrong those people were. Not only does HAIKU-making (let alone the enjoyment of reading existing poems) still thrive in Japan, but it has become one the THINGS JAPANESE which have gone international in a big way, with people discussing, writing and publishing  them in numerous countries  (and languages) around the globe.

What makes a HAIKU a HAIKU ? Well, besides consisting of only 17 syllables broken up into 3 phrases of five, seven and five syllables each, the poem should also contain a season-indicating keyword called a KIGO. Though these are often connected to natural phenomena such as- cherry blossoms (spring), cicadas (summer), the moon (autumn), and frost (winter), these keywords can also be foods, customs, or events which have come to be associated with certain times of the year- spinach(spring), ice cream (summer), rice harvest (autumn), Christmas (winter).

I guess it could be said that because it involves a continual, day to day consciousness of season and an awareness of  how human life and the surrounding environment  are  in constant flux (though working in annual cycles), the HAIKU is the QUINTESSENTIAL JAPANESE ART FORM and getting involved in it can be one of the best ways of  becoming deeply acquainted with this country`s  customs, foods, nature, lifestyles, etc.

It is interesting for me that some of Japan`s great poets, those who have so skillfully and sublimely used KIGO to evoke various facts and feelings connected to certain times of the year, HAVE BECOME KIGO THEMSELVES, with their memorial days (anniversary of death) being used as seasonal indicators. This is done by putting the character KI (忌) after the poets name. Last year I was thinking of writing an article about the SHIKI-KI (子規忌), the memorial day for Masaoka Shiki (1867-1902), which is September 19th, but somehow I never got around around to it. I said to myself that I would HAVE TO write something about this man on his next memorial day. Why? Well, it is not only because he is considered one of the FOUR GIANTS OF THE HAIKU (along with BASHO, BUSON, and ISSA) or that he could be said to be the man who saved the haiku from decline and possible obscurity( it is he who, in fact, popularized the term HAIKU, itself).

I feel a special connection to SHIKI because his writings have had a MAJOR IMPACT on my own life and on the content of this blog. By this I am NOT referring specifically to his poems, but rather  to his essays and other writings which became familiar to me through a book (MASAOKA SHIKI) written by long term Tsukuba resident and Shiki specialist Janine Beichman. It was a passage such as this, starting on the bottom of page 45 of her book, which affected me- Shiki also wrote that the beginning poet should constantly take walks and travel all over, in every season. The subjects of his poems need not be restricted to famous places, however; if one looked about calmly and carefully, subjects could be found everywhere. Even in a little garden, where one could take no more than ten steps, the poet might find a new subject everyday (Janine Beichman).

And though I am no poet, I have taken this  attitude  close to heart, and because of this, over the years, I have developed a deep attachment to the Tsukuba area and its nature.  It is this sense of WONDER  that I have been trying to convey to the readers of Tsukublog. Another thing that makes me feel an affinity with SHIKI is our shared love of BASEBALL. It seems that it was he who gave the sport its Japanese name: YAKYU (野球), literally FIELD BALL, and also created many of the special baseball terms which are used in Japanese today- CHOKYU (直球)- fastball, DASHA (打者)- batter, and SOHSHA (走者)- runner. SHIKI was actually inducted into the Japanese Baseball Hall of Fame in 2002, and often when I am in Ueno Park in Tokyo, I take a break between visits to exhibitions and watch a game at the baseball field there, which is named after the poet. 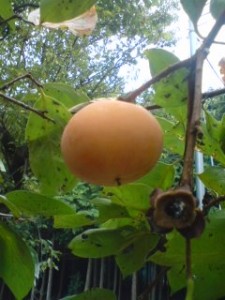 A Kaki (persimmon) in Tsukuba

For the general Japanese public , however, mentioning the name of Masaoka Shiki will bring to mind one (HAIKU) poem in particular (because it is in the standard school curriculum) about eating a persimmon at the venerable old temple HORYU-JI. It goes- KAKI KUEBA KANE GA NARU NARI ( As I CRUNCH into a persimmon at the old Temple, its bell goes DONNGG – my translation).

It is because of this  strong connection between persimmons (KAKI), baseball, and Masaoka Shiki that I was actually was able to jot down these scribblings in time for this year`s SHIKI-KI. You see, being as busy as I am and always having so many things on my mind at any particular time, I had lost track of the fact that Shiki`s memorial day was coming up again( though, I had a subconscious awareness, of course). So it happens that early in the morning today (the 19th), I had an appointment to play STICKBALL, a kind of one on one, New York City version of baseball, and started out of my house , walking towards the  City Office, where we have our field. Turning a corner, I stepped on something which made a CRUNCH. I looked down. Persimmons!  There were more on the branches overhead. The first time I had noticed them this season! With baseball bat in hand and these fruit above and underfoot, I immediately remembered SHIKI ! An excited check of my cell phone calendar confirmed that it WAS in fact the day I had been planning to write about- SHIKI`s memorial day. On the way to my game I thought up this English HAIKU – Off to play baseball, I step on a persimmon- CRUNCH, it’s Shikiki (Shiki’s Memorial Day)! 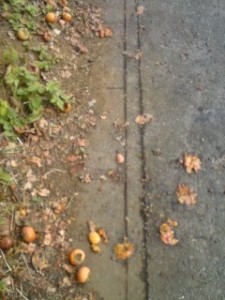 Persimmons on the road

Having read so far, you still might be wondering how exactly Shiki saved the HAIKU. Well, if you want to know more, I defer to fellow Tsukuban Janine Beichman, the person who literally WROTE THE BOOK on Shiki. You can find her MASAOKA SHIKI at the Tsukuba Central library, or order it at a bookstore or online. There is also a book by Columbia University`s  Donald Keene on Shiki entitled The Winter Sun Shines In, which can be read (partially) here. 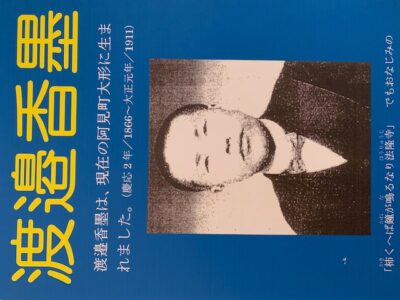 A poster hanging at the Ami Town Community Center. Part of a tiny exhibition introducing the works of locally-born Watanabe Ko-boku (1886-1911*), a judge, who also happened to be an accomplished amateur haiku poet and follower of Masaoka Shiki! Interestingly, instead of quoting one of Ko-boku’s haiku, it gives Shiki’s persimmon poem – and says “this locally-born person was an important disciple of the man who wrote this familiar work.” 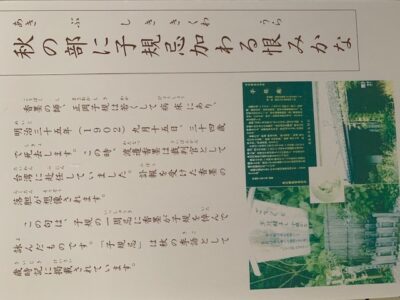 A poem using SHIKIKI as its
seasonal keyword. It reads: AKI NO BU NI, SHIKIKI KUWAWARU, URAMI KA NA. Let me tentatively translate it as: A new autumn key-word – Shiki’s Memorial Day… CURSES! This was written for the first anniversary of Shiki’s death (in 1902) while Ko-boku was working as a magistrate in Taiwan, where he founded and edited a haiku journal 相思樹 (So-shiju) based on Shiki’s ideas – and named after a native tree. 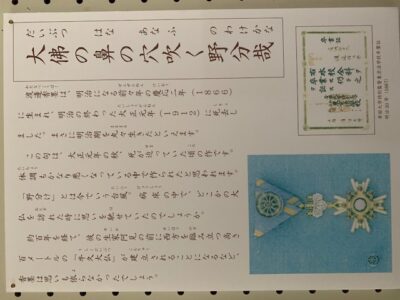 Another poem, this one prophetically mentioning a Great Buddha Statue – decades before an actual one (the tallest in the world!) was built not far from Koboku’s birth-house! Composed just before Koboku’s death, it reads: DAIBUTSU NO, HANA NO ANA FUKU, NO WAKE KA NA – which I roughly translate as: Out of the nose, of the Great Buddha image –  there blows a typhoon! 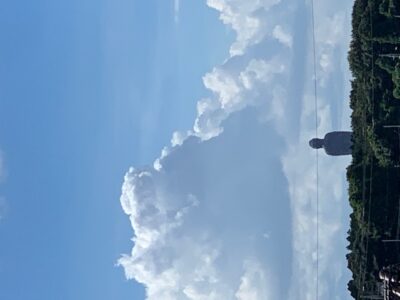 The Ushiku Daibutsu (Great Buddha of Ushiku) as seen from the Ami Community Center. Construction work on it began 74 years after Koboku’s death. 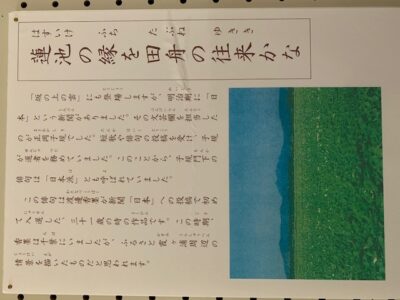 Koboku’s first published work was selected by Shiki, who was then an editor at the newspaper Nippon, in which the poem appeared (when Koboku was 32 years of age). Koboku was living in Chiba Prefecture at the time and must have been homesick for his village on the shores of Lake Kasumigaura. It reads: HASU IKE NO, BUCHI WO TABUNE NO, YUKIKI KA NA – which I render as: By lotus pond edge, small flat-bottomed boats course by, some this way some that…

* Watanbe Sukejiro (渡邉渡邉助治郎), Koboku(香墨) was his pen-name, was born on May 27, 1866 near the shores of Lake Kasumigaura, in Kimihara Village, Inashiki County, Hitachi Province (now O-gata, Ami Town, Ibaraki Prefecture) and died on December 28, 1912 (not 1911 as stated on the poster above). He studied at a local temple-school (Terakoya) and must have excelled at his studies, because he got into and graduated from the Tokyo School of Law (now Hosei University) in 1888 and passed the bar exam.

His first job was as a judge in training in Kofu, Yamanashi Prefecture. At that time he married a 17 year-old Tsuchiura girl, Fudeko, and they subsequently moved around Japan, Morioka (Iwate Prefecture), Toyama and Chiba and Tochigi, where he worked as a magistrate.

He apparently visited Masaoka Shiki when he was 29 years old and from then on became seriously involved in the Haiku world while continuing his work as an ever re-locating judge. While working in Niigata, Ko-boku was given special mention by Shiki as a poet who had made great progress.

In 1900 he was sent to Taiwan (then part of the Japanese Empire) as a prosecutor. There he became the leading figure in Haiku. He founded and edited a Haiku Journal, So-shiju, affiliated with Shiki’s Hototogisu, and actively promoted Shiki’s style of poetry. Every year he sent Shiki some Bananas – and the famous poet included this work in one of his thank-you letters: 相別れてバナナ熟する事三度 (soon to be translated).

While in Taiwan, Koboku contracted a form of dysentery. Still he continued writing haiku with several works directly referring to his home area. In 1906, he returned to Japan and was welcomed back by Shiki’s greatest disciples. He then took a leave of absence from government service and opened a law firm in Tsuchiura. He continued writing and had dozens of his works printed in Hototogisu.

Then at the age of 43 he was called back to the Ministry of justice and was sent to the Korean Peninsula to work as a prosecutor. While he was there hw was visited by none other than Takahama Kyoshi, the poet, novelist and editor of Hototogisu.

Whatever bug it was he had caught in Taiwan, though, came back, and he had to come back to Tsuchiura to convalesce. Takahama Kyoshi paid him a sick call and left a poem about it in his diary.

Koboku passed away December 18 1912. He was 47 years old. His grave can be found at the Jinryu-ji temple in Tsuchiura.