Put on Your Gloves and Get Out Your Chopsticks – or shovel! There are GINGKO NUTS (銀杏) on the ground to be gathered! 28 September, 2020 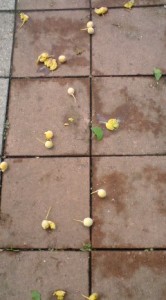 It is well known that smells have the power to unleash long dormant memories. As I was walking along a path between Tsukuba University`s Medical School and the Oikoshi Dorm complex, I came upon a scent which took me back to the time when I was about 4 or 5 years old, and would be taken to kindergarten in a car pool, by a different mother each day. I remembered how I never liked getting into my little friend Michael Slokowsky’s mother’s car. That was because either Michael, or his little brother, had at some point thrown up in the back seat. And though all the vomit had long been cleaned up, no matter how vigorously the Slokowskys scrubbed, or how much air-freshener they sprayed, they just couldn’t get rid of that smell, which not continuously, but occasionally and consistently would jolt my budding young olfactory glands.

This memory-evoking (for me) aroma (of vomit) could only mean one thing on a warm autumn day in Tsukuba: the gingko nuts were falling down and being crushed by cars, bicycles and pedestrians! Sure enough I checked the sidewalk, and it was true! A little earlier than I would have had expected. 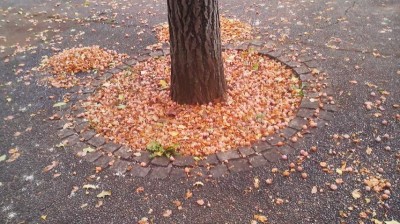 In downtown Tsukuba, both sides of the Gakuen road are lined with gingko trees (itcho-, イチョウ) for a couple of kilometers, and the female trees usually drop prodigious amounts of their smelly, but healthy and delicious, nuts on the road and sidewalk. As you can imagine, early-bird gingko nut (ginnan) lovers are out first thing in the morning trying to gather up their fill of this expensive (if store bought) seasonal delicacy. Plenty of gingko tree also grow in Tsukuba`s parks, temples and campuses. 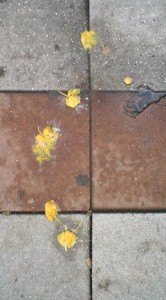 For this task they need to bring the necessary equipment, which means at least a pair of plastic gloves and a plastic bag, but often includes a pair of long chopsticks. When I first saw this, I thought that it was just that these people didn’t want to get their hands all stinky. It turns out, though, that touching the fruit which contains the nut can cause terrible skin rashes which take a long time to go away.

Many locals, especially the elderly, like to have two or three nuts a day (more than that is said to be bad for you) as they believe it is good for the heart. Some believe that it acts as an aphrodisiac. In Western countries the extract (in pill form) has become popular at health food stores (though the trees and fresh nuts are not common due to the unusual odor and mess they create).

If you would like to gather and prepare some gingko nuts yourself (and well you should!) here is how to go about it. Go to the Gakuen road, or even better (or safer) to Doho Park, at the western entrance, and put as many of the fruit as you can in a plastic bag. When you take this home, dump them into a bucket of water and wash them, removing the nuts from the fruit (don’t forget that you need plastic or rubber gloves). 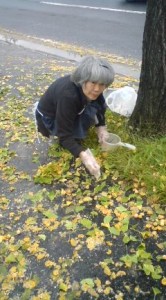 A woman gathering gingko nuts along the Tsuchiura-Gakuen Road

The simplest thing to do next is to put the dried nuts in a paper envelope and microwave them for about 90 seconds. You might want to sprinkle them with some salt first.

Mika Kido, a gingko nut enthusiast who lives in Azuma, the heart of the nut gathering scene, recommended that I buy a traditional roasting pan called a ho-roku, which look like this.

Remember no matter how much you like them,  eat only a few per day.

Also, if you get around by bicycle, take extra care as the fruits littering the sidewalk can be dangerously slippery. 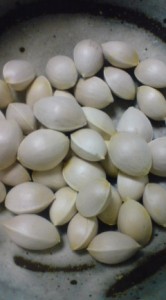 Gingko nuts I got from Mayumi Yasuoka

Yesterday I was lucky enough to have received a gift of a few dozen freshly gathered and cleansed gingko nuts from Mayumi Yasuoka. Mayumi-San is a third generation Edo-ko ( Tokyo-ite) and is a true city girl. Still she (and her mother I am told) always tries to stay conscious of the changing seasons by enjoying traditionally representative seasonal foods, many of which she gathers herself.

Mayumi-San used gloves to pick up the fallen nuts and then buried them in sand. She then scrubbed them with scouring soap. The results were presented to me looking like large pistachios ( in a beautiful envelope she had made herself- remember it is not only taste but presentation that is important!).

After zapping them in the microwave, I sat enjoying them, noticing how many different shades of green the edible part of the nuts can be.

Mayumi insists that you can eat as many gingko nuts as you like ( and maybe that is why she is always so energetic), but still I controlled myself and had only a few. And then a few more! 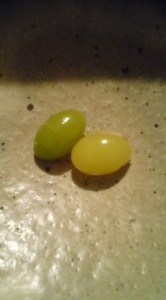