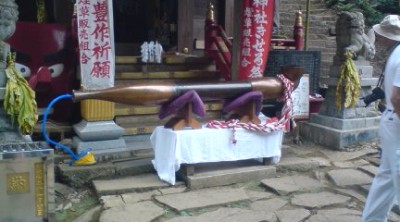 Japan`s largest KISERU ( traditional pipe- of South-East Asian origin) is filled with tobacco, lit,  carried while still billowing smoke, up Mt. Kaba to the Tobacco Shrine- notice the pump inserted into the mouth-piece which helps keep the tobacco lit ! 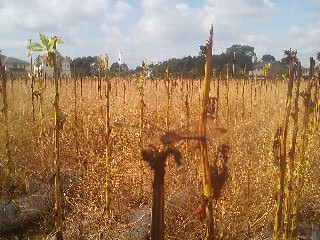 While it is already September and ostensibly Autumn, down here on the heavily deforested and extensively paved, concrete and steel expanses of the Kanto Plain, it is still hot and  steamy (though today happens to be nice and cool!). That makes  a trip to see the KISERU MATSURI (きせる祭), a unique ceremony carried out as a prayer for abundant tobacco crops, even more attractive. For not only is it a chance to watch and PARTICIPATE in the unusual and highly picturesque ritual proceedings which are part of the festival, but the site of the shrine itself, atop the deeply forested Mt. Kaba, provides a shady and welcome refuge high above these sweltering lowlands ( though the mountain at its loftiest point is only 709 meters high!). 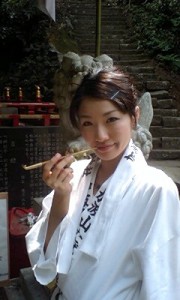 Every year on September fifth, a huge KISERU ( traditional Japanese pipe), said to be the largest in Japan, is set out in front of the Mt Kaba Shrine ( Kabasan Jinja), filled with tobacco, and then lit. The finely cut leaves are then kept burning with the help of a pump which is attached to the mouth-piece.

Before the pipe is lit, about ten Parishioners ( UJIKO) enter the shrine for some purification rites and prayers before the ceremony gets underway. There are of course, also some visitors present ( about 30 in recent years), mostly armed with cameras, who negotiate the extremely narrow and poorly paved road to get to beautifully rustic shrine. Those who have made the hair-raising  journey wait out in front of the shrine brimming with anticipation while the preliminary prayers are taking place inside. 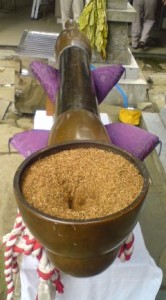 The bowl of the giant kiseru filled with tobacco

When the prayers in the shrine are finished, one of the priests then starts to get a fire going using the same traditional tool I have seen used at the Kattate Festival ( which is held not very far from the Mt. Kaba Shrine), and I`ve seen the priest at Mt Kaba have the same trouble getting the fire started  as the priest at the other festival often does. In fact, he almost lost his cool last year, and the other priests tried to calm him down, urging him to go slow and easy.

They continued to give him the same advice as he tried to use the flame he had finally got going to light the tobacco in the KISERU – something which proved to be just as a difficult a task.

Quite comically ( and ironically) the heavy smoke which started to billow out of the freshly lit pipe had everyone, especially the priest coughing uncontrollably. An ironic reminder of the health problems associated with the crop that the farmers  come to this shrine to pray for. 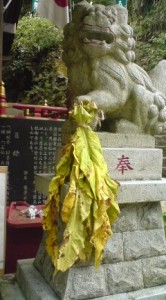 You had better be on your toes at this point, because suddenly those waiting out in front of the shrine come under a barrage of rice cakes ( Omochi) and other snacks! Those who are familiar with the festival and no what is going to happen always come equipped with bags in which to store all the booty they can pick up. You DO have to be careful, though, because getting hit in the face or head with a piece of flying omochi is not much fun at all ! 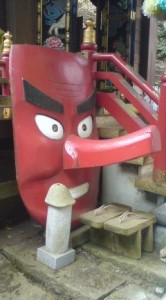 Even before the excitement has died down, the parishioners commence with the main rituals of the matsuri- they actually lift the KISERU up, bear it on their shoulders, and walk around in a circle three times. They are accompanied by some others who carry TABAKO BONTEN, sticks adorned with tobacco leaves and sacred strips of paper. While this is going on, conch shells (hora-gai) are blown for purification of the area. 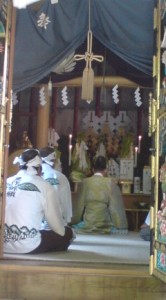 The rites begin with prayers for good harvest inside the Shrine. Only male parishioners ( UJIKO) take part in this ceremony.

Then suddenly, without notice, the bearers start to carry the huge smoking pipe up an impossibly treacherous path which leads further up the mountain to the Tobacco Shrine ( TABAKO JINJA), a small structure used only for this festival. 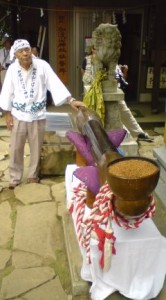 One of the parishioners explaining the proceedings to visitors

At this point in the festival you can see how the KISERU MATSURI is a variation of the much older Kattate Matsuri held not very far away (on August 31st each year). In that festival, a typical fire festival, torches are lit with a sacred flame and then carried up the mountain to a smaller shrine as an offering. At the Mt. Kaba event, the same thing actually occurs, but instead of many torches, the sacred fire is carried on one huge pipe!

When  the pipe is finally brought to its destination ( in about 15 minutes), it is set down once again in front of a much smaller ( TABAKO) shrine. The bearers and priests are often set off into coughing fits once again at this point and it might take them a while to regain their composure. 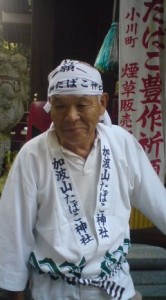 The priest then recites some prayers (NORITO) and then each of the UJIKO makes offerings of sacred SAKAKI leaves.

Sake ( rice wine) is then offered all around ( my favorite part of the event!). 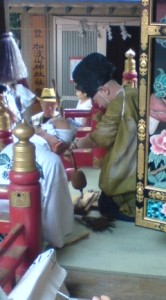 Getting a flame started ( with much difficulty!), using a traditional wooden tool

The KISERU is then picked up again, and carried back down the mountain. 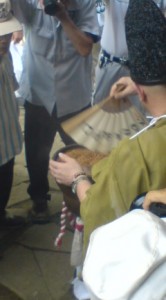 Trying to get the giant pipe lit

The sake, makes the walk down a bit more treacherous than it had been coming up. 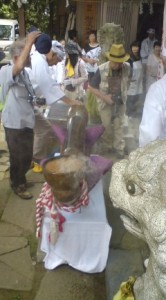 Successfully lit and smoking with the aid of the pump

But everyone is by now in such a good mood that  its like we are all old friends. 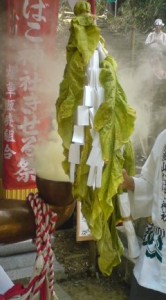 TABAKO BONTEN – tobacco leaves and strips of sacred paper hanging from a stick, are taken up by the parishioners 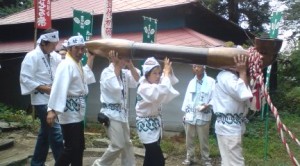 The Kiseru itself is then taken up and carried around in a circle 3 times, along with the tabako bonten 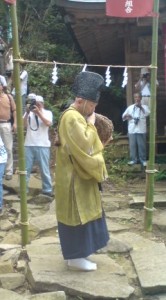 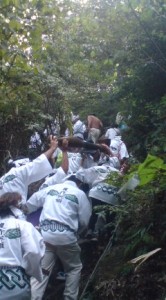 Bearing the huge (and lit!) KISERU up the treacherously steep slope 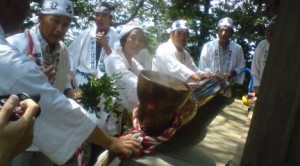 Taking a break along the way 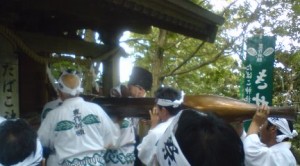 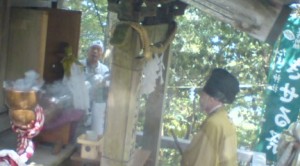 Completing the ceremony with prayers and offerings ( and plenty of coughing from the smoke!)

On the way to or from the shrine, along the ridge which runs across the mountain range, you will probably run into groups of hang-gliders and paragliders. Its fun to watch them take off. 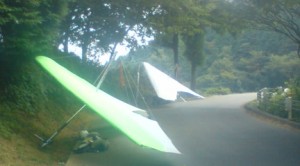 On the way back, we ran into some hang-gliding enthusiasts along the road. and stopped to watch them take off 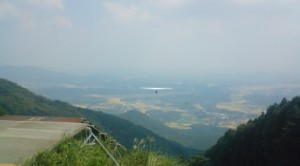 There he goes…. off into the distance

And if you`d like to know more about WHY there is a ceremony for tobacco crops held at Mt. Kaba read my article about the History of Tobacco in Ibaraki and Japan. 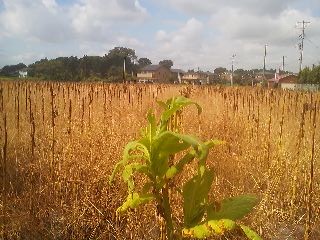