HIGANBANA – 彼岸花 ( SPIDER LILIES) are AMAZING Flowers- but never give them as gifts in Japan! 26 September, 2020 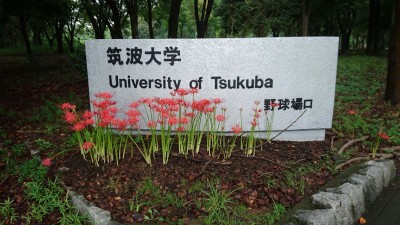 Beautiful for some – but creepy for those familiar with their traditional significance – Higanbana blooming in front of one of the entrances to Tsukuba U. 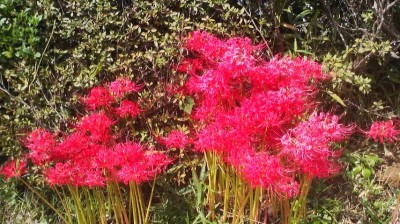 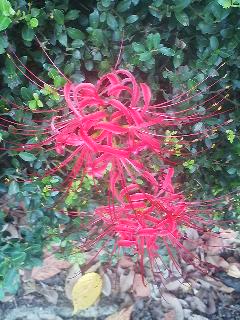 HIGAN-BANA along the Tsuchiura-Gakuen Road, less than a kilometer from the TX Tsukuba Terminal (September)

Whether observed from way up close or from afar, red spider lilies (HIGANBANA) are amazing looking flowers. When seen from a distance, these members of the amaryllis family which often grow in clusters, can seem like a bright red fog hovering mysteriously above the ground – especially when a breeze is blowing. As you approach you realize what it is about them that gives them this special look- large elaborate flowers consisting of long slender upward curling  petals sit perched atop thick green stem: without any leaves! These appear only after the flowers have fallen away! 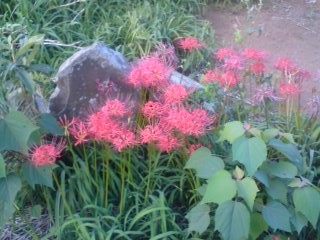 Since these are some of the most curious (and beautiful) flowers that can seen in Japan ( or anywhere else, for that matter), you would assume that they would be popular in arrangements, in gardens, or as gift bouquets. But the fact is, that in Japan it is NOT appropriate to give these flowers as gifts, nor will you commonly see them growing in the gardens of private homes ( though you will find them growing AROUND the outer edges of some peoples` properties)- in fact, when asked, many Japanese people will say that these flowers give them the creeps! Why? Well the main reason is NOT because they are poisonous – which they, in fact, are – but rather because of the TIME at which they bloom. 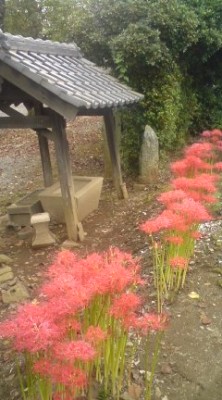 No matter what the weather is like in a particular year, these flowers are uncannily consistent in when they into bloom- just around the week of the autumnal equinox in late September.

Now it so happens that traditionally the Japanese have called the weeks of the equinox days O-HIGAN, and it has been believed that during this time, when the sun sets almost perfectly due west ( the direction in which the Buddhist Paradise lies) contact can be made with the spirits of departed family members. It is common to this day for people to visit ones family graves at these times, clean up, and make offerings of flowers, incense, etc. 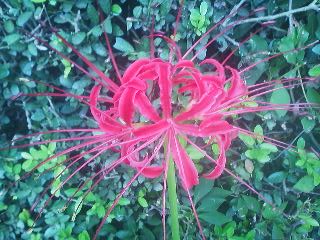 September 20 – near Tsukuba Center. With the chirping of the autumn insects, the coolness in the air, the sight of a HIGAN BANA reminds us that its the season of the autumnal equinox 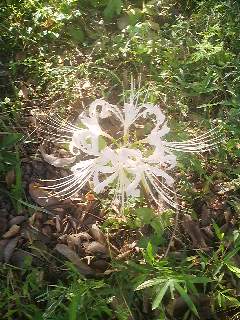 Because the spider lilies bloom every year exactly at the time of the autumn O-Higan, these flowers came to be closely associated with graves, graveyards, Buddhist temples AND the dead.

That is why, one of the places you will most commonly see them is at temples and at cemeteries.

It is this connection which makes these flowers inappropriate for arrangements, as gifts, or as flowers to enjoy near ones home.

It is also this connection with O-Higan which gives these flowers their standard name- HIGANBANA (higan flowers). And though another popular name for them is MANJUSHAGE which is Sanskrit for red flower- with that language indicating again a connection with Buddhism)- specialists in Japanese dialects have found literally hundreds of local variations of names for this flower. Among these are SHIBITO BANA (flower of the dead), YU-REI BANA (the ghost flower), SUTEGO BANA ( the cast away infant flower), and JIGOKU BANA (hell flower)- which gives you more of an indication as to why thse flowers can be a turn-off to many Japanese. 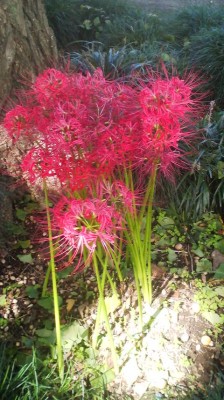 As I have mentioned before, the spider lilies are poisonous. In times of famine ( including the war and immediate post-war years) when there was no other option, people tried to eat their bulbs (since it is apparently possible to wash away the poison in water) and as a result many were sickened or even killed. 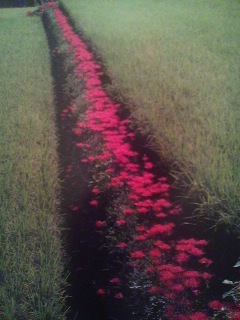 It is because of their killing power, that besides temples and graveyards, you will also be able to see these amazing flowers on the paths between rice fields (AZE MICHI) and on the outer edges of private property. They are planted there to keep out mice and moles- and bad luck, as well. 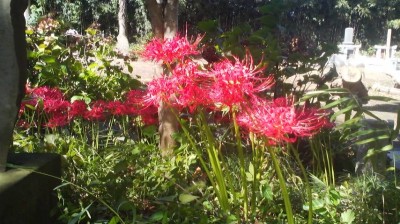 Higanbana (spider lilies) at a temple near Tsukuba 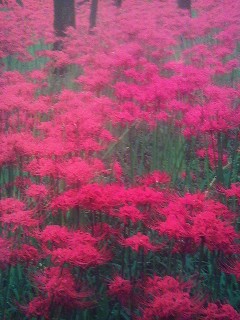