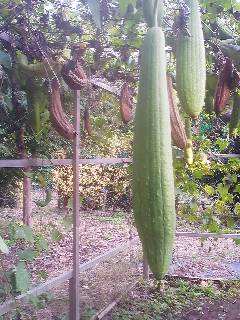 HECHIMA (loofah) grow on vines. In past generations many rural households, especially in southern Japan, grew them on trellises around the family well. This provided a cool, shady place for doing the laundry, washing the dishes – or the baby, or for kids to play in during the steamy summer months.

Many Americans who had been brought up on meat and potatoes got their first tastes of a wider world- I mean beyond those of spaghetti or pizza, at their university food co-ops. These  progressive, student-run health food stores, originally spawned by the 1960`s counter-culture movement, gave  adventurous and politically or health-conscious students a chance to partake of certain dishes they had never heard of before coming to college- miso, tofu, hummus, tabbouleh, tempeh… foods which for many of us have remained a regular part of our diet.

But it was not only food which they had at these food co-ops. One of my strongest memories of being in one, was with my old friend David L.L. Laskin ( who after all these years is now working at a food co-op!) who was waxing lyrical about the qualities of an exotic piece of bath-room paraphernalia- a loofah sponge, which he claimed was the finest sponge there was.

I did not purchase one at the time, but the exotic ring of the name LOOFAH SPONGE stuck with me. Naturally, since the English word for sponge is also the word for a particular SEA CREATURE, I always was certain that these loofah sponges came from the sea.

It was not until years later, while living in Tsukuba, Japan, that I saw a farmer peel away the brown skin from a dried out old gourd and reveal the same type of sponge I had seen years ago in the food co-op that I realized the truth.

Loofah sponges did not come from tropical seas- they grew in the most common vegetable patches.

This was a let-down at first. But the more I learned about the loofah (which the Japanese now call HECHIMA) and about the many ways it has been used over the years in Japan, the more excited I have become about this gourd. Much more excited than I would get over a mere sponge! 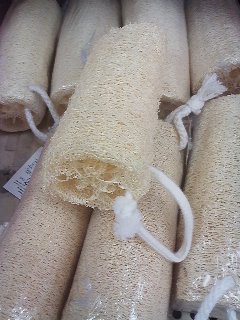 HECHIMA TAWASHI- (loofah sponges) become very soft, flexible and easy on the skin, when soaked in water. The HECHIMA fibers are also tough and these sponges can be used for scrubbing pots and pans- or for lining foot-wear or filling cushions.

In the south of Japan, Kyushu and Okinawa, young HECHIMA are eaten in a variety of ways (as they are in China, India, Sri Lanka, Vietnam and The Philippines). When cooking with them, the important point is to get them while they are just right- before they get too tough and fibrous.

The baby HECHIMA( ready to eat during the hottest time of year) were fried with miso, put into miso soup, or eaten together with somen noodles ( a popular summer dish). It could also be made into a soup in southern Japan where the HECHIMA remains an important vegetable. 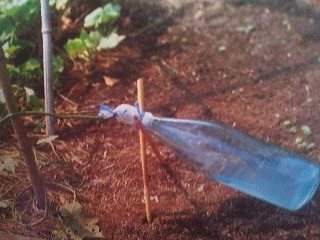 Extracting the fluid from the looffah. This liquid has traditionally been used in Japan as a skin lotion called HECHIMA SUI (loofah water) or to reduce phlegm build-up and coughing. Interestingly, the best time to collect the fluid is the night of September`s full moon.

While it has been a popular food down in the steamier south of the archipelago, there has been no custom of eating it here in the Kanto area (around Tokyo- and including Tsukuba)- though a perusal through an Edo Period cookbook did reveal a recipe for HECHIMA pickles to be made use of in times of famine!

Outside of southern Kyushu and Okinawa, the HECHIMA has been prized as a sponge long before synthetic fibers were developed.

This soft, flexible, yet very hardy material was used not only as a bathroom and kitchen sponge, but also to make cushions ( the fibers can be washed time and again without being damaged) and line foot-wear – hechima-lined ZORI sandals were all the rage in the Edo Period. The hechima was not only comfortable for the feet, but supposedly had an odor-killing effect, as well. 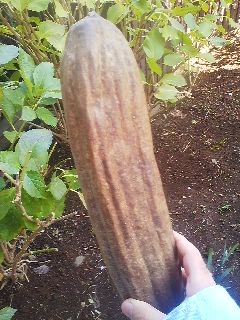 Breaking away the skin of a dried out old loofah gourd reveals the sponge. And I had always thought luffa sponges came from the sea! 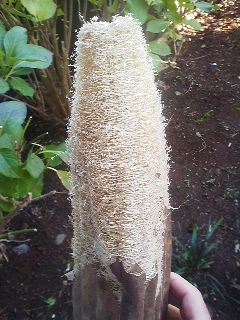 The fluid which builds up in the HECHIMA gourd has also played an important role in Japanese culture- as a medicine- to help break up phlegm and suppress coughing, and more famously as HECHIMA SUI (loofah water)-  which is believed the make the skin beautiful.

The custom of using loofah water as a lotion was introduced to Japan from China sometime during the Muromachi Period (1337-1573). Over the generations, it has been variously been called BIJIN SUI (美人水)- Beauty Water, HANA NO TSUYU (花の露)- Flower Dew, EDO NO MIZU (江戸の水)- The Water of Edo, and KIREI SUI (キレー水)- Pretty Water.

I cannot guarantee that loofah water is in fact good for your skin or for your cough, but I can tell you that it does contain 11 types of saponin which supposedly help keep the skin healthy, as well as amino acids and potassium. The Chinese have used it as a medicine for centuries and Japanese drug-stores still sell HECHIMA SUI as a beauty product. 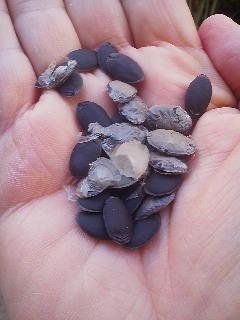 Looffah seeds. If you plant them in planters in March (in the Kanto Area) and transfer them outside in late April, set up a trellis in May, the vines should flower in July and bear fruit soon after that. You should be able to take the LOUFAH WATER (HECHIMA SUI) in September and make sponges between September and October.

But the Japanese, in their ability to find as many uses as possible for a particular item have found many more ways of benefitting from the fiber of the loofah gourds: in fact at the great Paris Exhibitions held in the late 19th Century, momentous events at which such achievements as the Eiffel Tower and the electric light-bulb were first unveiled- the Japanese contingent (from Shizuoka Prefecture) presented their myriad uses of the HECHIMA- drawing thongs of visitors to the Japanese Pavilion with a large luffa sculpture of an elephant!

By far, the most important use of the HECHIMA presented at those early Paris Expos was as oil-filters in engines for ships and trains.

HECHIMA merchants were able to make deals with British ship-building companies, and lucrative contracts were signed for supplying oil-filters.

In total, in the years before WWII Japan exported approximately 10 million loofahs a year as filters, shoe-cushions and sponges- mostly to Britain, France, Germany and the United States. 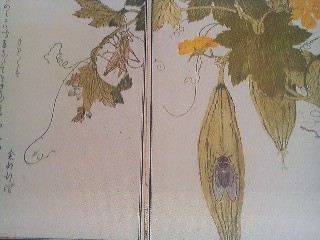 The origin of the name HECHIMA is also of interest to students of the Japanese language and culture. Having been introduced to Japan from China, the loofah came to be called a TOH URI (唐瓜)- meaning a Chinese gourd. This was an intentional distortion of the Japanese reading of the characters which the Chinese use for this plant 糸瓜- ITO URI, which means the string gourd.

Interestingly, even in Okinawa, where along with GO-YA (bitter gourd), the HECHIMA is an everyday summer vegetable, it is called NA-BE-RA (なーべーら)- which means: POT WASHER!

The name HECHIMA came into common usage during the Edo Period when WORD-PLAY was popular among the Edo Towns-folk. The syllable TOH, from the word TOH URI, came between the syllables HEH and CHI in the old IROHA syllabic order (now the Japanese use the AH EE OO order in the same way as English speakers use the ABC order). MA means between.

What I`m trying to say is that HECHIMA means BETWEEN HEH and CHI- which is TOH, as in TOH URI. Get it ?! 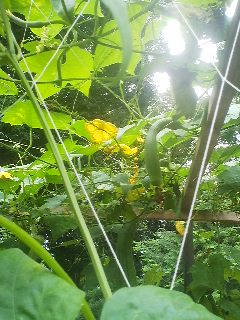 Loofah flowers in Tsukuba in October 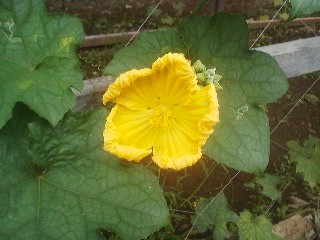 A loofah flower- there are male and female flowers- I think this one is female. 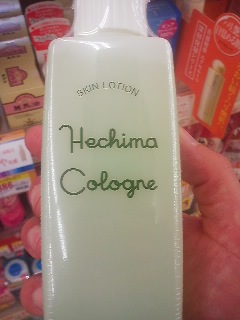 On sale at a local drug-store: skin lotion made from HECHIMA WATER

And finally, for those interested in Japanese poetry, I have to mention the connection between HECHIMA and the man who revived Japanese poetic forms after Japan opened itself up to the world and set out on its project of modernization and westernization- Masaoka Shiki. This man undoubtedly had great charismatic. He had such a tremendous impact on the course of Japanese culture and kept his loyal disciples around him- despite the fact that for most of his active period he was a total wreck, confined to his room, dying  a horrible death from tuberculosis.

On his death bed in 1902, three of Shiki`s final poems used HECHIMA as their key-word.

which I translate respectively as:

A barrelful of sputum- even loofah water can`t do the job!

The loofah flowers bloom- and I`m a goner- all stuffed up with phlegm !