Extinction of the Japanese River Otter (KAWA USO, 川獺) is Now Official- and a local folktale which attests to that animal`s former presence in the Tsukuba Area 23 August, 2020 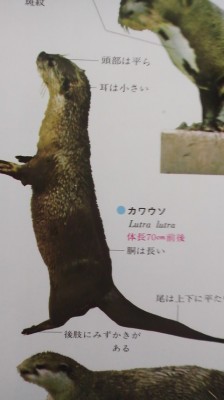 I  was truly surprised when I heard back on August 28th 2012 that the Japanese Ministry of Environment had officially declared the Japanese River Otter extinct. No, it was not the extinction itself that took me aback- there had been no verified sightings of the adorable creature since 1979, and I , along with so many others interested in Japanese fauna, had long resigned ourselves to the worst. It was the fact that after 33 years of putting it off (and wishful thinking- which is always good form in Japan) the government had finally admitted that a mammal which had survived into the Showa Period (1926-1989) had been allowed, under their charge, to disappear from the planet forever ( two species of native wolf had gone extinct in the Meiji Period, 1868-1912). Of course, I wondered- Why all of a sudden?

Naturally, the topic of Japanese sea otters does not crop up in conversation very often. So what really added to my surprise, and actually made my jaw drop when I heard the news, was the fact that a few days earlier, 85 year old Yoshida-San, a resident of Hitana, Tsuchiura ( near Tsukuba), had related an old folktale to me – one which attested to the fact that Japanese River Otters (Lutra lutra nippon) once  thrived in this area – as they did throughout much of Japan (on its main islands) up until the Meiji Restoration of 1868 and Japan`s subsequent Westernization, modernization and industrialization.

So for me, the timing of the announcement was not only puzzling- it was also an amazing coincidence- and I will retell the folktale I was told later on in this post.

As I have just mentioned, the Nihon Kawa uso was long a common presence in Japan`s rivers, streams, lakes and ponds and along its coasts, as well. Even in the great city of Edo ( now Tokyo), which had a population of a million people, there are records of plentiful river otters having lived in its abundant canal and waterways ( Edo had lots of interesting wildlife- seals in Edo Bay, storks on its temple rooftops, and cranes and ibises in the outlying farmland).

It is possible that these playful denizens of Japanese waters were the inspiration for one of Japan`s most popular fictional creatures- the KAPPA, or water sprite. But whether that is true or not, the fact is that the pre-modernized Japanese gave the river otters a certain amount of respect, as living creatures with a spirit or soul. It was only after the onset of modernization, industrialization, and westernization ( which went into high gear in the 1870`s) that these animal came to be seen as mere resources for humans to exploit for profit ( though for many hunters it was merely survival). The changes that took place in Japan at that time spelled doom for the river otters.

Within 100 years they would be extinct.

One characteristic of the Nihon kawa uso which helped to seal its fate was its fine fur. The fact that they live in rivers and ponds meant that not only were their pelts warm, but they were quite water-resistant as well. The skins become valuable commodities when trade with foreign countries was liberalized and extremely popular with Japanese settlers and soldiers who went to live in the cold climes of Manchuria.

River otters were hunted and trapped vigorously with thousands upon thousands taken in the first years of the 20th century.

But it was not only this widespread hunting which the otters had to face- it was large-scale habitat destruction and pollution, as well. River banks were covered in concrete, marshes filled in, while at the same time pesticides and other pollutants killed the various creatures which the otters fed on. Fishing nets and cars also took their toll on the unfortunate animals.

By the end of WWII river otters had virtually disappeared from the islands of Honshu, Hokkaido, and Kyushu. They put up their last stand in remote parts of the island of Shikoku. As I have already mentioned, the last verified river otter sighting in Japan was in 1979 in Susaki, Kochi Prefecture ( the Japanese Prefecture with the highest percentage of forest cover- about 80 percent!)

Since that time there have been many reports of river otter sightings by citizens- almost all of them having turned out to be false leads- though in 1992 researchers confirmed finding some hairs that did in fact come from river otters. Extensive professional surveys, however, have always come up blank in terms of finding any more evidence of river otter presence ( though even after the official extinction announcement of August 28th the Ministry of Environment was flooded with calls by citizens who claim to have seen them – this according to a friend of mine in the ministry!).

There are even some wildlife specialists who still have faith that live Japanese river otters will be found.

As I have said before, there is always a lot of wishful thinking in Japan, and I do hope that these die-hard believers are correct! 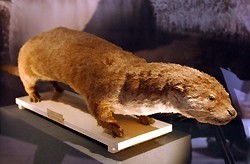 Unfortunately, the Japanese river otter can now only be seen in photos or stuffed and mounted like this ( photo from the Mainichi Newspaper)

Anyway, here is the folk-tale told to me by Yoshida-San, who was born in what is now Tsukuba-City Sasaki, but now lives just over the Tsuchiura City border, in Hitana.

The Beautiful Woman with Sloping Shoulders* by the Riverbank

Long, long ago. a man named Genzo lived in the tiny hamlet of Tsukiji ( in what is now Tsuchiura City). Genzo was a money-lender, specializing in  lending cash to the local farmers who were required, under the terms of their loan-agreements, to return the money in small DAILY installments.

Since the farmers would usually come with their payments after each day’s work, Genzo never really went out after dark, and was unaccustomed to walking outside at night.

One day, however, Genzo had some important business to attend to in the hamlet of Mushikake (also now part of Tsuchiura City). There he met an old acquaintance, and the two of them lost themselves in reminiscences and other topics of conversation. Before they knew it, it was pitch black outside. ” Dark already”, exclaimed Genzo. “I’d better be getting home”!

As so he set out on his way.

Not used to walking in the dark, Genzo thought that the best way to find his way back home would be to walk along the bank of the Nosaiji- River (which flows into the Sakura River).

It was more than a little bit scary to be walking alone at night. There was no one else around… or at least that’s what he thought.

But suddenly he spotted something… a human figure. The person was not walking, but standing there, facing the river.

“Its a woman out here at night all alone”, he muttered to himself in surprise .

Getting closer, he noticed that the woman was, elegantly slender, with fine sloping shoulders.  “A real beauty…” he thought to himself. ” What good fortune fate has brought me! Meeting a beautiful woman standing all by herself at night by the river. I`ve got to get a look at her face!”

Approaching the figure, heart beating with anticipation, almost near enough to get a look when… SPLASH! She disappeared into the river!

“WHOA! What the.. ???” Surprised, Genzo rushed down to the water`s edge and peered down. Nothing. Not even a ripple.

“Now wait a minute. Until a second ago there was a beautiful woman with sloping shoulders standing right here! I`m sure of it!”

Genzo thought what had happened was so strange…  he suspected that perhaps he’d been bewitched by a fox.

When he got home he wanted to tell someone about what had happened, but he hesitated thinking that no one would believe him anyway.

But one day, Genzo finally confessed what had happened to a friend. He described what he had seen, an elegantly slim woman with beautiful sloping shoulders looking out toward the river who had suddenly disappeared into the water with a splash.

Having listened to Genzo`s tale, the friend turned to him and said-” that wasn`t  a woman, it was a river otter!

* Sloping shoulders (nade gata, in Japanese), shoulders which are shaped somewhat like a gentle upside-down Y were traditionally considered beautiful by the Japanese and especially suitable for those wearing kimono. 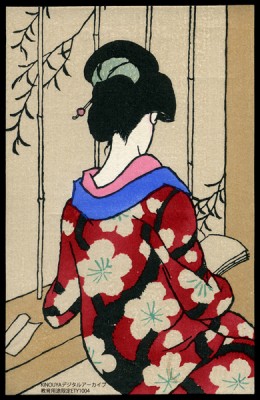 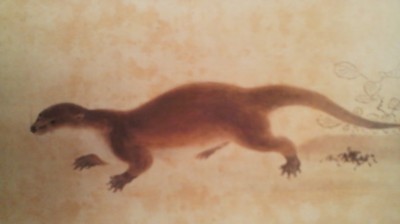