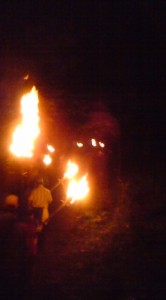 Every year on the 31st of August, the parishioners ( UJIKO) of the Gosho Komagataki Jinja (五所駒滝神社）, the ancient Shrine which watches over and protects the town of Makabe ( now part of Sakuragawa-city), gather before sundown to get ready for what is probably the most atmospheric and beautiful of all the numerous FIRE FESTIVALS which take place in the vicinity of Tsukuba City between mid-August and October- the Kattate Matsuri (かったて祭り).

Among all the FIRE FESTIVALS, this one is also probably the most FUN! That’s because, while these other  events which make ritual use of fire  ( most of which I have already written about in tsukublog) usually involve  DISPLAYS of ritual fires ( goma-taki), fire-works, or unique uses of gun-powder ( the tsunabi events), those who attend the Kattate Matsuri in Makabe ( Sakuragawa-Shi) can actually JOIN IN on the festivities by CARRYING A LARGE FLAMING TORCH up a heavily wooded trail, to the top of a mountain called Gongen-Yama by the locals.

With the torches weighing about 10 kilograms each, this might sound like a daunting challenge, and it surely is not very easily done. However, the hike is not very long, and the top, where sits a shrine dedicated to the deity Sengen ( 浅間), the God of Mt. Fuji, can be reached in less than 30 ( smoky, fiery) minutes.

At the top, the torches are then thrown into one pile, creating a large pyre, an offering to the God given as a prayer for good harvests and protection from strong winds and typhoons.

Sweaty, exhausted, but still exhilarated, everyone who has made it to the top then sits down to eat and drink ( not unlike a cherry blossom party-HANAMI), bathed in the mysterious fire-light. Just then,  fire-works are launched from down the mountain. The bon-fire, fire-works and the dazzling view of the illuminated  Kanto Plain which stretches out into the distance, all make for an unforgettable experience. 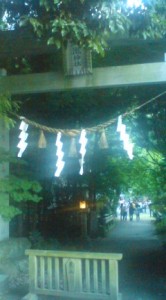 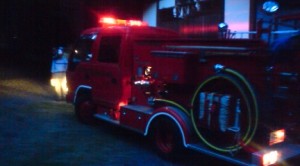 For those of you who would like some more details, let me tell you EXACTLY what happened yesterday, August 31st 2019

Pulling into the impossibly narrow road ( if you could call it that!) which leads to the parking lot at the side of the Gosho Komagataki Shrine at about 6PM, dozens of people were already in front of the Main Hall. This included the members of the local little league team, who were waiting excitedly for the event to begin, with their unlit torches in hand.

The precincts of the shrine itself , set in the woods and with a (Concrete bound!) river running through it were decorated for the event with rows of lanterns lining all its paths, and fresh strips of sacred paper hanging from the torii gates.

Inside the main hall,  a ceremony was taking place in which the priest was making prayers for a good harvest and protection from typhoons.. It appeared that only older men were actually sitting inside during this ceremony. It was mostly women and children (and foreigners!) waiting outside 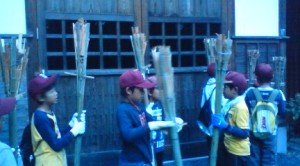 Arriving at 6 pm, the boys from the local youth baseball team were already waiting with their torches eagerly in hand 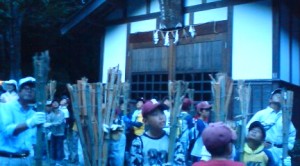 The Guji-San ( priest), then came out to light the sacred fire, which would then be transmitted to all the  torches and then to the God at the top of the mountain.

This was done not with matches or a lighter, but in the traditional way- THE VERY TRADITIONAL WAY- by rubbing wood! This was not accomplished easily, as I assume the priest does this only once a year- and he had obviously not been practicing! 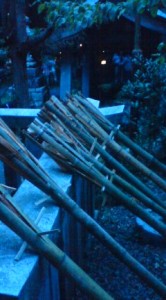 A closer view of the torches, made of bamboo and pine roots

When the flame finally did get going, it was used to light two large standing torches from which then, everyone lit their own torches. 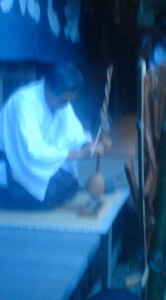 The priest creating fire in the traditional way- friction on wood! 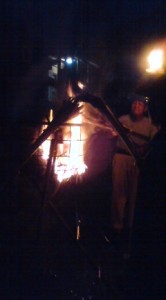 Lighting the torches at the Kattate Matsuri

Lighting the torches at the Kattate Matsuri 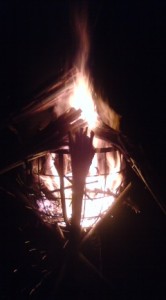 I`m not sure how many torch-bearers there exactly were, but it was certainly in the dozens. In past years, I have heard that usually about 200 torches have been carried up the mountain and that the glow these created could be seen from as far off as Gunma Prefecture! Though this year the number was probably less, it still sure seemed like A LOT of torches- too many in fact for the narrow and densely wooded trail! I was amazed, in fact, that no forest fires broke out as traffic jams often had the procession stopping and standing with lit torches under low hanging trees. Flaming embers were also continually falling to the ground which was covered with plenty of dried out leaves and grass. 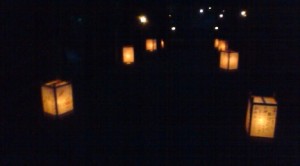 Lanterns lining the path to the shrine

The reason fires did not break out was that some men from the local fire-department were with us the whole time, rushing up and down the trail in the darkness, extinguishing these embers before any serious conflagrations broke out.

Though I was impressed by the fire fighters serious efforts, I did start to get worried when they started drinking beer after we had reached the top of the mountain. The big bon-fire was still going strong and any gust of wind could have sent the whole mountain up in flames! 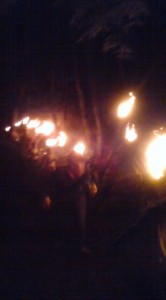 The procession of torch-bearers heading up the mountain 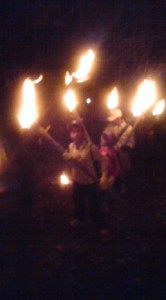 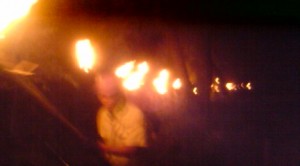 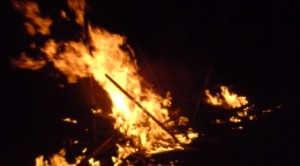 At the top of the mountain, all the torches are heaped into one pyre

At the top of the mountain, all the torches are heaped into one pyre

I have already told you what it was like at the top of the mountain, so no need to repeat myself.

I would like, however, to tell you a little about the origins of this festival. The problem is, that its roots are mostly shrouded in mystery. Tradition, however, says that the torch bearing ceremony used to be a way of commemorating how the 10th century great rebel warrior ( and local hero)Taira no Masakado, who actually declared himself the New Emperor before being defeated by forces sent from Kyoto, scoured the mountain-sides for his uncle- Taira no Yoshikane ( his enemy at that time),- using torches- in the year 937.

No matter what the actual origins of the festival are, the local people, mostly farmers, turned the custom into an agricultural rite, always held on August 31st. This is significant because this is also right about the time of the traditionally important 210th day ( nihyaku-to-ka, 二百十日), which in past ages had always been a day to refrain from agricultural work as it was believed that it was likely for typhoons to occur. This was a day for rituals believed to help prevent typhoons and strong winds.

Besides the ceremonies held at this time of year to prevent typhoons and winds held in Makabe, there are also many other ( more famous) such rites still held in Toyama Prefecture ( the Kaze no Bon Festival), and in Nara Prefecture, at the Tatsuta Shrine.

The fact that the Kattate Festival  is held for WIND PREVENTION ceremonies probably explains the origin of it name- as wind in Japanese in KAZE and Kattate reflects the notions of beating off the wind.

Before the common availability of TVs, computers, and other modern entertainments, the night of the Kattate Matsuri was naturally one of the most exciting times of the year in Makabe.

In recent years, however, the number of participants has been declining, and those who love the event are wondering how they will be able to keep the torch of tradition alive. 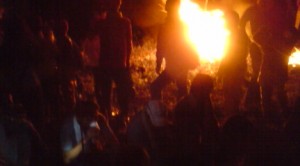 Eating and drinking at the top of the mountain 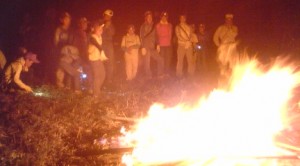 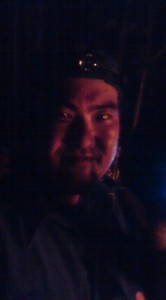 One of the exhausted firemen, tired out from having to continually extinguish little fires during the procession

If  you do plan on joining the Kattate Festival next year and would like to carry a torch, you should bring proper walking shoes, food and drink, and a flashlight . On the way up you have torch illumination, but on the way down you`ll need some light!

Here is my article about another FIRE FESTIVAL of great interest which is also held in Makabe. This one is in winter- in fact it takes place on the day of the winter solstice. Its  called the HI WATARI SAI  ( 火渡り祭) event and it involves walking across burning embers. If that sounds like fun- you are right! read about it here: