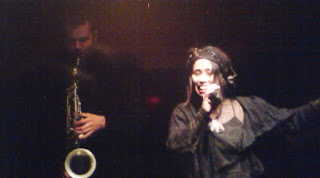 Rain Falls surprised long time TenGooz fans in many ways. The song is built around Hase G`s haunting bass phrases and the melody line for the A pattern came to me on my first hearing. The chorus melody evolved after many practice sessions. I first imagined the lyrics to be about the suffering of the water birds caught in the nets put up by the lotus root farmers around lake Kasumigauara, Tsuchiura City, and had a working title Puppets on a String.
The songs lyrics were changed (forever maybe) as we got involved with the Ki No Ballad project which was a multi-media production based on a concept by artist Elizabeth Robless.
Since Tsukuba`s great songstress Jenny would be singing in the show and needed appropiate material, we decided to adapt the lyrics to fit the shows themes.
The present poem came to me at one shot, though some changes were being made, while first teaching the melody to Jenny at Elizabeth`s studio late one night.
On the recording, of course we have Jenny. Another point of departure for the TenGooz was the input of artist musician Thomas Mayer who put down all of the guitars and helped with the other effects.
Many listeners have commented on the densness of the arrangement (some finding it too busy).
One of the additions to the sound was a set of chimes from my collection of ethnic instruments. We also used them on stage for the live versions.
Give the song a listen and tell us what you think.