O-Bon in July? That is when many in Tokyo and Kanagawa Prefecture do celebrate it. Why the difference from the rest of Japan? 13 July, 2020 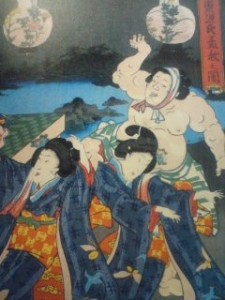 O-Bon celebrations in the Edo Period

Yesterday, while at one of the local shopping  malls, I ran into my old friend Junko Takasaki, who originally hails from Kanagawa Prefecture ( just south of Tokyo). She had obviously been doing some serious shopping and was laden down with bags bearing her purchases. When we got to talking, she said that she had just finished buying some gifts (omiyage) and was now going to head  back to her home-town for O-Bon ( the summer festival in which the spirits of ones ancestors are honored).

Since it was still mid-July, I was at first taken a back by this , as I usually associate the O-Bon festival with mid-August. In fact,  I have always thought  the expressions SUMMER VACATION ( in Japan) and O-BON VACATION to be synonymous, and I have used them interchangeably.  That is because it is in AUGUST, during the school summer holiday, that this festival is celebrated in Tsukuba and most other parts of Japan.

My confusion quickly dissipated, however, when I recalled that many natives of Tokyo and Kanagawa Prefectures ( by native I mean at least third generation) have their O-Bon, which along with New Year`s ( O-Shogatsu) is one of Japan`s two most important religious holidays and occasions for family get-togethers, IN JULY.

It is not only foreigners (like me) who are likely be puzzled by hearing that someone  celebrates O-Bon in July and not August- most Japanese who have grown up out here in The Provinces ( even in Tsukuba, though we are just 50 km from central Tokyo) would be just as surprised. You can do your own survey. Just tell your friends outside of Tokyo ( or Kanagawa) that O-Bon is in July. I`m sure that you will often be met by puzzled expressions. 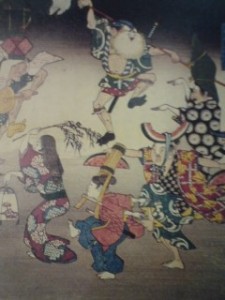 Why is there this one month difference in the timing of O-Bon which separates Tokyo and Kanagawa from the rest of Japan?

The  first step to answering to this question can be found in the fact that back in 1872 the Japanese government CHANGED THE CALENDAR which would be officially used in Japan, from the traditional luni-solar calendar, to the Gregorian Calendar, which was used by the Western nations. Since so many of Japan`s festivals and annual events were connected with nature and the seasons, this through Japanese culture a bit out of sink. This is because the months of the year, designated as the 1st month, 2nd month, 3rd month etc, came to fall about one month earlier than they had before ( for example, the old New Year, the first day of the first month, used to be in sometime in February- that was changed to January). Thus, for example, the Peach Festival ( Momo no Sekku), now falls one month before the peach blossoms blooms and The Star Festival- Tanabata, is celebrated one month before the stars Vega and Altair seem to meet in the sky ( a phenomenon which led to the creation of the festival)

Since all Japanese traditional events came to be held about one month earlier than before, it is only natural that the O-Bon Festival, held in the middle of the 7th month would also move  with the new calendar.

The only problem is- IT DIDNT! Well, it did- but only in Tokyo and Kanagawa. The rest of Japan continued to celebrate O-Bon as they always had, in late summer.

I can offer you two theories on why this happened. One is that, the most MODERNIZED and WESTERNIZED parts of Japan, Tokyo and Yokohama ( in Kanagawa) were the most enthusiastic in taking to the new calendar, even applying it for determining when the ANCIENT Japanese festival for greeting the ancestors` spirits ( O-Bon) would be held.

The other, and one could say that it is just an extension of the first, is that Tokyo and Kanagawa are the LEAST agricultural regions of Japan and that in the late 19th and early 20th centuries farmers were too busy in mid-July to celebrate O-Bon ( which takes 4 days to do). Because of this, they HAD TO wait until mid-August, and more free time, to be able to properly greet and honor the ancestors spirits.

I also feel that the Japanese connected the season ( in what is now called mid-August), after the rains, the time of year when Japan is at its pulsatingly HOTTEST and when its plants and animals are most ALIVE, with O-Bon. Instead of holding the festival in the cooler, darker rainy season, they felt it right to continue to celebrate it in the steamy weather, with the atmosphere reverberating with the cry of cicadas.

No matter what the reason, the fact is that O-Bon IS celebrated at different time of year in Tokyo. This has led to a situation which could either be a blessing or a problem, depending on the person. I`m talking about the fact that in Japan SUMMER VACATION is in mid-August throughout the country. For those who celebrate O-Bon in July, this means that you have NO VACATION from work, and if you happen to live outside of Tokyo ( for work, etc.) it is difficult or impossible to be able to get back home for the proper family gathering.

On the other hand, when summer vacation DOES come, in August, these same people are free to enjoy themselves ( travel, etc.) while those in the provinces have to spend their vacations staying home for O-Bon, or feeling guilty about not doing so!

It is also interesting to note, that the custom of sending O-Chugen ( mid-summer gifts) has become a JULY ritual throughout Japan, even though it is originally connected with O-Bon. This is of course due to the fact that the department stores which promote the extravagant custom ( sending beautifully packaged but highly overpriced gifts- mostly foodstuffs to parent, teachers and others to whom obligation is due) have their headquarters in Tokyo where O-Bon IS celebrated in July.

I have written more on O-Chugen and its origins in a previous article.

But in the meantime- do not be surprised to hear friends, colleagues or students tell you that they celebrate O-bon in July- its just that they are from Japan`s least agricultural and earliest Westernizing areas – Tokyo and Kanagawa!

(It is interesting that there are also MIXED MARRIAGES between people whose families celebrate the different O-Bon seasons- such couple often celebrate the festival TWICE !

And don`t forget that in Tsukuba and the rest of Japan we are entering the heart of the Gion Festival season. These are dozens of these traditional events coming up this month in and around Tsukuba.