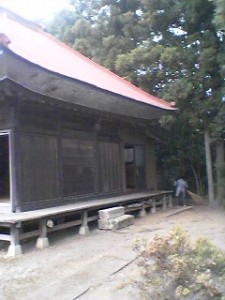 It was the 27th, and July is an odd numbered month (the 7th), so I knew where I could find Mrs. Okamino. I built up the determination to step out of my house and into the throbbing heat. With notebook and pen in hand and a squint on my face, I slowly walked around the corner and headed towards the old Sakura City Office. About a hundred meters later, I came to an old wooden structure covered with an out-of-place red tin roof. When I saw that the doors and shutters were open and the cushions airing out in the sun I felt reassured. And, just like clockwork, there she was, broom in hand, vigorously sweeping the grounds of this old neighborhood meeting hall where women regularly gather to pray for health, fertility, and easy delivery.

Tsukuba has been changing rapidly, with new buildings going up everywhere and a large influx of out-of-towners. Still, with all the dramatic changes, the city can be seen as being a collection of villages which retain their own identities. The community spirit can most easily be recognized by outside observers in the village Matsuri (festivals). If you look more carefully, however, you will find other signs of what life was like before this area was turned into the Science City. 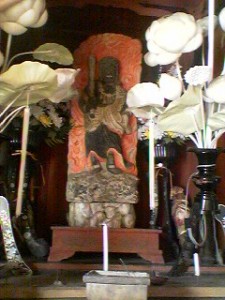 One interesting feature of the village (shuraku or buraku) is the meeting hall (shukaijo). Now many of these have been rebuilt as what look like prefabricated sheds. However, you can still find several meeting halls that are used for KO (講）and they are traditional wooden structures which could be mistaken for small shrines or temples. Ko are prayer or study meetings which became popular in this region in the Edo Period (1600-1868). There are a confusing variety of ko, and I have described the most popular one, The Ko of the 19th (ju ku ya ko,十九夜講) in an Alien Times article.

Mrs. Okamino was concentrating intensely on her sweeping and did not notice my approach (or was she just pretending?). I almost felt bad that I was going to disturb her, but I was determined to talk to her about the night’s Fudo-Ko and to get some pictures of the inside of the Fudo Hall, especially of the fearsome statue of Fudo-Myoo, whom the women respectfully refer to as Fudo-Sama (which I had only ever had a peek at  through the grating of at the front of the hall).

For many generations, a Fudo-Ko (women’s prayer meeting in front of the image of Fudo Myoo) has been held at this worship hall in Higashioka. It had always been held once a month, on the 27th, but now with it getting harder and harder to get the neighborhood women together (only eight regularly gather now), the frequency has been reduced to one meeting every other month.

The women take turns being toban, the person in charge of preparing food and tea, and they get together at about 8 pm, chanting the Dainichi Kyo Sutra, which they all know by heart. This is done before an impressive wooden image of Fudo Myoo (不働明王), one of the 5 Deva Kings to have been introduced to Japan in the 9th century by the great Buddhist priest Kukai in the 9th century. For some reason, Fudo, the Unmoveable One, became the most popular of these frightening figures, and a cult of Fudo spread throughout the Japanese islands, with special success in the Kanto Area, where he was worshiped by both warriors and peasants alike. The most famous place known for its worship of Fudo is Narita-San Temple(Shinsho-Ji),one of the most visited religious sites in all of Japan. This popularity is interesting because in India and China it is RARE to find an image of Fudo alone (one that is not part of the group of all five myoo).

The Fudo image at the Higashioka worship hall is impressive indeed with his sword and rope and halo of flames. What a contrast to the serene Niorin Kannon image worshipped at the Ju ku ya ko(19th night Ko). This difference in countenance, however, does not indicate a difference in objective, as the Fudo Myoo uses his fiercely determined expression to bring people to an understanding of Buddhism. He is believed to bring good health and easy delivery, prevent disasters and even bring monetary success.

Certainly, sitting in the old hall, smelling of ancient tatami mats, with Fudo glaring down as the rhythmic chanting pounds in their ears, could not help but make worshipers reflect on their ways and consider taking the correct, middle path .

Of the dozen or so Ko regularly practiced in this area before WW2, only about 4 are still actively being kept alive. Just across the Hanamuro River in Saiki, there is another very interesting Fudo Hall which I discuss in a separate posting.

There is no listing of these events online or in any printed form. The best way to get information about a Ko near you is to speak to the older people in your neighborhood. They will be very glad to hear that you are interested.