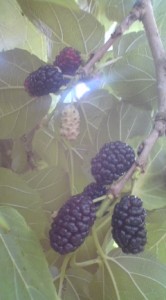 We had just emerged from the woods. And though our pant-legs were soaked  from tramping through the rain-wettened grass and folliage for nearly 2 -hours , our brief but intense encounter with Tsukuba`s nature and the good company of fresh and old acquintance had our spirits soaring high! We sure HAD worked up an appetite, though, since we had hardly taken a break and had been on our feet all morning. That is why the big old mulberry tree (kuwa no ki) standing by the path up ahead, branches heavy-laden with fruit in various stages of ripeness, beckoned enticingly,  like an oasis does to desert travellers.

Looking for the plump, dark purple, or I guess I could say black  mulberries (as oppossed to the white or red ones), because that is their color when they are  ready to be eaten, I plucked them off and passed them out to the excited and impatient kids who were actually vying to scramble up the tree itself in an effort to get at the tempting fruits. While doing this I did not refrain from intermittenly popping a few into my own mouth. MMMmmm. Sweet and succulent-   perfect way to end a hike!

Realizing that we had better leave some fruit for the wildlife (though this was a large enough tree with plenty of mulberry to spare), we continued on to Takahashi-San`s house (she was the organizer of the event) for some store-bought refreshment. When we arrived at her studio-annex she could see right away that we had been NOSHING on the way- all our hands and faces were stained a delicate purple ! There is no hiding the fact that one has been eating mulberries! 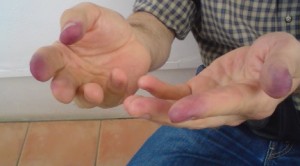 Late May and June are when the fruit of Tsukuba`s mulberry trees (they are not actually berries) are ready to eat. You had better be quick, however, if you want to taste them, or even better, grab a batch of them to take home for use in all kinds of desserts. This is not only because there are other people out there who want them, but also because they are a favorite of small mammals, birds and insects! Remember, if you do carry away some for later, mulberries, high in sugar content, do not keep very long and should be eaten as soon as possible. They can of course be frozen or preserved in liquor for enjoyment throughout the year. Not only tasty, they are also said to be good for you, as they contain plenty of vitamins C and k, as well as iron, potassium, riboflavin and dietary fiber. 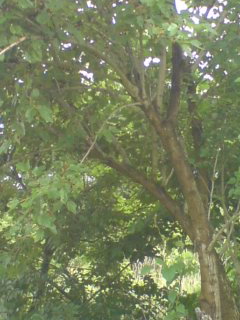 A Mulberry Tree In Tsukuba

Whenever I pass by a mulberry, at any time of year, I cannot help but reflect on the history of this tree and its impact on the course of human civilization. It was around Mulberry trres that about 5000 years ago the ancient Chinese concieved of producing silk, and then of weaving fabrics from their strands (though it is possible that inferior forms of silk  had been indepedently developed in Europe and The Middle East). And in order to get more silk, it was necessary to have more and mulberry trees-  specifically their leaves- which are the sole food source for the finicky silk worms (actually catepillars) which spin the precious threads.

Silk eventually grew to be such a sought after commodity, that the great East-West -West-East trade route which ran from Europe through Central Asia and China to Japan was named after it- The Silk Road.

Numerous references in The Manyoshu, the earliest anthology of Japanese poetry (compiled in the mid 8th century), and the official court chronicle Nihon Shoki (720 AD) indicate that silk production had already become well established by that time. Until the Meiji Restoration of 1868, however, silk was never worn by the common folk ( it was illegal to do so). Raising the silkworms, and the mulberry leaves on which they fed, however, were a MAJOR part of the lives of Japanese farmers  as the catepillars had to be very carefully and tenderly taken care of (often IN the farmers houses). The importance of the KAIKO in their lives can be seen in the fact that they are the only animal which the Japanese refer to with an honoric, which was O-Kaiko-Sama.

For older Japanese, eating mulberries usually bring back fond memories of childhood, as mulberry trees used to be the MOST familiar of all trees (especially in the silk producing area of Gunma, Tochigi, Saitama and Ibaraki) for people who grew up in the first three-quarters of the 20th century. Mulberry orchards were usually palnted around each house and in the days before TV, public swimming pools and Toys R Us, playing with and snacking on mulberry fruit was one of the chief pleasures of summer.

Here is a Haiku, by Takano Sujuu (高野素十, 1893-1976), that I found which captures this nostalgia- KUROKU MATA AKASHI KUWA NO MI NATSUKASHIKI (黒く又赤し桑の実なつかしき) which I translate as – A glimpse of mulberries red and black – mem`ries of childhood come rushing back!

After the outbreak of Second World War demand for Japan`s silk plummeted dramatically and it has come to the point where now I doubt if you if could find a single family around here that raises kaiko.

For more about silk production in the Kanto Region, read my article about Tsukuba`s forlorn KOKAGE JINJA SHRINE, which in past ages threw pilgrims from all over Eastern Japan.

I think I will do some more hiking in the next few weeks. Not only to enjoy the relative lack of mosquitos buzzing about, but also to be able to enjoy some post-hike wild mulberries while they are still ripe and on the trees!

And for a sense what it was like working in the Ibaraki mulberry groves read my Translation of Junichi Saga`s Remembrance of Village Days Past.