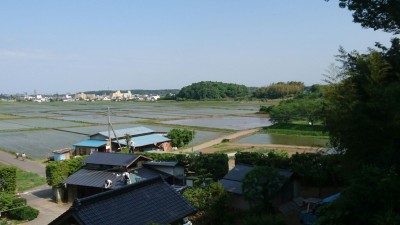 Looking down at rice fields that were first divided into square lots and parcelled out in the 7th century under the Jo-ri system implemented as part of the Taika Reforms of the year 645. The area you see in this picture was, until 3,000 years ago, under the ocean! The plateau from which I took this photo was created by millenia of sea (and then river-water) pushing the earth and piling up the silt . The neighborhood you see below is now called NISHI TSUBO and the people who live there are the descendants of the retainers of Numajiris who controlled the Konda Fortress. This spot, is one of my favorite place to sit and contemplate Tsukuba`s history

From the beginning of May through September, Tsukuba`s rice-fields create a startlingly beautiful – ever changing, landscape. There are three peak stages that deserve special appreciation : the freshly flooded fields of early May, their surfaces  glistening mirrors that attract large water birds (egrets and herons) and bring the boisterously amorous frogs out of the mud they`ve hibernated in; then the deep (impossibly) green, luxuriant rice of late June and July, with darting swallows skimming the tips of the stalks, picking off mosquitoes, and waves of green rolling across the fields with each breeze; and then, the final stage – the golden stalks of September, sagging over low, heavy laden with grain – till it all disappears within a few days time, after which nothing is left but open expanses of straw-color crew-cut and dull brown soil. 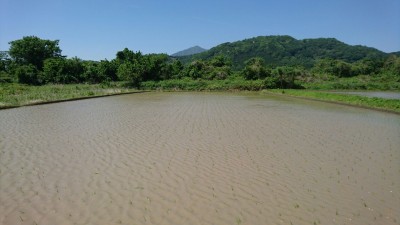 A paddy-field JUST after the young rice plants had been transplanted.

Some of Tsukuba`s rice fields are of great historical significance. I am referring specifically to certain fields in three different Tsukuba “neighborhoods” – Konda (金田), Ueno-muro (上ノ室), and Kangori (神郡), which show evidence of having been created and parcelled out as part of the Jo-ri (Jo-ri sei ー 条里制) of the the 7th and 8th centuries.

The question I`m sure you (both non-Japanese and Japanese) are asking now is – “what the heck is the JO-RI system?”

Well, it was a land division and distribution system introduced as part of the Taika Reforms of 645, which was an effort to get the land and the people under direct control of the emperor (at that time Emperor Kotoku, who reigned from 645 to 649). The reforms involved the creation of a completely new system (borrowed from China) of administering the far-flung provinces (such as the Land of Hitachi, where Tsukuba in now located) through the creation of household registers, the distribution of land to be used for the production of rice, and the assigning of KOKUSHI (governors) to each province to make sure eveything went smoothly- especially the collection of taxes (the KOKUSHI of Hitachi was based in FUCHU, which is now known as Ishioka City). Taxes were to be paid in rice, labor, or other manufactured items- in the Tsukuba area this meant linen or silk cloth.. 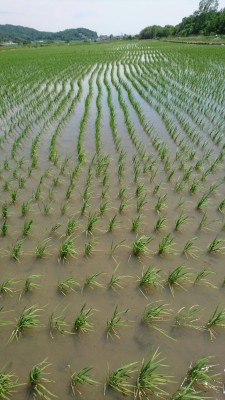 Under the Jo-ri system of land division, the fields were divided into large square tracts, and then divided into 36 smaller squares called TSUBO which were then be further subdivided. The JO and RI of the JO-RI system refer to the north-south lines (JO-), and the the east-west lines (RI) of the grid-pattern that they created. 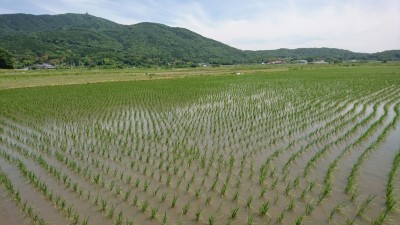 A few days after rice- transplantation in Yamaguchi, Tsukuba

The other day, a perfectly delicious early summer morning (one of the few perfectly beautiful days we get inTsukuba each year), I headed to one of my favorite spots for enjoying “rice-field scenery” -and contemplating Tsukuba`s history – the plateau overlooking the Nishi Tsubo Jo-ri remains, just behind the Sakura gymnasium, in Higashi-oka, Tsukuba.

The plateau itself was formed by the incessant pounding of the sea – which reached that spot till about 3,000 years ago – and the flooding of the river (the Sakura) that was left beind after the sea had receded. When the sea had been at its high point, the pre-Yamato inhabitants of the area lived on top of that plateau where they gathered shells and fish from the sea and hunted deer and wild boar (remnants of their tools, pottery and their meals can be seen at the Sakura History Museum that stands across from gymnasium – you`ll also find there the fossils of the nauman elephant, discovered nearby along the banks of the Hanamuro River). 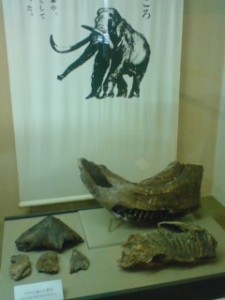 Fossil of a nauman elephant discovered along the banks of the Hanamuro River (in Tsukuba) in 1975.

I walked out towards the edge of the plateau – a wild hare darted by – then another! The woods that had long sheltered them had recently been bulldozed away – they headed for a bamboo grove across the way from out of which sporadically rose the distinctive song of the Japanese bush warbler.

I reached the edge and looked out toward the east – awesome- a waterworld…. with wooded hills, all of them ancient burial mounds, to the south – a testament to the presence of the first Yamato people who`d settled the area, having arrived by ship from western Japan, coming up along the Pacific Coast and then into the huge brackish bay that is now Lake Kasumigaura. These people that conquered and settled the area had started arriving at least two centuries before the Taika Reforms (for fascinating details read the Hitachi no Kuni Fudoki, the 8th century chronicles of this area) – and they most certainly had their own way of running things. They could not have been too pleased with the arrival of the KOKUSHI (governor) from the capital, who they knew was going to make a lot of changes. The most important of these was that the people would no longer be officially working for the benefit of local strongmen, but working to pay taxes and give loyalty to the emperor in far-off western Japan. 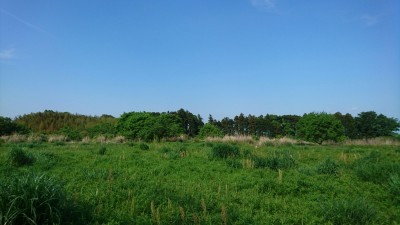 A diluviual plateau formed by the seas continuous pushing. This area is an important archeological site with artifacts from the Jomon and Nara Periods being especially abundant. Because of this the area had long escaped development and had become an unofficial wildlife refuge of sorts – but now the bulldozing has already begun and the whole beatiful spot is imminently doomed

A very  little part of what  is now Tsukuba City was suitable  for rice cultivation back then. It was only along the rivers- what are now called the Sakura, the Kokai, the Hanamura, the Yata …. that productive fields could be established

The “highlands” that in recent years have been turned into the Tsukuba Science City were too dry for rice. The people who lived up there in the woods, could only grow vegetables and catch any small animals they could, while the best connected of the conquerors took the best rice lands along the rivers . This led to a distinction in social class and culture – that persisted in Tsukuba until recent decades. The rice gowing people who lived in the prosperous villages along the rivers – Konda, Hojo, Kurihara,Kamigo, etc. were called AKUTO – a local word, not found in any dictionary of standard Japanese that can refer to both the fertile rice-growing land and the people who lived there (one theory suggest that the word AKUTO derives from the Akutagawa River in western Japan, that like the Nile River, frequently flooded depositing fertile soil up on the nearby plains), while the vegetable growing (and hunting) people who lived in the woods above the fertile river valleys were called NOGATA.

I will never forget Oyama-sensei`s story. He was born just before the onset of the Second World War in a neighborhood called Maeno – which is now beind the High Energy Physics Laboratory. The first time I was alnone with him, a retired school teacher and principal beloved in the community, he told of how as a kindergartener he was taken from his village on an excursion- into what was then the big town in the area, Hojo. Shabbily dressed, the townfolk pointed at him and his little class-mates saying “Look, Nogata bo!” (boys from the non-rice areas!).

Being mocked like that apparently left a wound that remained unhealed even after 70 years…. I thought about Yama, as Oyama-sensei liked to be called, as I gazed down on the flooded fields below. 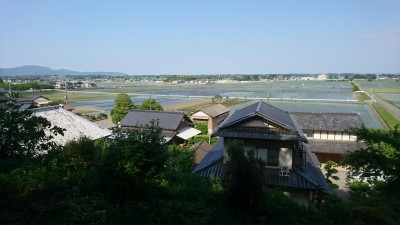 Looking down from that plateau, over the Nishi Tsubo neighborhood 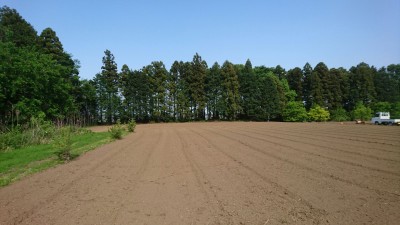 This is the plateau above the Jo-ri rice-fields in Konda, Tsukba. A rich archaeolgical site with lots of ancient pottery (more than 3,000 years old) and the ruins of one of the government offices established after the Taika Reforms to make sure taxes were properly collected. This lovely area, full of bird and mammal life will soon be paved over for a road to a new housing development. 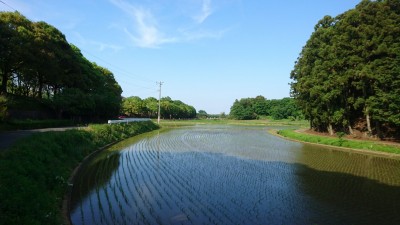 Once an inlet connected to the sea, now a charming yatsuda-style rice field