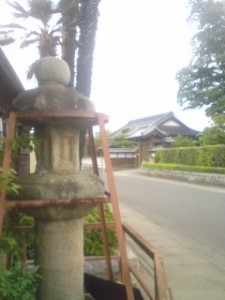 TAMING WILD SPIRITS has always been deemed vital for maintaining peaceful societies. Moral and religious precepts drilled into children from a young age by parents and teachers ( at the behest of the powers that be) along with the threat of various punishments (in this life and in the next) have long been used towards that end). Rulers have also always found it useful to relieve any other pent up youthful energies and tensions by unleashing violence upon outsiders- those of different races or religions, or those who spoke  different languages. Just another way to keep things peaceful in the mainstream community( Interestingly, in Japan during the Period of National Seclusion ( 1633-1868) when the option of attacking Korea was not available as a STRESS OUTLET and with the absence of a natural minority target, it was the OUTCASTE CLASS ( ETA) and the merchants ( both artifically created castes) which were unfortunately used as targets for occassional blood letting)

In Japan today, it is probably the schools which play the most important role in shaping the moral consciousness of children. And though Japanese public education is completely secular, it has proven to be quite effective in creating a society with relatively little violence and vandalism. All of this without resorting to threats of hell and damnation. 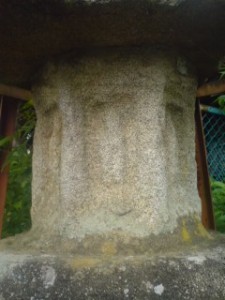 A close-up of the weather-worn Jizo figures

That is why I find it interesting ( and ironic) that just beside a nearby elementary school,Sakae Shogako ( 栄小学校), in Tsukuba`s old Konda district, there is a weather-worn stone monument which local legend claims SEES INTO THE HEARTS of all who pass by – and sends stones hurling at anyone who has done evil or bears ill-will in his/her mind!

We can thus see how in my neighborhood, children (and others) were trained to be GOOD ( and to even have only good thoughts!) by the creation and perpetuation of this legend.

When I asked some people who live in the area if they could recall any actual instances of stones flying out at anyone, they all replied with sly smiles: Of course not! In Konda EVERYONE is good! 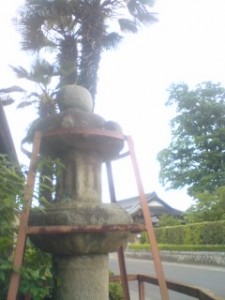 Nobody is exactly sure when this monument was erected or by whom. Experts assume it was made in the Kamakura Period ( 1185-1333), as it is done in a style typical to that era.

Besides telling of its evil-fighting powers, local legend also attributes the creation and establishment of this monument in Konda to the 5th SHIKKEN (shogunal regent) of the Kamamkura Period, Hojo Tokiyori ( 北条時頼). There are many stories around Japan of Tokiyori, who is believed to have travelled around the country incognito, always trying to help the common people, after he retired as regent.

The story goes on to say that in those days of disorder and violence Tokiyori erected here and there monuments of the Six Jizo ( important figures in the Buddhist pantheon) to ease the sufferings of the people. 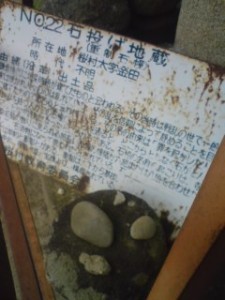 Talking with people in the neighborhood, I have also heard that on the land on which the elementary school now stands there once was a large manor house.They say that in that house there once lived a fair maiden. When the the manor was attacked by a band of warriors ( or brigands) the girl was attacked and killed- the grand house burned down. It is the spirit of this unfortunate girl that the local people believed took up residence in the stone monument and has reacted to evil whenever it came near.

For generations this story helped keep the residents of Konda honest.Some still believe in its powers today. I, for one, make sure to steer clear of the old stones!