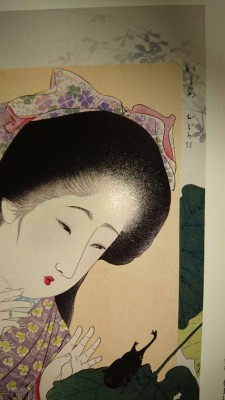 When John, Paul, George and Ringo arrived  in Japan back in 1966, screams of delight filled the air. As recently as 2018, Paul McCartney proved that he could still get crowds of women screeching – and there was even some recent excitement over a re-mastered version of the Sgt. Pepper album, put out to commemorate the golden anniversary of its release. 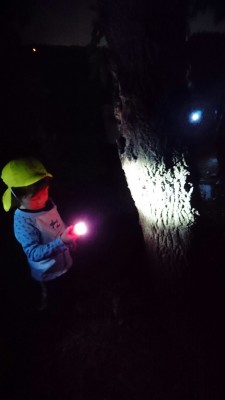 Towards the end of June Japanese kids head into the woods after sundown and scour certain types of trees (kunugi and konara, in particualr) for stag or rhinocerous beetles. They bring them back home in special insect cages and then take care of them in plastic cases filled with saw-dust or soil and a little perching log or two. The beetles, who suck on tree-sap in the wild, are fed with special beetle jellies or fresh fruit, their soil moisten with gently sprayed water.

More than 50 years of Beatlemania. When you think of cultural longevity, though, that`s a mere drop in the bucket when compared to Japan`s more traditional BEETLE-MANIA (spelled with a B-E-E-T-L-E, just in case you didn`t notice), which has involved (if not purchased from beetle dealers in the cities and towns) the search for, collection of, and admiration of beetles – which were often lavished with tender loving care. 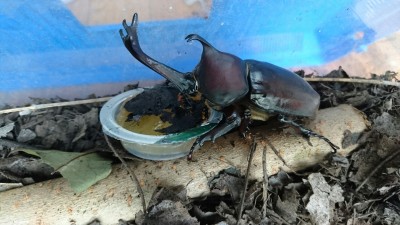 Since beetles are one of the largest groups of insects (which includes lady bugs and fire-flies along with about 400,000 other species!) I had better be more specific and tell you that I`m talking about a special fondness for two particular types, which have over the centuries grown large (and developed impressively large with very “masculine” features in the males) while sucking the abundant sap which has flowed from the trees in the SATOYAMA (carefully tended woods in and around traditional hamlets).  KABUTO MUSHI (rhinocerous beetles) and KUWAGATA MUSHI (stag beetles). It`s something that has been going on for centuries, and the excitement aroused (often expressed in boyish shouts of glee!) each summer with the emergence of these amazing insects will persist long after the Fab Four have been forgotten by the general public. 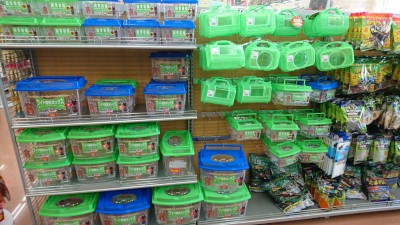 Insect hunting supplies – the green cages in the middle are MUSHI KAGO (insect cages) which you will see little kids carrying with them during summer – even to school!

This past weekend, it almost  felt and sounded as if some rock stars had dropped by to play a gig. One of the local dads, announced that the beetles had emerged from the soil – and that he`d be leading an expedition into the woods to collect some – squeals of excitement, screeches of delight… a dozen boys aged 4-11,  ran home to get their special nets and bug cases (mushi kago) their flashlights and their boots (in Japan, even little kids on an insect hunt are all equipped with the official “gear”.

If you had cycled by the woods you would have heard the frenetic chatter and seems the crazed flashlight beams occasionally cutting through the trees and up into the sky (reminiscent of the search-lights desperately trying to illuminate American B-29s).

The group emerged jubilant from the woods with their booty at 9 PM – a rare late night adventure for the kids (including a 4 year-old). The high of the hunt kept them up a few hours more as they set the beetles in their boxes and gave them jellies to suck on. 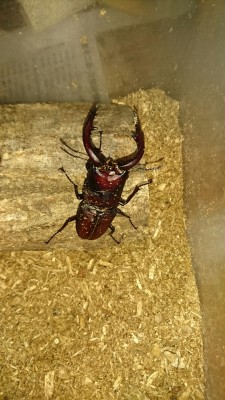 As with other annual events, shops begin to prepare for the beetle season (which begins in late June) about a month in advance. Pet shops, Hyaku-en Shops (Dollar Shops) and department stores put out large show cases full of all the stuff you need to catch and raise beetles! 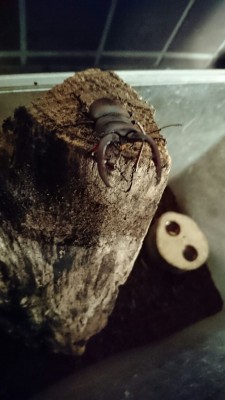 And for real enthusiasts, those of us who try to raise adult beetles from their eggs laid the previous August, through their larvae (from May thru mid June) and chrysalis stages (late June). It is an amazing process to observe, endlessly better for the kids to focus on than their play-station  games and the like. 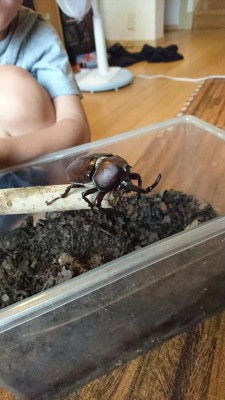 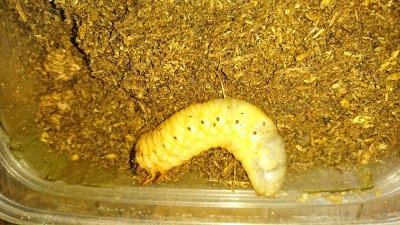 Many raise beetles from eggs laid last year. Here is a larvae that we kept in mulch made of kunugi wood pulp and soil. We have to keep it all clean by removing the dropping everyday and spraying some water to maintain moisture levels. The larvae spend most of the time hidden under the soil, but occasionally come up – though I`m not sure what for… perhaps to have their soil cleaned or moistened. 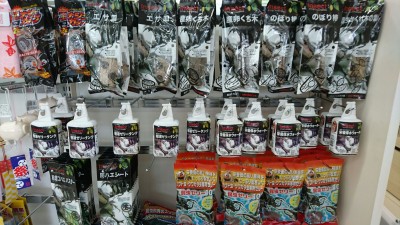 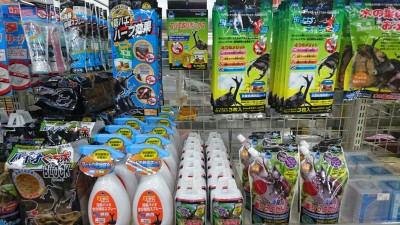 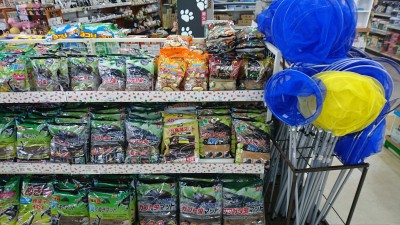 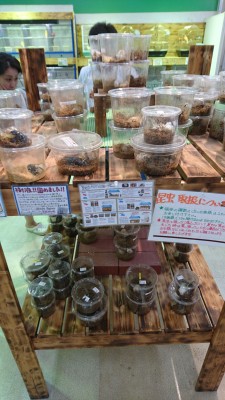 Beetles on sale at the pet shop. Kids can be greedy – and even after they`ve caught half a dozen beetles in the woods, they still might want to get a special variety from the pet shop. These can run from hundreds to tens of thousands of yen 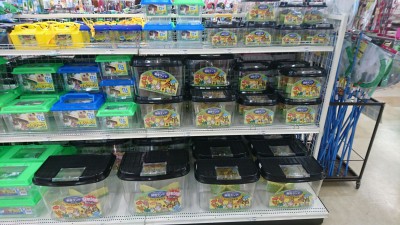 The plastic cases (that most Japanese homes out in the country have at least a handful of) for raising, tadpoles, crayfish, ricefish – or beetles! 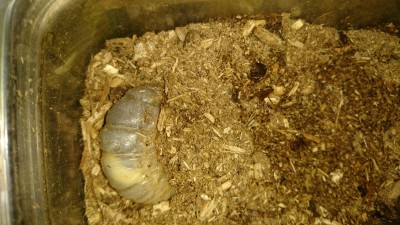 One of our larvae – the brown clump are its poop. This case is ready for a cleaning! All the larvae need is moisture, sawdaust and soil! They don`t eat the jellies till they become beetles! It`s an amazing transformation they undergo and it can enthrall the entire family 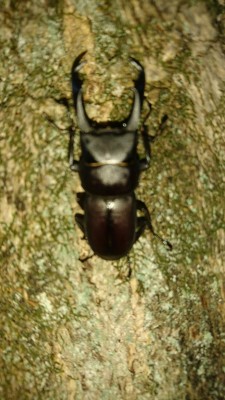 A kokuwagata ( a sub-variey of stag beetle) discovered on a tree in Matsushiro, Tsukuba. 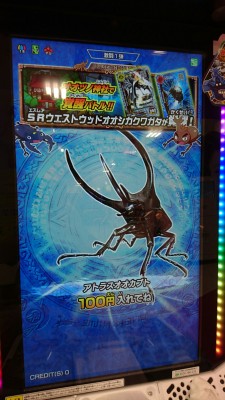 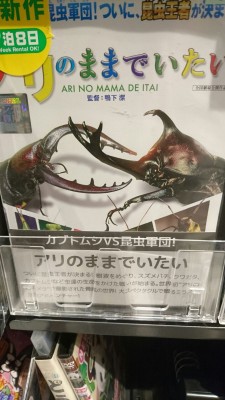 Beetle Battle DVD. Very popular among young Japanese boys. The fights are not to the death and don`t usually involve injury. Each beetle simple wants to get his opponent off the perching block so he can rule the roost. Ancient martial artists surely studied and contemplated these battles looking for ways in which one could throw a larger opponent.