In Japan, Summer is Autumn- for Wheat and Barley ! Enjoy the contrasting green and golden landscapes of BAKUSHU- (麦秋) 9 June, 2020 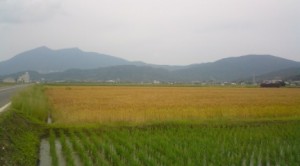 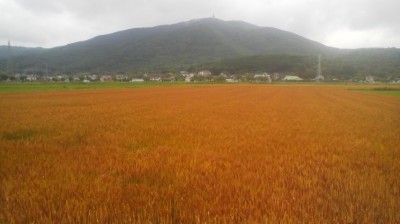 The wheat fields of Oda, Tsukuba ( with Mt. Hokyo-zan in the back) in June

The color that most people would associate with summer in the Japanese countryside is green- in all its possible shades, but especially that of the young rice plants, Japan`s most famous and important agricultural crop. In late May through June, however, a drive or bike-ride around Tsukuba`s  rice growing areas ( for example Oda or Hojo), will show you that just as the paddy is starting to fill out, deep green in the flooded fields, the MUGI (麦）, which in Japanese could mean either wheat or barley, is turning a golden brown and is ready to be harvested. The contrast in colors beween the crops is striking. The Japanese even have an expression (or two) to describe this beautiful scene, and this time of year (early summer) in general- BAKUSHU ( 麦秋)- or MUGI NO AKI ( 麦の秋)- which can both most simply be translated as- BARLEY`S  AUTUMN.  I probably dont have to mention that autumn signifies harvest time (but I just have, sorry). 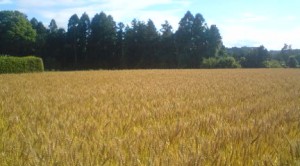 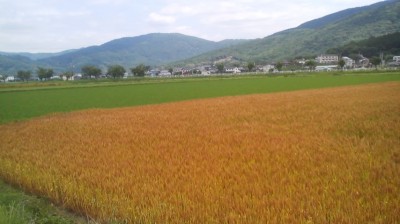 This week might be your last chance to savor and photogragh this special agro-scape this year, as the farmers like to get in the wheat and barley before the big rains come. If you are able to have a look, please know that most of the MUGI in Tsukuba is wheat (KOMUGI) which will be ground into flour and made into noodles (udon and ramen). I have confirmed this by visiting the local branch of NOKYO, the giant agricutural co-operative. There might also be (but very little around here), some barley, which is used for producing beer or MUGI CHA, barley tea, a staple of Japanese summer.

Anyway, maybe its better not to waste your time reading this. The reapimg machines are out. Get your cameraｓ and head out to the fields, or just take it all  in with your eyes- The Barley Autumn- BAKUSHU- will be over before you know it 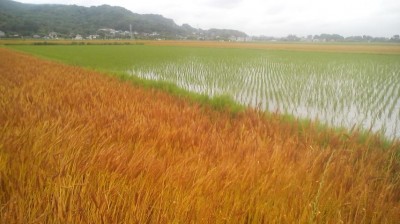 The wheat and barley almost ready while the rice is just starting- Oda, Tsukuba ( late May ) 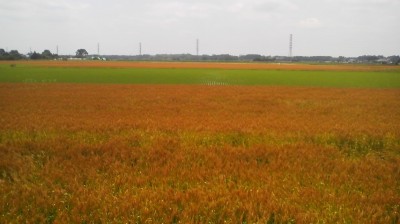