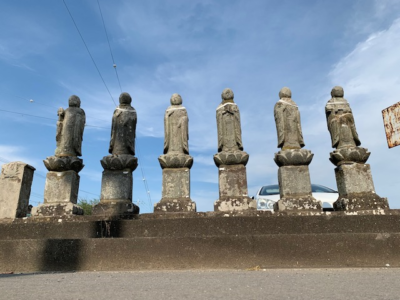 The weather-worn Six Jizo of Higashioka (erected sometime between 1751 and 1763), and standing, as Six Jizo statues so often do, at the entrance to a cemetery, where each different one is believed to give aid to souls trapped in a particular one of the Six Buddhist Realms of Transmigration. However, after carefully examining the iconography of these Six Jizo, I realized that they were six in NUMBER ONLY and not in variety! Two of them are apparently the same form of Jizo – while another type that belongs in this set is missing.

Cycling towards Tsukuba`s old Higashioka neighborhood (just 2 km or so east of Tsukuba Center), I had in mind two things that I wanted to check on. First, whether or not the traditional Fudo prayer meeting (held every other month on the 28th) was still being held at its Fudo Hall during the corona-virus lock-down (no, it was not), and second, whether all the new construction in the area had catastrophically infringed upon my favorite  firefly viewing spot in Tsukuba (yes, it had…) 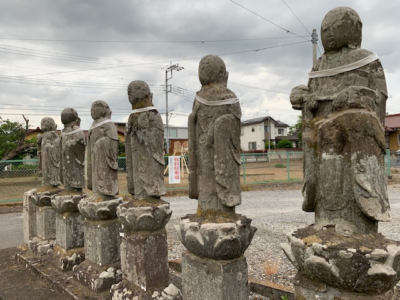 But as I crossed the Hanamuro River and pedaled up the slope that took me past the “Miracle-working Migawari Amida” (near the Hanamuro Intersection and the site of the old Hanamura Castle), another idea popped into my head – why not first drop by and see some friendly old faces! I was thinking of the gentle visages that  used to greet me (and give me solice*) in the days when I would have to go to the JA (Japan Agriculture) office in Higashioka every month to pay my gas bill –  those of the Six Jizo statues of Higashioka (once considered important cultural assets of the old Sakura Mura Village), which stand at the entrance to an old cemetery between a shabby old Tenmangu shrine and the JA office. 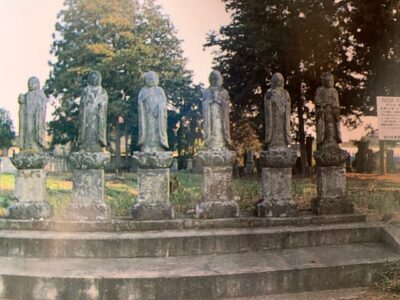 Bfore the tree were cut down to make a parking lot. 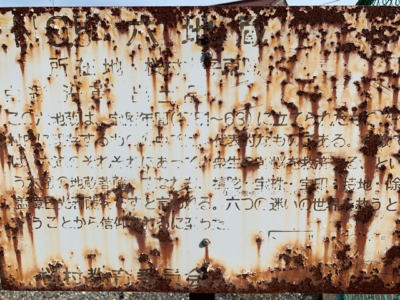 The Beautifully rusted explanation-sign beside them reads: Six Jizo, Location: Sakura Village, Oaza: Higashioka 480. Origins and Artifacts: These Six Jizo statues were erected on this site sometime between 1751 and 1753. They are among the representative works of the village. In Buddhism there is the belief that there are six types of Jizo Bosatsu that bring relief to sentient beings suffering in each of the Six Realms of Desire and Karmic Rebirth ( These are realms of: Hell (pain), Hungry Ghosts (desire), Animals (ignorance), Ashura (jealousy and fighting), Human (rare opportunity to practice) and Deva (temporary pleasure). The Jizo are: Danda Jizo-, Ho-ju Jizo-, Ho-in Jizo-, Jiji Jizo-, Jogaisho-Jizo- and Nikko-Jizo- (Sakura Village Board of Education)

So swinging a couple of turns and coasting down the narrow street that leads to the JA complex, I pulled up in front of the six statues, which on their pedestals were taller than me (which is not saying much!), thinking to myself “long time, no see!” But something was different… there was something missing…too much light… AHHH… the background! These six 18th century carvings had stood, as I knew them, by a path that led through a dark cedar grove to a graveyard. The gray stone was a beautiful contrast to the evergreen trees… and now those trees were all gone -with nothing left but an unseemly gravel surfaced parking lot! How disappointing! The sign that had been put up years ago by the local Board of Education, had changed as well, though the extreme state of rust and corrosion I found it in somehow made it more beautiful than it had been before (though much harder to read!) And the Jizos themselves had not faired very well either, exposed to the elements as they had been for all these years – and perhaps (as some damage might suggest) they had even fallen over when the big quake struck back in 2011.

Anyway, still glad to be seeing them after all the years, I decided to give them a careful (older and more patient) look – something I had never really done before. First I deciphered the writing on the rusted sign (which took a bit of time) and then I carefully studied the iconography of each statue to see if I could identify each of the individual jizos that the sign said were depicted there. 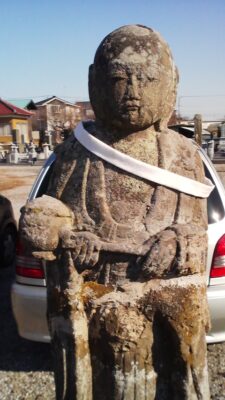 And then, after scrutinizing the statues, going back to the sign, going back to the statues again and so on and so forth, I became a little confused. So I took out my smart phone, went online, and did a search of the names of the Jizos mentioned on the sign. When I looked at what had come up, the puzzle only thickened!  The most distinctive of the figures in the Hanamuro Six Jizo set (for me) was the one holding the incense burner (see photo above) with the long handle (because it is so unusual) – and I couldn`t such a figure among the different  Jizos mentioned in the sign. 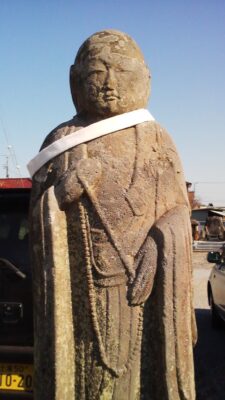 There are, however, different groupings of Six Jizo that have appeared over the centuries, and I DID find the one with the incense burner in a different grouping that appears in the Illustrated Compendium of Buddhist Images (Butsuzo-zui, 仏像図彙) of 1690. It was called  法性地蔵 (Ho-sho- Jizo) – a name not mentioned among those listed on the rusted sign. 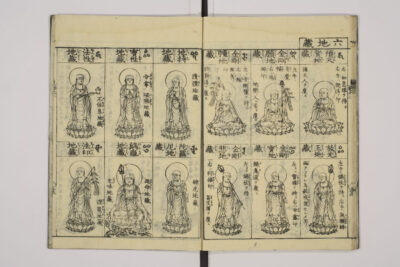 Two different Six Jizo groups shown in the Butsuzo-zui (1690). I first realized that the set on the left was the grouping used at Higashioka, because I recognized the distinctive 法性地蔵 (Ho-sho- Jizo) holding the long-handled incense burner (top left).

So I realized that the Sakura Village Board of Education had listed the wrong grouping of Six Jizos – but that was no big deal, right? I mean Six Jizos are Six Jizos, no matter which grouping they are or what their iconography – six different Jizos, each assigned to assist those in one of the Six Different Realms of Transmigration (ROKUDO, 六道).

The thing was though, that things still didn`t match up. I was able to easliy identify three more of the Higashioka Six Jizos from the same set of illustrations in the Butsuzo-i (shown above and then further below) – the one with the string of beads (Chiji Jizo), the one with the ringed staff and Mani Jewel (Keiki Jizo) and the one with palms together in the Gassho position (Ho-sho- Jizo). 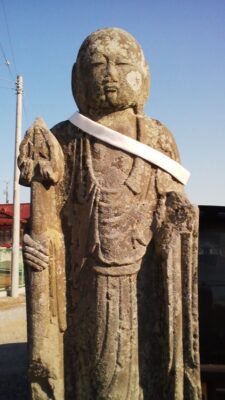 鶏亀地蔵 (Keiki Jizo) also called 延命地蔵 (Enmei Jizo) – the hand in which it once held the Mani Jewel has been knocked off (or simply broken away). He is carrying the staff with six rings (symbolizing the six realms) and warns away small creatures which might in its path so they won`t get trampled upon.

But there were two more stone Jizos, that because of damage, I could not clearly identify. Both of them seemed to be holding a stick of some kind with both hands, and I assumed that one of them was 法印地蔵 (Ho-in Jizo), also called 讃龍地蔵(Sanryu- Jizo), who is shown holding a banner in the iconographic sketches. 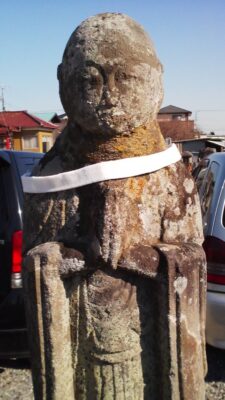 宝性地蔵(Ho-Sho- Jizo), also known as 合掌地蔵 (Gassho- Jizo) with palms of the hands together

But even if one of them was Ho-in Jizo, the “banner holding Jizo” – and BOTH of them seemed to be (though the tops of the banners were broken off) – one of the Jizos which should have been most easily identifiable (because it held a jewel in it`s left hand and held the right hand up in the mudra of abhaya – with palm facing outward and fingers up ) was clearly not there.

The Darani Jizo, one of the Jizos that should have been among the six of this particular set, is clearly absent. 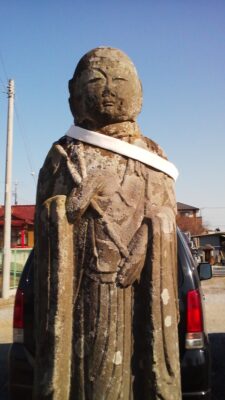 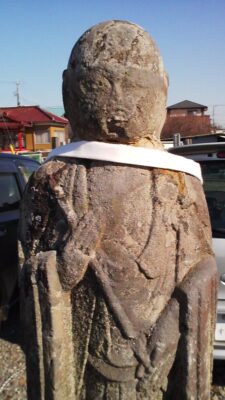 The same as the one above? 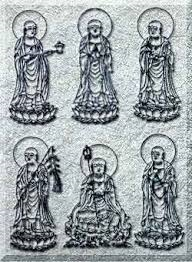 So the question is: Is there some theological reason behind this? For example did someone want there to be no Jizo for Gakki and two for animals? Or is it just the case of one of the statues having been broken and carelessly replaced with a different statue (made at the same workshop in a similar age) that didn`t actually fit into the set? Remember Jizos are often covered with red bibs so noone would know the difference anyway!

Maybe, if I have the time in the future, I will be able to offer an explanation…. 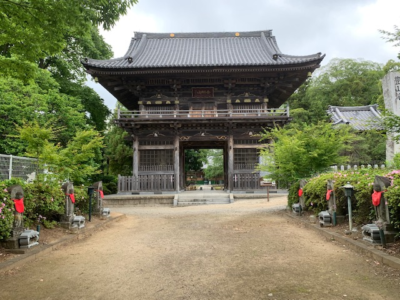 To illustrate my point, here is a temple, Ampuku ji, a few km east of Higashioka, where the Six Jizo standing outside the main gate – all bibbed! And that means the iconography is covered! 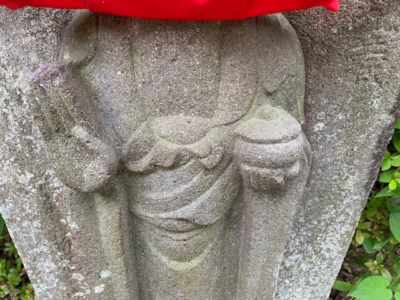 I had to lift the bibs to find what I was looking for… and VOILA! Dirani Jizo, whose iconography cannot be found among the Six Jizo of Higashioka. 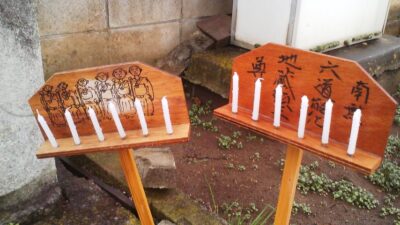 An extremely interesting feature of the Tsukuba area is the abundance of these Hand drawn Roku Jizo which can be found at the entrances to most cemeteries. 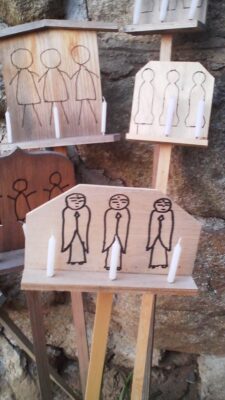 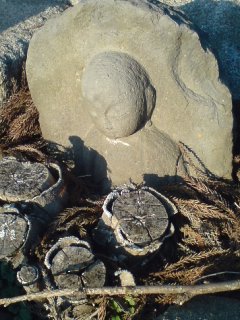 Jizo in Saiki, Tsukuba. And of course, there are many more Jizos in the Tsukuba area that are not Six Jizos. They are easily recognizable because they have shaved heads, are dressed like Buddhist monks ( or appear with child-like features). Their function is to give aid to those in need of it, and their are different types of Jizo (dozens) who are believed to help those in specific situations. 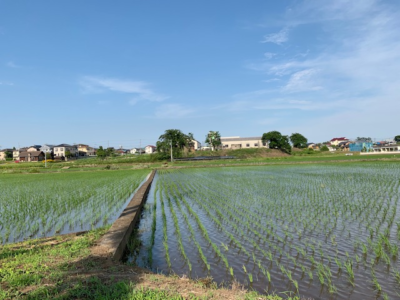 The rice fields beneath the hamlet of Higashioka – with the JA office among the trees. This village, which had long been known as Oka Village (岡村) after having broken away from Konda Village (then known as Kowashimizu) in the 正保 Sho-ho- Era (1644-1648). One of its neighborhoods is even now called Furuyashiki, which means the “Old Mansion” and traces of that long vanished manor-house have actually been found (during construction of the JA complex). Before JA was there, the little hilltop there had been left wild. According to the old folks who lived in the area that was because of the abundance of snakes (something I can also attest since I lived in the area for many years!). Interestingly, during much of the Edo Period Oka Village was not part of the Tsuchiura Domain (as was Konda Village) but the territory of three HATAMOTO (shoguanl retainers) and then, the rice-fields that you see in this picture were TENRYO – under direct control of the Shogun in Edo Castle!