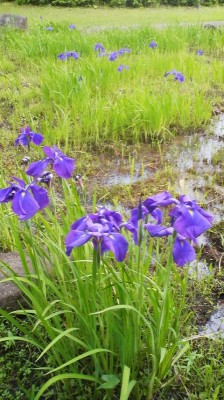 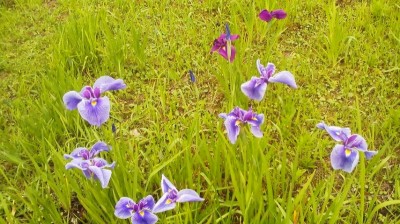 Irises at the Expo Memorial Park in Tsukuba 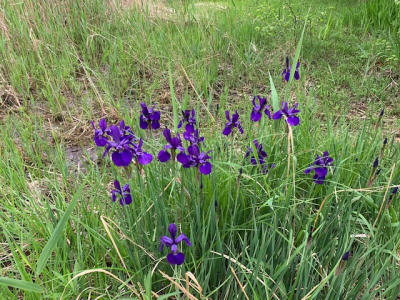 Irises on the morning of May 5, 2020. As I gazed at them I turned to see where an urgent staccato squeek was coming from – and I was lucky enough to catch glimpse of  two strikingly blue and orange kingfishers, this area`s most beautiful bird, flash by (Matsushiro Park, Tsukuba)

The most celebrated flowers of spring in Japan, namely the UME (plum blossom) and the SAKURA (cherry blossom) are pretty (in a soft and delicate way), and certainly evoke excitement as they herald the passing of winter. As for me, however, I much prefer the deeply-hued, passionate, sensuous flowers of early summer, in particular the IRIS (ayame, kakitsubata, or hana-shobu, in Japanese). I ask: what scene could be more beautiful than their purple glow seen emanating from the mist , on a cloud-darkened, rainy-season day? Irises can be enjoyed at several peaceful locations in Tsukuba City, places with ponds, such as the Expo Memorial Park (万博公園, Banpaku-Koen) or the Tsukuba Botanical Garden. These are ideal spots to savor the season and the scenery without the crowds or hullaballoo usually associated with flower-viewing in Japan. However, if you enjoy sharing in the excitement of a large group of picture snapping, souvenir buying revellers (something you won`t be able to do this year), two neighboring cities (though they are in different prefectures) about an hour’s drive from Tsukuba are currently hosting their iris festivals. I’m talking about Itako City (潮来), in Ibaraki and Sawara (佐原), now part of Katori City, across the Tone River in Chiba Prefecture and their annual Iris Festivals. Both events were scheduled to start on May 27th and run  through June 26 (Ah, what could have been!). 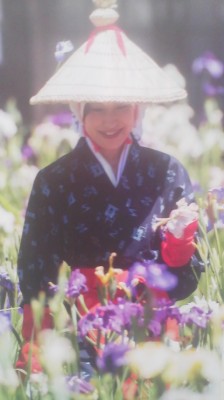 At the Iris Festival (Ayame Matsuri)

Two  years ago, in a rush of enthusiasm, I headed off to Sawara (which is anyway one of my favorite towns in Kanto) for the opening of the festivities. I soon was to find out that I had jumped the gun, as very few of the 150,000 irises in the hundreds of varieties which grow there had started to bloom. I could still enjoy plenty of flowers while the hypnotic beat of the Sawara Bayashi (festival music) filled the air as musicians were ferried through the canals on traditional, pole propelled zapa boats. As you can well imagine, there were also plenty of vendors selling irises and iris related souvenirs out of stalls. 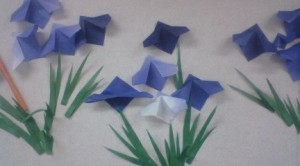 Origami iris decorations at a hospital in Tsukuba

In Sawara, the Iris Festival will be  held at the Aquatic Botanical Garden (水生植物園, suisei shokubutsu en), about 15 minutes from the city’s historic district. Many visitors to the botanical garden also take boat tours through a narrow canal over which pass 12 small unspectacular bridges. This might be fun for the kids, but otherwise should be avoided, as it would take time away from the rest of Sawara, which is really of interest to anyone who likes to get a glimpse of the old Japan.

Once a great merchant town, thriving on the river trade which passed between Edo and the countryside to its north, the historical district of Sawara still boasts many old shops and houses from the Edo Period (1600-1868). The little river which runs though it (the Onogawa) is lined with weeping willows and there are some old bridges across it, one which regularly emits water and music!

What I like most about Sawara, however, are the Ino Tadadataka Museum and the Katori Grand Shrine. Ino (1745-1818) lived and worked in a shop in Sawara until he was 50, then went to Edo, studied surveying and map-making and then went on to lead a grueling cartographic expedition which culminated in the creation of highly accurate and VERY BEAUTIFUL maps of Japan. The Katori Shrine is one of the most important shrines in the Kanto Area and is unusually Korean looking in terms of color schemes (lots of greens) and decorative motifs. There is always something going within its precincts, and it is unforgettable to watch a wedding procession there, with the priests and shrine maidens(miko) leading the bride and groom among the ancient cryptomeria trees.

One more thing that gives Sawara a star is its festival, or should I say festivals, as it is held both in summer (July) and autumn (October). The festival floats, elaborately decorated by the town’s wealthy merchants, are very impressive and I could say unrivalled in the Kanto Area . 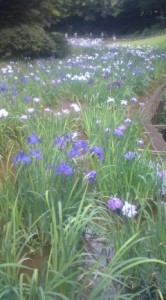 Irises at the Inner Garden of the Meiji Shrine in Tokyo 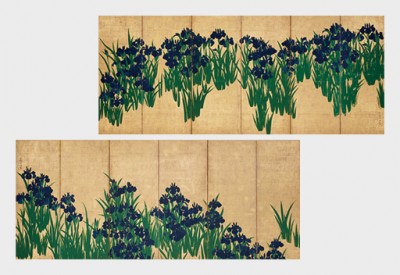 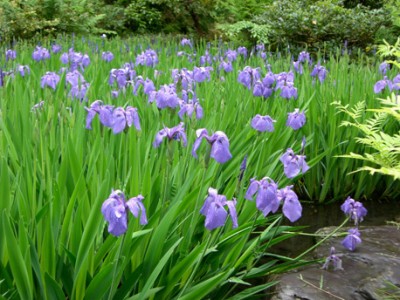 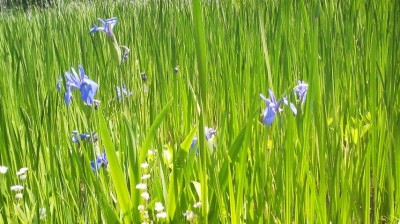 Irises in Hojo, Tsukuba ( May) 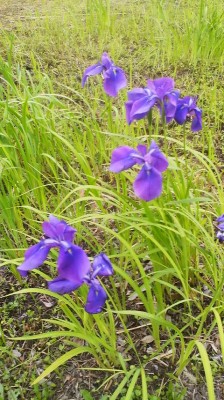