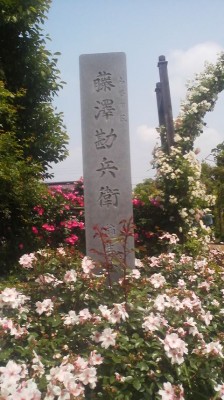 At the entrance to the Fujisawa Rose Garden stands this stone monument to Fujisawa Kanbei, whom some call the Father of Tsukuba City 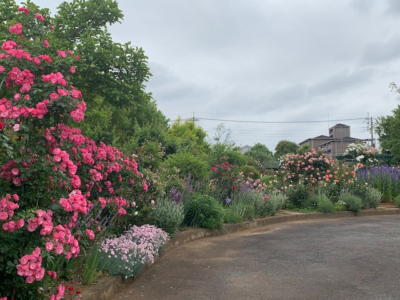 Having a peek into the garden of a nearby house. Roses are now fully abloom – and a highlight of any stroll around Tsukuba these days. Some of the “home-gardens” I have come across are quite impressive. Write in to tell me if you find anything special.

The Fujisawa`s of Furuku, Tsukuba, have long been one of this area`s most influential families. In fact, Kanbei Fujisawa (1901-1994),  is considered by many to be the Father of  the Tsukuba Science City-  and there is actually a bronze statue of him standing in the Matsumi Koen Park  attesting to that fact. In his position as a great landlord ( to this day the family is the second largest property owner in the Prefecture), and as a long-time, multiple term mayor of Sakura Mura (which eventually became one of the six entities which merged to become Tsukuba City) Kanbei-San was able to help this area overcome its most serious obstacle on the road to large-scale develpment- its lack of water- by pushing for the construction of a system of irrigation canals running out of Lake Kasumigaura and  leading all the way to Yatabe (another one of the towns which came to join in on the formation of the Science City). 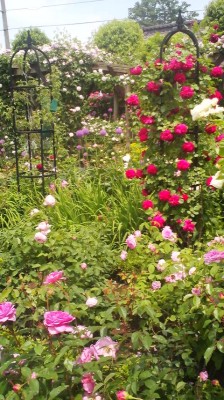 The Fujisawa Rose Garden in Furuku, Tsukuba in May – once it could be called the greatest FREE rose garden in the prefecture – but in recent years they have started charging 500 yen per person admission! Unfortunately the garden will not be open to the public this year – you know why.. 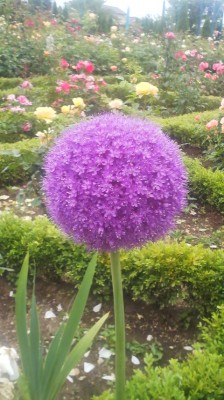 A purple GIGANTIUM at the Fujisawa Rose Garden

Lack of water? That`s right. While there had long been thriving agricultural hamelts along the rivers, much of what eventually became the Science City was a plateau which could not be used for rice cultivation or support a large population because of a lack of water for drinking and irrigation. In fct, one of the distinctive characteristics of this area`s local history is the frequent occurence of  WATER WARS (mizu arasoi, 水争い) which raged between villages- sometimes ending in bloodshed.

Fujisawa Kanbei`s irrigation trenches created new possibilites for this area ( and for his ability to collect rent monies from his numerous tenants, as well!) and must certainly be considered his major contribution to Tsukuba.

Twelve years ago (in 2004), however, another project the Fujisawa Family hoped would make a contribution to the area  was  opened to the public- their amazing rose garden!

Since that time, late May  and early June have become a time for flower lovers from near and far to descend upon the old Fujisawa homestead, creating small traffic jams along the narrow country lanes and turnings old fields into crowded parking lots.

And  with 850 varieties of roses (0n more than 2500 bushes) along with many other ornamental species  carefully and lovingly tended by the staff of volunteer gardeners, no one who makes this pilgrimage goes away disappointed. And when the weather is fine- the atmosphere is absolutely joyous.

With all the dazzling bright color and the air thick with the roses` legendary perfume, a  visit to the Fujisawa Rose Garden might even get your head spinning! 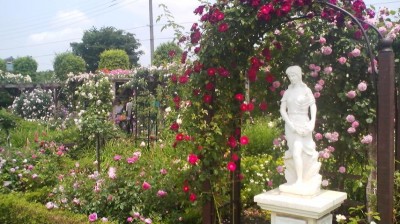 Though there were native species of rose- and that flower IS Ibaraki`s prefectural flower- roses still represent European Culture here in Japan. Thus ,the cheesy nude statues 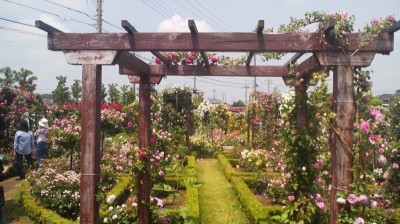 The Fujisawa Rose Garden in May 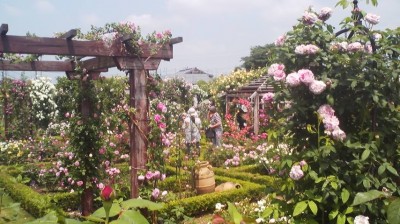 More than 850 varieties in bloom!

And as for the timing, the current patriarch of the Fujisawa Clan ( and a former mayor of Tsukuba City) told me that there is no specific peak time at his rose garden. It will be spectacular right on through autumn, as some varietes wither and others take their place in bloom.

Still, the excitement of THIS season, when the garden first explodes into color- is special, and throngs of people having been visiting in the past few days. Thousands on the weekend. 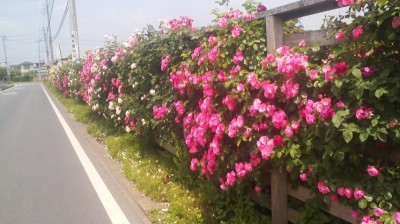 You know you`ve found the Fujisawa Rose Garden when you`ve noticed the country road is now lined with roses!` 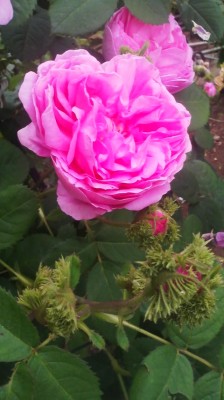 A variety of rose called the Chapeau du Napoleon

When I asked Mr. Fujisawa why the family decided to have this garden designed and created, he stated without hesitation  that they wanted it to be a tourist attraction. Something that visitors  from both Japan and abroad might appreciate.

And the rose IS an appropriate selection indeed as a theme for a garden in Tsukuba, Ibaraki Prefecture. This is because the rose is the official prefectural flower. In fact, the name Ibaraki itself, is said to derive from the name of a native variety of rose which grew in the this area, the IBARA. These thorny plants  were said to have been used by the original inhabitants of this area to build fortresses to defend themselves from the incursions of forces of the Yamato Court. Ibaraki can be said to mean Fortress of Roses. 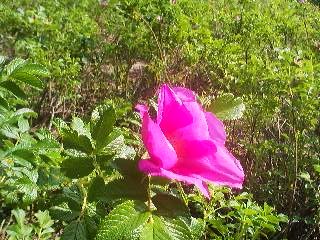 A HAMANASU (native Japanese variety of rose) at the Tsukuba Botanical Garden (May 11, 2013)

While in Europe and the Near East the rose has held a special place among flowers for millenia-  because of its beauty, and even more importantly ( for the ancient Greeks and Romans) for its smell, the native Japanese roses, with their small flowers, plentiful thorns, and lack of strong scent, were never appreciated by Japan`s early flower loving aristocracy ( though as I have already said the native tribes of Eastern Japan may have appreciated the thorny plants for their usefullness in building defenses.

These endemic roses which the aristocrat poets ignored are called the NO IBARA (Rosa multiflora) and the TERIHA NO IBARA (R. wichuraiana). Another variety, which is quite beautiful (and abundant Ibaraki Prefecture) is the HAMANASU, which was apparently not familiar to the denizens of Japan`s ancient capital ( Kyoto and Nara). If they had known this flower, it would surely have grabbed their interest.

The first extant mention of a variety of rose in the Japanese language can be found in the Manyoshu, the oldest- and many say greatest of Japan`s anthologies of classical poetry.

It is of interest, however, that this poem is included in the section of Frontier Guard Poems ( SAKIMORI NO UTA) which were written by men from Eastern Japan ( the Tsukuba Area) who were drafted as border guards and sent off to far off Kyushu. This oldest reference to Japan`s native rose uses the flower to evoke a bitter image- something thorny in which one gets painfully tangled up in and has trouble breaking away from- the feeling that the poet had long ago when hehad to leave his beloved and go off to distant shores.

(Here is the poem:  道の辺の茨のうれに延ほ豆のからまる君をはかれか行かむ  ( MICHI NO HE NO UMARA NO URE NI HAHO MAME NO KARAMARU KIMI O HAKARE KAYUKAMU)- translation forthcoming) 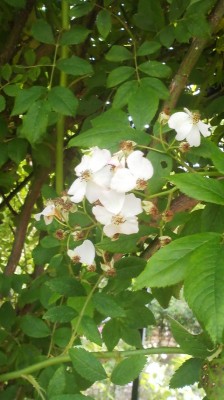 NO-IBARA, the native Japanese species of rose from which the name of our prefecture- Ibaraki- derives its name (at the Tsukuba Botanical Garden)

It was only after a type of Chinese rose was introduced to Japan during the Heian Period, that a rose variety finally came to be appreciated here for its beauty . This flower was called SO-BI (そうび), SA-UBI (さうび), or SHABI (しゃび), in poetry, and it was referred to most notably by the great classical writers Ki no Tsuryuki and Sei Shonagon. See a photo of this chinese rose here:

And while the rose has been used as an artistic motif in Europe since ancient times, it was not until the 14th century that a rose, the type that had been imported from China, was depicted in Japan, having been painted into a picture scroll by the artist Takashina Takakane in 1309. Other famous extant works of art showing Chinese roses came later, but VERY infrequently-  in the Muromachi Period in  a painting by Sesshu (1420-1506), and then on a sliding door painting by the Edo Period artist  Kanno Tanyu (1602-1674).

The modern Japan word for rose- BARA (薔薇) first appeared in the year 1818 in Japan`s first botanical field guide. The word derived from the name of Japan`s native rose- the UBARA ( also the root of the name of Ibaraki Prefecture).

During the Edo Period (1600-1868), while Japan was almost completely closed off to the world, eminent European scientists such as Engelbert Kaempfer, Carl Peter Thunberg, and Philipp Franz Balthasar von Siebold, who had all at one time or another been stationed at the Dutch trading post on Dejima, Nagasaki, introduced the native Japane roses, the NO IBARA, TERIHA IBARA, and the HAMANASU, to the wider world through their writings. Siebold actually brought some HAMANASU back to his native Holland with him, and there they still  popular. 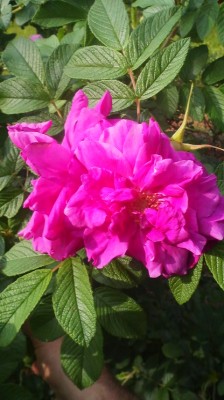 The loveliest of Japan`s native roses- the HAMANASU

HOW TO GET THERE

The Fujisawa Rose Garden is a private garden and there are apparently no official visiting hours- though common sense should be applied – don`t go too early or too late in the day.

To get there you can go by car, bicycle, bus, or taxi ( its a ten minute ride from the TX Tsukuba Terminal).

If you are driving or cycling, go straight down the Tsuchiura-Gakuen Road towards Tsuchiura. After passing the Hanamuro Intersection  going for a couple of Kms. You will come to a big Love Hotel ( Hotel LePass) on the right. At the second or third intersection after the hotel, turn left. go straight until you hit the next main ( but narrow) road. The Fujisawa`s home is along that road. In this season you cant miss it with ll the roses blooming along the road itself. You can also keep an eye out for the giant zelkova tree (keyaki) which grows next to their house.

Another landmark which will help you get there is the OMI CLINIC (大見クリニック) which is a private hostipal just near the rose garden. Here is a map to the clinic:

For those who don`t read Japanese, the main road on the map is the Tsuchiura Gakuen Line. The garden would be right where the red frame in that map is.- just above the clinic.

Besides the roses take a peek  through the gate in front the Fujisawa`s old house. You can see a giant Bonsai ( is that an oxymoron?) which was originally a  parth of a tree which had belonged to the wife of General Nogi Maresuke (who was born in Tsuchiura). 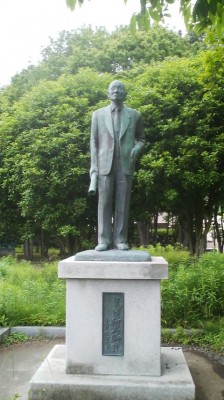 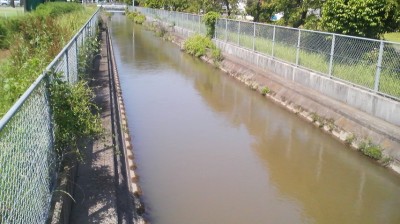 A segment of the the system of irrigation canals which carry water from Lake Kasumigaura to what is now Tsukuba City (taken in Namiki, Tsukuba) 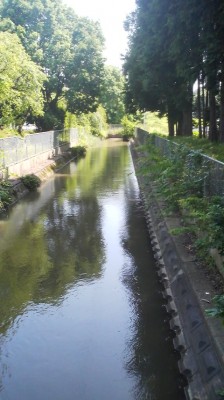 And if you are interested, I once wrote a song, together with Ascelin Gordon and Brett Johnson on the theme of taking time to stop and smell the roses.

I recorded it with the TenGooz, and you can listen to it here: 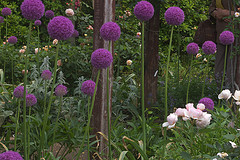 Ironically, my favorite flowers at the rose garden are these GIGANTIAM ( Photo by Tomoko Seto) 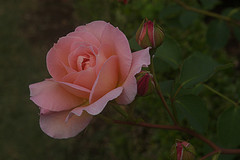 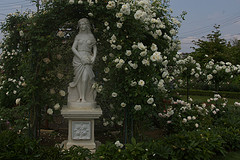 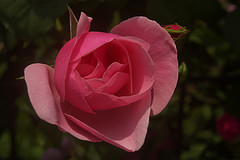 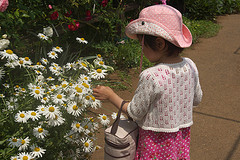 Its not all a bed of roses at the Fujisawa`s garden- there are some daisies, too ! (photo by Tomoko Seto) 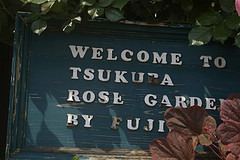 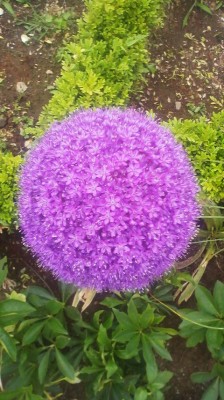 A GIGANTIUM from straight above 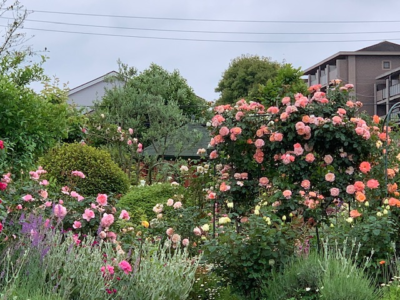