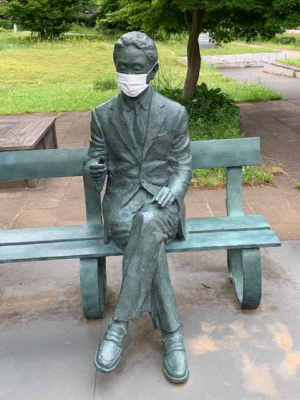 A pleasant surprise during the monotony of corona-lockdown – finding that someone had put this face-mask on a statue Nobel laureate and former Tsukuba University president Leona (Leo) Esaki.

More than in most countries, or so it seems to me, people here in Japan show an interest in the Nobel Prize and take special pride in their own laureates. And today, I saw evidence of one Japanese Nobelist with deep connections to Tsukuba, being treating with the same reverence traditionally bestowed upon Buddhist Jizo statues, which are often given caps or even cloaks to “protect” them from winter cold and other elements.

Trying to stay fit under the corona-lock down, I try to walk or cycle (keeping socially distanced, of course!) for a couple of hours every day. Today`s cycling course took me past Tsukuba`s Chuo Park, located just north of the TX Terminal Station. As I approached it, memories flooded my head… scenes of the annual May Day events, the monthly Tsuku-Ichi markets, feeding carp or ducks at the pond, or some of the many events held there that I`ve written about right here in these pages… it was all so dizzying I felt I had to sit down.

Well, by the benches on the parks southern edge, there are some statues – a large owl, Tsukuba`s mascot , and then three life-sized bronzes of the revered Nobel laureates connected with the Tsukuba Science City – Leo Esaki, Makoto Kobayashi, and Shinichiro Tomonaga. Pushing my bike, I headed towards a comfortable looking spot and approached the Esaki statue from behind. White string stood out boldly as they curved around his greenish bronze ears…. “What`s this?” I thought… and coming round him to get a frontal view, I stopped in my tracks and chuckled. Dr. Esaki had been fitted with a face-mask to keep him safe from the virus!

Now you might say that the mask was put there as a prank, a comment on these dark times… or for no special reason at all, a whim – and you might be right. For me, though, the act is a classic example of how in traditional Japanese culture, non-living objects are sometimes given care or symbolic offerings – as if they were living or had sensation. The most accessible example of this for the foreign tourist can be found in the woolen caps placed on the Jizo statues in winter (as I had mentioned above, with a link to photos). Those familiar with the Japanese children`s story KASA JIZO will have a better understanding of the “theology” behind such an act. In it, a poor peasant feels sorry for a stone Jizo statue standing out in the freezing cold and gives it his own straw coat to keep it warm. By the end of the story we find that the merit of that good deed has brought the peasant and his wife great good fortune. 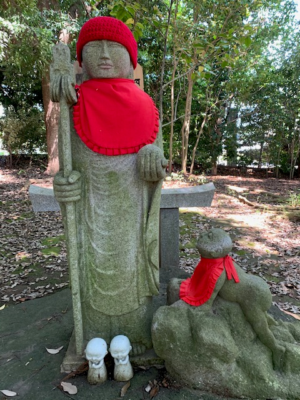 Jizo at the Anpukuji Temple in Tsukuba

Visitors to the Yasukuni Shrine in Tokyo will also be interested in the cans of dog-food left by worshippers in front of the statue of “The War Dog” and the piles of carrots left by “The War Horse” statue.

One of the most impressive stories I`ve read regarding such sympathy for non-living objects in Japan, I came across in a history of the Joban train-line. In it there was one paragraph that described how the local Ibaraki farmers, feeling sorry for the steaming locomotives, would stand by the tracks and toss water at them (like people on the roadside handing out cups of water to over-heated marathon runners) thinking that they would “feel better” if cooled down. 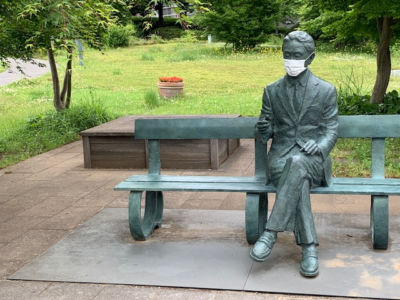 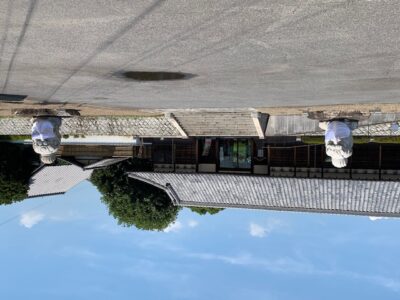 The Guardian-Heads of the Sansuitei Restaurant in Tsukuba get some masks, too – EXTRA-LARGE! 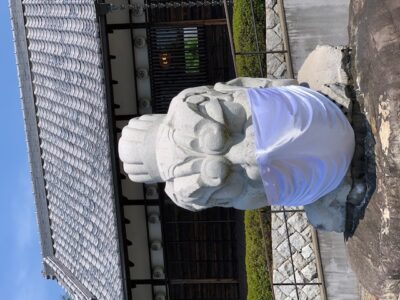