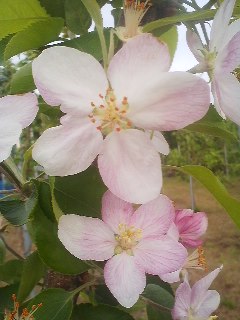 Apple blossoms in Tsukuba (in May)

When you think of apple trees, you naturally think of the fruit for which they are cultivated – not their blossoms. And when you think about apple cultivation in Japan, you think of the country`s colder regions- Hokkaido and Aomori in the north, and Nagano up in the mountains,  not Tsukuba or the moderately climed southern Ibaraki in which it is located.

This past weekend though, on my bicycle and thinking of nothing in particular  but of enjoying the warm and fragrant spring air and all the different shades of fresh greenery shooting forth around me, I came upon one of those many surprising chance encounters which  get me to stop in my tracks – or in this case bring my bike to a screeching stop- an apple orchard, abloom with its five-petalled pink-white blossoms pulsating in the breeze- right here in Tsukuba! 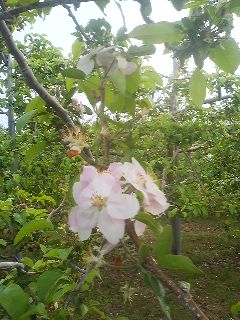 May apple blossoms in Onogawa, Tsukuba

Having been born and raised in New York- the Big Apple (like Aomori Prefecture in northern Honshu New York State is a major apple production region and New York City a major market for the growers), apples have long been my favorite fruit. I remember as a child having a poster on the wall of my bedroom showing all the major varieties- and how my best friend`s mom would always call my mother to complain about how I`d eaten all the apples in their refrigerator.

Coming to Japan can be a shock for apple lovers. The first thing to astound is the fact that Japanese are so big, beautiful and delicious- often packed with pockets of nectar which are called MITSU in Japanese. One must  develop patience, however, since Japanese apples are not bitten into whole- they are always peeled and cut up, often served with delicated little forks or tooth picks (apple-growers here use a kind of protective wax coating on apples which makes the skins inedible unless you wash them with hot water and soap).

The second shock comes from the price tags- 4 or 5 dollars a piece! – though I have seen them even more pricey in countries like Taiwan which IMPORT Japanese apples as gourmet items and luxury gifts. 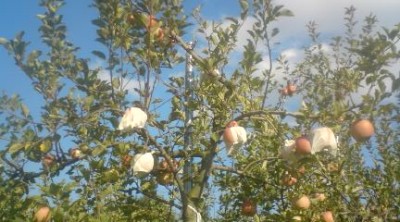 One reason that apples here are so expensive is the amount of care that goes into each individual fruit- they are often individually wrapped in special paper while still on the tree. That`s the best way to keep out the pests (especially caterpillars) which want to get at the apples even more than you do.

While the oldest extant examples of the characters for RINGO (林檎), as apples are called in Japanese, date back back to the 13th century (the mid- Kamakura Period), what was being refered to was a tiny native variety.

During the Edo Period (1600-1868) RINGO were widely cultivated, though these were a variety of Chinese apple

It was not until the Meiji Period (1868-1912), when Japan opened up to the world after centuries of seclusion that western apples that had imported from Europe and the US were introduced and improved upon in Japan by dilligent fruit breeders. 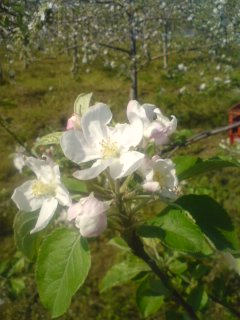 Though southern Ibaraki Prefecture is NOT a  major Japanese apple growing regions, apples have been grown in this area for at least 100 years.

One of the reasons that coming across an apple orchard in Tsukuba was so exciting for me was that there was a whole chapter in a book I have translated* which centers on apples in Ibaraki. Its the true story of a Japanese family that had gone off to live in Siberia in 1920. Here is an excerpt.

I`m not sure exactly how many it was, but a few days into her fever , Mother, still delirious, started moaning, “ An apple! I want an apple! ”

Back in Anju ( in what is now Miho-Mura on the shores of Lake Kasumigaura), Grandpa Genjiro had once brought home a single apple. He had bought it in the far-off village of Edo-Saki and when he got back home he showed it to everyone. “This is the most delicious fruit in the world,” he proclaimed. “You can eat the skin and even the core!” He then went and placed it as an offering on the Buddhist altar.

I stared and stared at that apple for days, going almost out of my mind wondering what it tasted like. But in the end, Grandpa didn`t let anyone try it- he ate it all by himself! It was maddening. After that I kept dropping hints at Mother like, “Boy, I sure would like to try an apple! It would be real nice it we bought one!” But she never did. It was not until she got that fever in Siberia that I realized that all along she had been affected by Grandpa`s apple in the same way that I had been.

Burning up and delirious with fever she kept saying it over and over: “I want an apple! Give me an apple!”

I decided that the only way that I would be able to get one for her would be to write a letter to her family back in Anju.

Since I had no writing materials, I went over the Okuyama`s pharmacy, which was attached to their clinic, and asked Mr. Okuyama if I could have some of the paper used for wrapping powdered medicines.

“I have to write a letter.” I explained.

I got two sheets of paper- which I took over to a desk and in pencil wrote:

Mother is ill. She says she wants to eat an apple. Please go to Edosaki and buy one for her. Then send it here.

I turned around and noticed that Mr. Okuyama was standing behind me. He had been reading over my shoulder. Tears were streaming down his face.

“You`d better not send that letter,” he said. “You shouldn`t worry your grandparent- and there is no way for them to send an apple here anyway. I`ll find one for you.”

After Mr. Okuyama made this promise to me, he left home- and did not come for three days. When he finally returned, it was just around noon. After removing his snow-covered clothes he came over to me and pulled a gray wool ouch out of his pocket. He then handed it to me.

“This is all I could get my hands on,” he said.

Opening the pouch I discovered two small apples. Katya placed them on a dish which she set besides Mother`s pillow. In the end, though, she couldn`t eat them.

And that`s why I found it special to run into some Ibaraki apples. 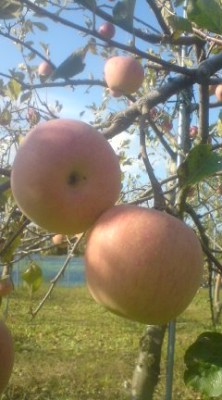 You can find the same apple orchard I came across just to the west of the Onogawa Community Center. 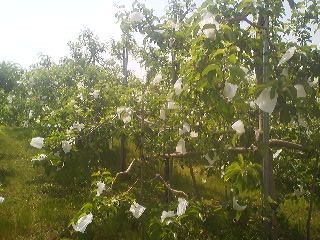 The still tiny apples are individually covered with special wrappers to protect them from pests.