FUKI (the stems of Japanese butterbur) is in season in May – you`ll find them in bento lunch-boxes and perhaps even at your doorstep! 17 May, 2020 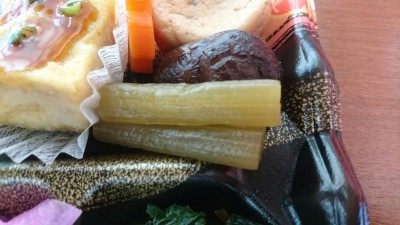 May is an amazing month in Japan. All the browns, grays and straw-colors of the preceding few months suddenly burst into life in a million shades of green which dance in the breeze. Traditionally, the Japanese have called this time of year SHO-MAN (小満－small fullness）which I guess expresses the fact that world is just beginning to fill up with summer abundance. 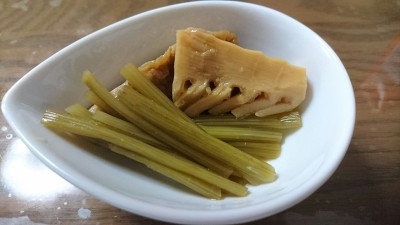 Interestingly, though, there are not that many representative fruits or vegetables of this season. And if you ask a Japanese friend what`s Shoon (旬- in season) in May, the first thing they are likely to mention is a slightly bitter tasting stem which might look to those unfamiliar with it, like pieces of boiled celery: FUKI (蕗) – Japanese butterbur. 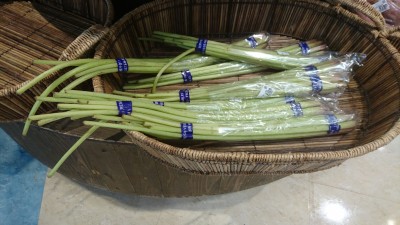 Fuki stems on sale at a Tsukuba supermarket in May.

But since seasonality is an essential component of Japanese culture in general and Japanese food culture in particular, you will  almost certainly be exposed to fuki at this time of year. At  Japanese restaurants, in a seasonal lunch-boxes you can get at a supermarkets or convenience stores or perhaps like me, as bundles of raw stems, given to me by friends and neighbors who have Japanese butterbur growing in their gardens (where it is apt to quickly spread!). 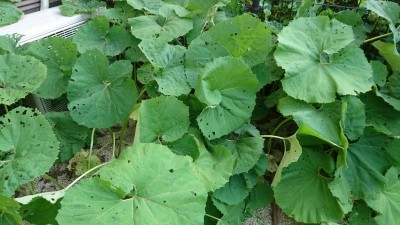 Japanese butterbur (fuki) growing in my neighbors garden in May.

If you happen to receive a bundle or two of these green stems, you might wonder what you can do with them. Well, boiling them in soy sauce (and other seasonings) in the most common way of cooking them up, but before you actually cook them, you have to remove the AKU (灰汁)-the bitterness in their skin, You can do that by first cutting them into short pieces, rolling them in some salt on a cutting board and them boiling for about 30 seconds. Then put the pieces in cold water and peel. After that you can cook them as you like! 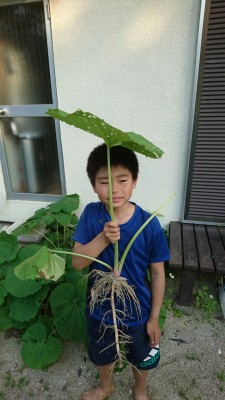 One of the neighborhood kids shading under a fuki (Japanese butterbur) leaf.

The first written record of fuki being a part of Japanese cuisine dates back to the year 750 (back when Nara was the Capital of Japan. Later, the part of Japan which is now called Akita Prefecture (in the northeast on the Japan sea-side of Honshu, Japan`s largest island). The fuki grown there is much thicker in stem and larger in leaf than the fuki that you`ll find growing in other parts of Japan.In fact, the lyrics to a traditional song called the Akita Onto proclaim that: “When it rains here In the Land of Akita, we don`t need an umbrella! ” I guess the butterbur plants served that purpose just fine. 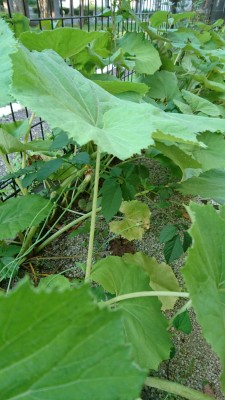 Fuki in my neighbors garden

Today fuki is cultivated throughout Japan with Aichi and Gunma Prefectures being the biggest producers (Aichi now sells more than 10 times more fuki than does Akita). Traditionally believed to help stop and prevent coughing (though I wouldn`t recommend relying on it to do that), fuki contains plenty of minerals and dietary fiber. Most importantly though, it gives us a sense of the season. So while we are still in May, savor your fuki. And if you have it growing in your garden – remember: only eat the stems (after removing the skin). Not the leaves! 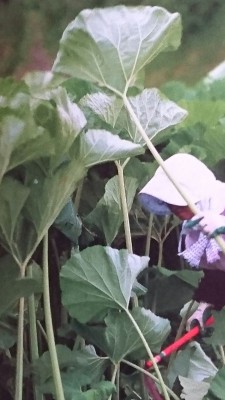