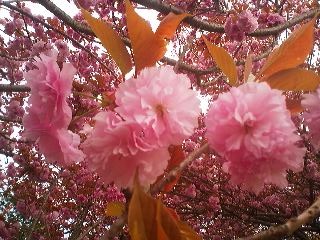 In usual years they bloom a week or two after the most common variety of cherry blossom- the SOMEI YOSHINO- has fallen away, long after all the HANAMI (cherry-viewing party) revelry has ended and everyone is all tired out with what the Japanese call HANA TSUKARE- Cherry blossom exhaustion! 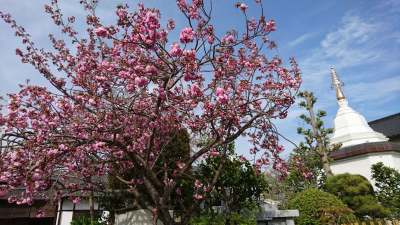 Yaezakura in full-bloom at the Bussho ji temple in Arakawaoki. April, 11, 2020) This Jodo Shinshu Temple is interesting in that it has a Burmese style pagoda containing photos and memorabilia of the Imphal Campaign of 1944 in which there nearly 55,000 Japanese and 13,000 British and Indian casualties. 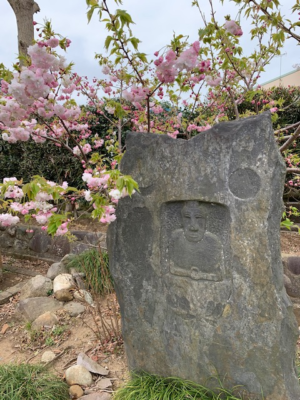 Yaezakura blooming by one of this area`s mysterious “Large-nosed Dainichi” stones. This one stands on the grounds of the venerable Hannya ji Temple in Tsuchiura. April 17, 2020

They are the various varieties of DOUBLE-FLOWERED* CHERRIES which as a group are called YAEZAKURA (EIGHT-LAYERED CHERRY BLOSSOMS) and which look much larger and heavier than their dainty and delicate, yet more celebrated relatives. 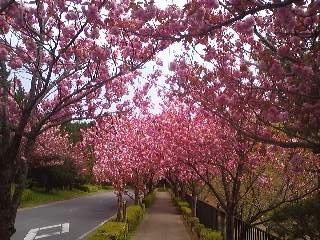 It is these large YAEZAKURA blossoms that are used to make the celebratory SAKURA YU (桜湯) tea which is served at weddings. I have explained how to salt the YAEZAKURA for making this beverage (and for other uses as well), in a previous TSUKUBLOG post:

How to Make Salted Cherry-blossoms

which I render as:

The rays of sunlight 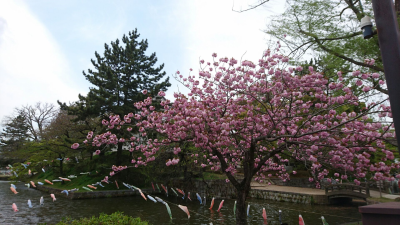 I would like to emphasize the fact that YAEZAKURA is NOT a variety of cherry tree- it is a type of double flowered cherry of which there are several varieties, including KANZAN, YAEBENI SHIDARE, and the above mentioned FUGENZOH.