The Omonoi “Weeping” Cherry Tree in Bloom (面野井の枝垂れ桜) by the grave of Tokusaburo Takaya 4 April, 2020 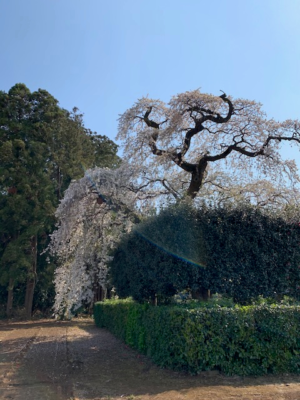 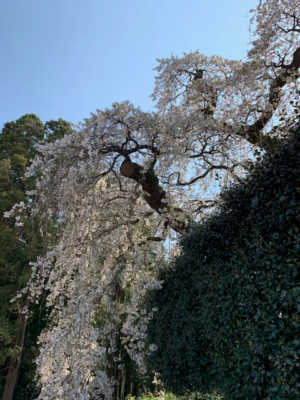 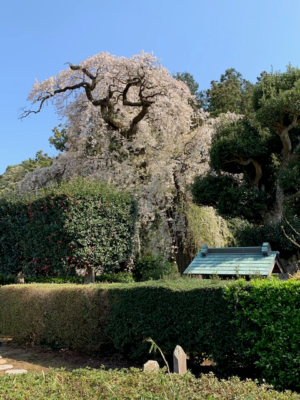 This impressive tree ( a mix of two varieties (EDO HIGAN SHIDAREH ZAKURA and YAMAZAKURA) grows in a graveyard which belongs to the Takaya family. If you peek over the hedges, you can see the grave of Tokusaburo Takaya (高谷篤三郎) a fervent supporter of the “Revere the emperor, expel the barbarians” movement, who in 1865 was tortured to death (by upside-down crucifixion) in what is now Fukui Prefecture) for his participation in the Tengu-to Rebellion. He was 21 years old.

And for those of you interested in the Tengu Uprising, there is another grave, on the other side of Tsukuba (Kurihara, map here) in which the remains of 19 Tengu Faction  fanatics are interred. They were cut down by samurai of the Tsuchiura Domain and the local peasants on the 9th day of the ninth month (according to the old calendar, which would make it some time in October)1864. 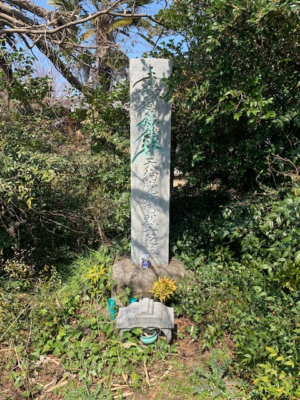 The Tengu Tsuka (天狗塚）Tengu-mound in Kurihara, Tsukuba, under which lay the remains of 19 Tengu Faction stragglers cut down by samurai of the Tsuchiura domain in 1864. 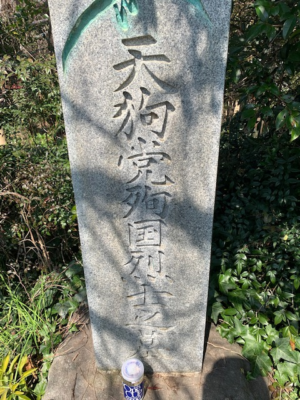 After having been defeated in a battle with pro-shogunate forces on the 8th day of the 9th month 1864 (sometime in October according to today`s calendar), one group of Tengu Faction survivors headed towards the territory of the Tsuchiura domain (parts of which now belong to Tsukuba City). They were carrying firearms, as well as swords. Unfortunately for them though, the small boat they tried to cross the Sakura River with (at what is now Kurihara, Tsukuba) capsized, soaking their gunpowder and rifles and rendering them useless. The local farmers were also ready for them and had armed themselves with bamboo spears, etc. and had set up all sorts of barriers to prevent the “Tengu” from entering their homes. When the radicals actually showed up, the farmers apparently all turned chicken and ran to hide inside their homes (a few of which the rebels set on fire). Lucky for them, though, 4 or 5 mounted samurai appeared on the scene, followed by foot soldiers. they succeeded in shooting two Tengu men, killing one instantly, and injuring the other. Incapacitated, the wounded man tried to fight off the peasants (who had by then regained their courage) and eventually threw his sword at them leaving him completely defenseless. The farmers finished him off with their spears. The samurai took care of the rest of the rebels – while another kiiled himself in a nearby bamboo grove.

There is also a stone monument at the Fumon ji Temple in Kangori, Tsukuba, commemorating the fact that members of the Tengu Faction had taken shelter at the temple.