The Connection Between the Sakura River (桜川) in Tsukuba and Sakura (Cherry Trees) Traced to its Source- the SOURCE OF THE RIVER ITSELF! (again) 5 April, 2020 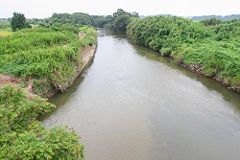 The Sakura-Gawa River as it is seen running through Tsukuba

It certainly cannot be called mighty or majestic, and there are few points along its 63.4 km course which could in any way be called scenic. Still, The Sakuragawa (Sakura River), which flows through Tsukuba City after it winds its way down just west of Mt. Tsukuba on its way to lake Kasumigaura,  gushes with historical and cultural significance, much of which is reflected in the river`s name- which can be translated directly as The Cherry Tree River, and by association as The Cherry Blossom River. Now for anyone who has actually seen The Sakuragawa`s Tsukuba segment, this moniker might seem strangely inappropriate, as there are NO SAKURA TREES along its banks in these parts. In fact, even the now famous cherry blossom spots along The Tsuchiura City portion of the river, the last few kilometers before it runs into the lake, were first created in the early 20th century with the planting of hundreds of sakura of the SOMEI YOSHINO variety, a hybrid which is now the most commonly seen cherry tree in Japan (some say 80% of Japan`s sakura are this variety). For this reason, residents of or visitors to Tsuchiura and Tsukuba haved  asked- Why is it called the SAKURA-gawa even if there are no sakura (cherry trees)? 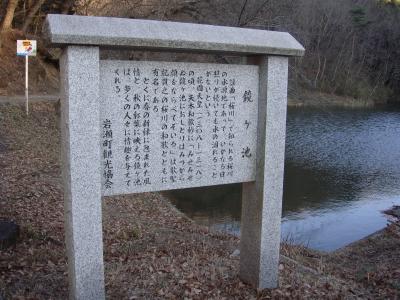 Kagami ga Ike, the source of The Sakura River

What IS the connection between this river and cherry trees? Well, to answer that question we have to head to the source – the source of the river itself- up north of Mt. Tsukuba to a town called Iwase, which has recently merged with other towns to become what is now know as Sakuragawa-City. It is there that we can find the kagami ga Ike  (鏡ヶ池), a now undistinguished pond, out of which The Sakura flows. It is in this vicinity, however, around the venerable Isobe-Inamura Jinja Shrine, that since ancient times many fabulous wild sakura trees have bloomed. These YAMAZAKURA, the wild cherries which bloom white blossoms AFTER bearing leaves (in contrast to todays SOMEI YOSHINO variety which blossom pink BEFORE sprouting leaves), were so renowned during the Heian period, that there was actually a saying:  NISHI NO YOSHINO- HIGASHI NO SAKURAGAWA! (As for Sakura) In the West there is Yoshino and in the East there is the Sakura River( Yes, OUR Sakura River!).

In fact, KI NO TSURAYUKI (872-945), considered  one of the immortals of Japanese poetry, wrote a poem about  the Sakura River, down which the fallen cherry blossoms he imagined were carried in its stream (the poet probably never actually visited this area). The tanka poem, which is included in the Gosen Wakashu Anthology, reads: TSUNE YORI MO HARU BENI NAREBA SAKURAGAWA-NAMI NO HANA MANAKU YOSURAME (常よりも 春辺になれば 櫻川 波の花こそ 間なく寄すらめ）. I translate this provisionally as- More than usual, in the midst of spring,on the Sakura River, there is an unbroken carpet of  flowing cherry-blossom petals 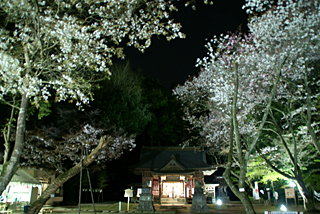 Sakura by night at the Isobe Inamura Shrine

You might be even more surprised to learn that Zeami, the theatrical genius who brought the sublime art of Noh drama to its greatest heights, wrote a play entitled SAKURAGAWA which is set at the Isobe Inamura Shrine and uses the above mentioned poem and its imagery of a river of floating petals as a key motif (for a synopsis see www.jstor.org/pss/2384884 ). In 1924, the area around the shrine was declared an official famous cherry spot and in 1974 , eleven of the varieties of wild cherry found there were declared National Monuments.

(I have written more about these trees here)

Since these wild species bloom later than the ubiquitous SOMEI YOSHINO, you still have a chance to enjoy a more AUTHENTIC hanami in Iwase, Sakuragawa-City. These were the types of trees traditionally celebrated with HANAMI and poetry etc. To tell the truth, there is still alot more to tell about the Sakura River, but I will leave that for further articles.

Anyway, I am sure that after reading this, there will be no more scoffing the next time you cross The Sakura River. It IS majestic in a way. Oh, just one more thing about the Isobe-Inamura Shrine, which is about a 45 minute drive north from central Tsukuba. Within its precincts lies a stone which is said to be the TAIL OF THE CATFISH whose head protrudes from the ground at the Kashima Grand Shrine ( Ibaraki`s most important shrine). This catfish is believed to cause earthquakes if it thrashes around, and thus by pacifying it, seismic disasters are prevented. These stones are known as KANAME ISHI.