Swallows (tsubame,燕) No Longer Get the Hospitality They Had Long Been Accustomed to in Japan 29 April, 2020 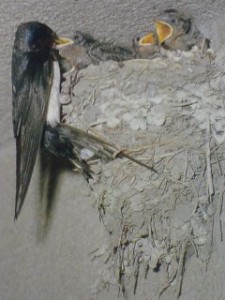 Though  we are now entering  the height of their breeding season, it is not until July that they really stand out. It is then that they  can be seen darting about, like little fighter planes, over the ripening paddy fields, gracefully grabbing up mosquitoes and other harmful bugs. They are working at a frenzied pace, as their young ( their second brood of the season), numbering as many as seven, are getting bigger and bigger, and need more and more nourishment before they finally leave the nest and find food on their own. And while they have a professional baseball team named after them and a shinkansen train as well, SWALLOWS, or TSUBAME (燕), are not getting the respect they have grown used to.

These famed harbingers of spring arrive in the Kanto area in April, having flown great distances from southern China,and as far as Indonesia, and Papua New Guinea. They arrive just in time to make use of the freshly tilled mud in the paddy fields to make their distinctive nests.  In Japan, swallows have come to live closely with humans, mostly nesting in settled areas, including large cities. They make their mud and grass nests under the eaves of houses and shops and usually return to the SAME HOUSE every year, OFTEN ON THE SAME DATE! The annual return of the tsubame has been considered a happy occasion by their host families. Having your house or shop selected by the swallows for nesting has traditionally been considered highly auspicious and you can still find home-owners and shop-keepers putting out boxes or newspapers to catch the droppings and maybe even putting up a screen or wind-shield for additional protection. In late May, while the swallows are raising their first brood it is most usual to notice these DROPPING BOADS before noticing the birds themselves (if you see a sheet of newspaper or cardboard covered with white droppings just look up and you will probably see the nest!). You can probably be sure that there will also be hungry crows , cats or snakes nearby (that is why the nests are tucked ingeniously into unreachable areas under the eaves). 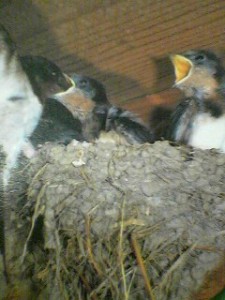 In older villages and towns and in the older sections of large cities, one nest or more under the eaves of an old building, with chicks poking their beaks out expectantly waiting for their mothers return, as their father stands guard close by, is an endearing image of a Japan quickly disappearing. 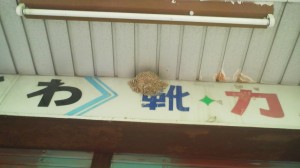 Walking along the old main commercial street in Hojo, Tsukuba it is comforting to find a swallows nest (or two) under the eaves of just about every shop! 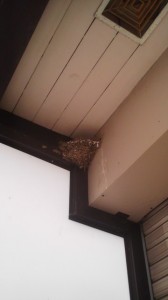 A swallows nest in Hojo, Tsukuba

Look at some ways that Japanese people help the nesting birds (by making platforms for nesting) and protect their homes from swallow poop:

I have also written a TsukuBlog post on my trying to nurse an injured swallow: 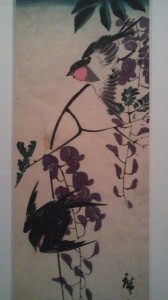