NEGI BO-ZU (葱坊主)- Welsh Onion Flowers Look Like Bald Heads ( either those of monks or those with crew cuts) To The Japanese 11 April, 2020 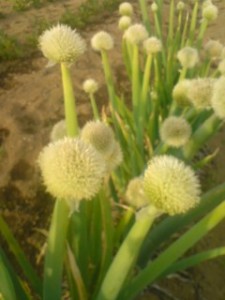 In May, Tsukuba will explode with color. Along with all the shades of fresh greenery emerging everywhere, there will be the brightly hued spring flowers- in the parks, along the roads (azaleas!), in private gardens, and growing wild in every likely and unlikely space.

Still, with all that distraction, my eyes are drawn to the humblest of our vegetable patches, where one of its cheapest and most everday crops is grown – NEGI  (usually referred to as leeks, in English, though they are in fact Welsh Onions). Not only do these vegetables have a most curious ( and delightful) flower, but they also raise in my mind all sorts of cultural and linguistic questions.

It is in April and May that on the tops of  each of these strong smelling, hollow stems (which are an indispensable part of Japanese cuisine AND Japan`s agricultural landscape), that there emerges a  large white bud with a pointy top.

This smooth, roundish shape has  long reminded the Japanese of the shaven heads of Buddhist monks. And since monks had commonly come to be called Bo-zu ( 坊主) during the Edo Period (1600-1868), these NEGI FLOWERS were referred to as NEGI BO-ZU- in other words NEGI-MONKS.

And because it had until recently been customary to keep their heads closely cropped, to this day, LITTLE BOYS are also commonly referred to in Japan as BO-ZU. 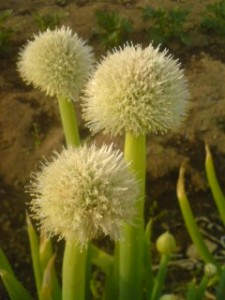 For that reason, the blooming of the welsh onion flowers (which are a Haiku Kigo for spring) can evoke in some, memories of their children, or of their own childhoods.

In fact the word BO-ZU in Japanese can be used to refer to any totally bald head. The action of shaving ones head ( for any reason) can be expressed as BO-ZU ni suru- literally, to do oneself like a monk. 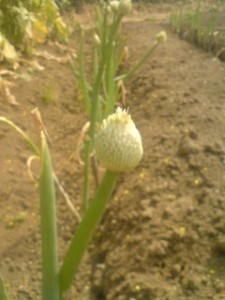 The Bud of a welsh onion flower

For me, however, the connection between these flowers and bald heads seems to be way off the mark. This is because as soon as the buds burst open, the flowers appear  to me more like A FULL HEAD OF HAIR- a big afro, in fact, than a smoothly shaven head.

The negi flowers can also be said to resemble the large heads formed by fluffy dandelion seeds. In fact if you show of picture of negi bo-zu to kids they will almost surely mistake them for the loveable TAMPOPO ( dandelion in Japanese). 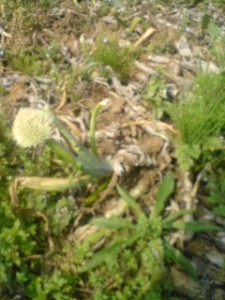 Another question brought to mind when gazing at these flowers, and especially their buds, is their relation to GIBOSHI ( 擬宝珠), which are important  traditional decorative elements, especially found on bridges at shrines and temples.  Because of these metalic or wooden mountings` similarity in shape to the buds of the NEGI-BO-ZU, they are sometimes referred to as SO-DAI ( 葱台, literally welsh onion stands).

What must be asked then is: Are the giboshi in fact modelled after the buds of the negi flower, and if so, why? 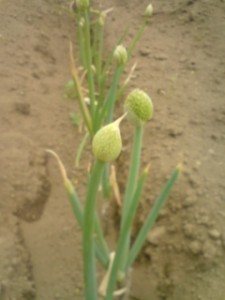 My instincts tell me that since this motif originated in China, where along with Japan, negi has long been believed to have the power to DRIVE AWAY EVIL or BAD LUCK ( in Japanese MA-YOKE, 魔よけ), it is only natural that they be placed on bridges and at entranceways to keep the unwanted out and to help ensure safety. It is also natural that when envisioning the use of the Negi as a motif , that the beautiful and distinctive shape of the buds were decided upon as a symbolic representation of the stems, which are in fact the strong-smelling part of the plant used for MA-YOKE. 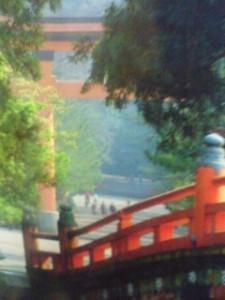 As with other questions of ORIGINS in Japanese culture, things are never so simple and clear-cut . Looking further into the history of the GIBOSHI, I have found that the earliest examples found in Japan ( on a bridge in the old capital Heijo-Kyo, in Nara Prefecture) were much smaller, flatter, and less pointy. Many GIBOSHI seen today are also flatter and less reminiscent of the negi flower buds ( for example the one on top of the BUDOKAN in Tokyo).

The reason for this is that originally there was probably another source for the shape of the giboshi- the HO-JU (寶珠), treasure gems with short pointy tops held in the hand by some Buddha statues. These jewels were also believed to keep evil and disaster away, and also curiously, to cleanse dirty water.

Was the shape of these magical jewels modelled after the buds of the negi?

We cannot be sure. But anyway, once again we can see an element of Japanese culture with more than one source. The form of the GIBOSHI are surely a combination of the HO-JU treasure gems and the buds of the negi- two similar looking objects which served the same function- to keep misfortune away!

For more pictures of GIBOSHI see: 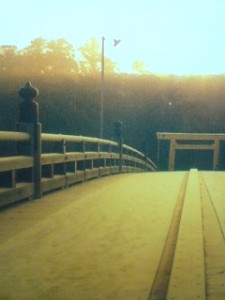 And just one more connection between NEGI and Buddhism. The vegetable seems to have originally been found growing in the mountains of Western China. These mountains mountains have been called SO-REI (葱嶺, literally, the Negi-Peaks).

Since the Buddha himself was believed to have done asceticisms and meditation in these very mountains, the expression SO-REI KYO (葱嶺教), literally, the Religion of The Negi Peaks, has also been used ( rarely, however), to refer to Buddhism.

More important than any of this, however, is that you DO NOT miss these  ever so curious looking and culturally significant flowers. Step out into a nearby vegetable patch and have a good look!

I`ve written more about NEGI as a vegetable and not a flower, here:

and once again, dont forget to read about Tsukuba`s overwhelming FROG CHORUS: 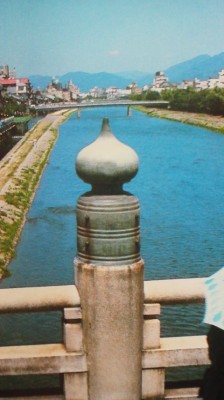