Since the success of the international hit Shall We Dance (1996), Japanese film producers have been 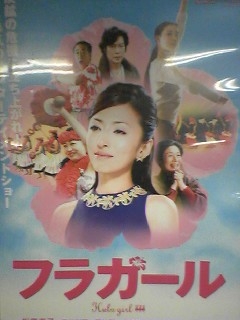 regularly investing in the genre which can be called O-keikomono （お稽古物）. Those of you who are active in martial arts will be familiar with the word keiko, which means training, and the above-mentioned term can be used to refer to stories in which one or more characters begin to practice an activity under the guidance of a teacher, resulting in personal growth for both student and teacher and an obligatory grand finale to display the great skill acquired as a result of the hard training.

I guess you could say that it is an age old Asian genre which has also found success in the West in films ranging from the Karate Kid to Rocky. Such recent Japanese movies as Swing Girls and Water Boys were efforts that used the same plot pattern as Shall We Dance but did not achieve the same results in either critical acclaim or box office success.

In 2006, however, director and writer Sang-il Lee used the old formula to create what I found to be a film that was not only very entertaining, moving, and very well made, but also a work that should be seen by anyone with an interest in the history of this part of Japan.

The story takes place in Iwaki , which is in Fukushima Prefecture just across the border from Ibaraki (our own Prefecture) and most of the dialogue is in a type of stage Fukushima dialect (if they used real dialect general viewers would not understand) which very closely resembles the dialect spoken by natives of rural Tsukuba.

Iwaki and Northern Ibaraki were important coal mining regions and the labor of the miners was essential for Japans industrialization.The shows how these laborers and their families were proud to have made such efforts for their country and which was confirmed for them by the fact that the Emperor had visited
their town and had actually gone into the mine.

Times change however, and the company could not keep on all the miners. In Japan, however, the company is always concerned about its worker s(well, NOT always!) and tried to branch off into another business which would keep the town going. The idea was to utilize geothermal resources around the mine to develop a huge spa resort with a Hawaiian theme. Sounds crazy now and it sounded even crazier then to the hardened miners and their families.

Hula Girls is the story of the miners daughters who through great efforts with the help of an alcoholic, debt-ridden, big city girl teacher to help save the town and turn the Hawaiian resort into a smashing success, which it still is today.

Director Lee makes every frame count right from the start as a hand drawn flyer of Diamondhead blends into the next shot of the coal mountain. The script is funny and intelligent. The performances, which are sometimes campy or over the top, are sometimes quite good or even excellent. The story is formulaic, but surprising, though I don’t want to give anything away. I must add, however that it is one of the greatest feminist films I have ever seen, made in Japan or anywhere else.

Japan is a country of successive fads and the success of this film has created yet another. Hawaiian dance classes sprang up everywhere, a few of them still running today (like the surviving Flamenco dance classes, relics  from the Spanish dance boom created in the wake of the  Barcelona Olympics (when were they?).

As I said, I’m not going to go into the details of the story. Just see it! If you don’t cry, you are made of stone!