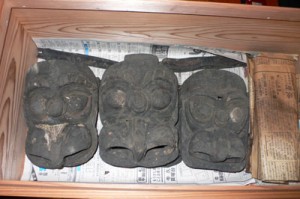 Shortly after leaving Mrs. Noguchi`s 300-year old thatched roof country manor house in the Bo-uchi neighorhood of Kukizaki in Tsukuba City, it began to rain. My friend Rick and I acknowledged the eerie coincidence with bemused grins. However, as the first trickles built up into a feverish downpour which carried on into the next day, I started to compulsively check the weather from my window, sweating and fidgeting with anxiety.

What had we done? We imagined Mrs. Noguchi, 86, sitting home all alone, listening to the rain relentlessly pounding the thatch, watching the waters rise, and deeply regretting her special kindness and hospitality towards us. She probably feared it was happening all over again, because of what she did. You see, she had broken an age-old taboo at at my behest. She had let us open a box which it had been said should not be opened, and in fact had NOT been for many, many years. The box contained the fabled Noguchi Family Noh Masks, which according to legend are magical, possessing the power of bringing on rain. The last time they had been removed from their confinement, it is said that it rained torrentially for days, causing a disastrous flood. The masks had been boxed up and shut away in the Noguchi`s attic ever since.

Much to our relief, the rain eventually spent itself, leaving behind no serious damage (except to my stubborn skepticism!). Now with a guilt-free conscience, I can share with you what we found out about the masks and show you some of the rare photos that Rick took during our visit. What we found on that Sunday, just before the rains, was very different from what we had expected. This we quickly realized was due to the very old and misleading pictures of the masks which had been available in books and online. I hope to set the record straight by presenting a clear picture and explanation of what these masks are, based on a look at Japanese traditions of amagoi (雨乞い, rain supplication ceremonies) and their basis in Shinto and Buddhist lore.

First,however, let me tell you how it all began.

Coincidence and inter-connection are what led us to our special encounter with the masks. I had been perusing an obscure volume on local history and I stumbled upon a curious black and white photo that caught my eye. Three masks which appeared to be the faces of birds or monkeys were printed above the heading of a five-sentence entry entitled “The Noguchi Family`s Masks”.

The text read “Three masks which have been in the Noguchi Family for generations. It is said that they were made by Hidari Jingoro. They used to be lent out to local farmers to be used in rain supplication ceremonies during dry spells and it is believed that they have rain bringing powers. Lord Hosokawa of the Yatabe Clan heard of the masks and used them to call for rain. Their power, however, turned out to be too great as the rains continued for 3 nights and 3 days with ensuing floods. They have not been shown to anyone since.” (Kukizaki History)

Though I had been preoccupied with writing about other topics at that time, I made a mental note that someday in the near future I should try to learn more about these odd-looking, little known, local treasures with such an intriguing story attached to them.

As fate would have it, the next day I had an appointment with Misao Ito, whose mother is an important source of information for me on local folk customs. As we were talking, it came back to me that Misao and her mother lived in Kukizaki and I thought about the masks. I asked if Misao knew about them and the Noguchis. She answered that she certainly did and that Mrs. Noguchi, who lived alone, was her neighbor across the street!

Revved up by the coincidence, I asked Misao if she could introduce me sometime, so that I could do an interview about the masks. She told me that she would. About a week later I got an email. “Mrs Noguchi will be glad to see you and show you the masks ! Lets set a date.” I was walking on air!

Now I had to begin with some preliminary research which in this day and age usually begins with a Google search. Google Japan showed me that the masks were featured on the Tsukuba City website, in the Cultural Heritage Section. The site has a very similar photo and text, though there were a few key differences. The website`s photo showed two additional stick-like objects which were not shown in the book. The website left out any suggestion that the masks were carved by Hidari Jingoro, but said there is possibly a South-East Asian or Southern Island connection to the masks. Google Japan also showed me that the masks were mentioned in a few chat group discussions in Japanese on the origins of Japanese culture. Some participants had seen the old photo online and suggested that the masks showed a connection between Japan and South China or India etc. Nothing turned up in an English search and visits to several libraries led me to nothing new.

Taken aback by this near total lack of information regarding these important pieces of Tsukuba`s heritage, I came to recognize the significance of the upcoming appointment to see the masks and talk to Mrs Noguchi. The night before our meeting I hardly slept.

Rick and I had arranged to meet Misao at a roadside convenience store, and she proceeded to lead us along agricultural roads hardly wider than our vehicles, through rice fields glistening with green, and tall, shady woods. We were entering the Bo-uchi district of Tsukuba and it was as if we had experienced a time slip. Misao stopped her car and pointed out a rare, free standing cluster of zakumata (easy-childbirth supplication sticks) at a fork in the road, and dirt paths framed by weather-worn torii gates led off into darkened sacred groves which concealed small shrines, fox gods and votive stones.

Even in this setting the Noguchi`s house stood out, with its grand thatched roof and 300 year old posts set in front of the family`s wooded hill which was bursting with rainy season shades of green. Mrs. Noguchi was waiting for us with cans of tea. Though she needed a walker to help her get around, she appeared vigorous and even youthful when she took a seat and smiled as her guests admired the interior of her home with mouths agape. Being a residence of former samurai, the walls were adorned with traditional weapons, a large Shinto altar hung high on the wall and in another room we could glimpse a photo of Mrs. Noguchi`s husband, propped up in the Buddhist altar, showing a handsome, bright-eyed, naval officer as he looked just before being killed in the war at the battle of Leyte in the Philippines.

Without wasting much time, Mrs Noguchi asked for the box containing the masks to be brought into the living room, where it was placed on the coffee table. With bated breath and a bit of reverence, I lifted the top off. The room seemed to fill with the musty smell of history. The contents of the box were wrapped in extremely browned newspaper, which to my astonishment were from the Meiji Period (1868-1912)! We gently peeled them away. What we found was quite surprising, though logical. I had seen the old photos of the masks (Mrs. Noguchi did not know when they were taken), and was under the impression that the masks resembled South-east Asian bird or frog masks, and I had wondered about the connection between such masks and Japanese rain supplication ceremonies. The Noguchi Masks, however, were not anything like what the old photos had shown, since those photos had obviously been shot from above, at a very misleading angle. We found what were clearly dragon masks, as the pictures Rick has taken reveal. When taken out of the box, each mask had two main sections, an upper face and a lower jaw. The stick like attachments appeared as if they could be fitted into the masks as horns and whiskers, part of the traditional dragon iconography.

I realized that this fit in perfectly with Japanese rain supplication customs, which often feature dragon-gods or Ryujin, as they are called. This is especially true within the Shingon Sect of Buddhism, which happens to be the sect which most residents of Bo-uchi are affiliated with. According to Shingon legend, a rival sect captured the dragon-god (Ryujin)and held him captive in a jar, which resulted in a severe drought. The great priest Kukai, however, using powerful incantations was able to free the Ryujin and bring back the rain. Thus, many rain supplication ceremonies include a Ryujin or dragon (see http://www.houbien.jp/amagoi/, as an example).

Also, quite fittingly, Mrs. Noguchi told me that her titular shrine (ujigami), was a Suijin (water-god) shrine. This connection to the Suijin is probably the reason that the masks were entrusted to the care of the Noguchi family. It seems natural that the masks used by local farmers for rain supplication would be Ryujin, as this is the god of rain, and that they would be housed in a family whose personal shrine was the water god.

And, by the way, as you can see, the masks were probably not carved by the great Hidari Jingoro, and this type of attribution of local artifacts to legendary artists is not uncommon in Japan, as it lends prestige to ceremonies. The masks appear to have been whittled by local farmers, as they do not show a high degree of artistic merit. The locals, though, revered the masks, using them whenever rain was needed, probably at the Inaoka Kaminari Shrine, which was famous for such ceremonies.

I have checked the records and found that there were terrible floods in this area 1723 and 1848. It was probably after the latter deluge that the masks were shut away.

Well, the rains have cleared up, and I hope that the `MYSTERY’ of the masks has also been.

Special thanks to Misao and her family, and of course to Mrs. Noguchi, who was such a gracious hostess. We enjoyed talking with her and hearing her life story — the most dramatic tale being when sword bearing robbers entered her home and stabbed her in the thigh! I hope to go back and try to get some more information about the masks and promise to keep everyone informed