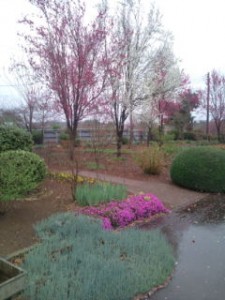 Despite the prolonged winter-like weather, or rather because of it, the spring flowers have been spectacular in Japan, with rarely seen combinations of blossoms which do not normally bloom at the same time – peach, cherry and azalea, for example- arousing excitement at parks, gardens and  even in front and back yards.

With the explosion of color and fresh greenery it is easy to overlook another April blossom, which though humble and quite rustic belongs to one of Japan`s (and Tsukuba`s) most common and important crops- the DAIKON RADISH!

The daikon ( 大根) is an essential part of the Japanese diet YEAR-ROUND in the form of pickles and in soups and stews. Grated,it is also used as a condiment for a variety of dishes such as grilled fish or noodles. 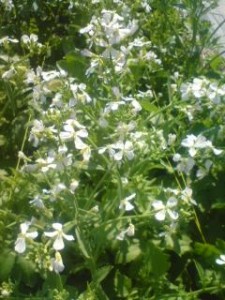 Daikon no Hana ( flowers of the daikon radish) Tsukuba 2010

Despite being eaten throughout the year, the daikon is considered to be a vegetable representative of winter, the season in which it has been traditionally harvested.

Many farmers, however, leave some daikon in the fields over the winter, as they keep very fresh in the cold soil. 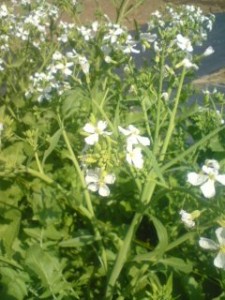 Once they start to flower, either in white or purple cross shaped blossoms, the daikon can no longer be eaten. It will be possible to obtain seeds from them, however,and many farmers also leave them in the fields just to let them bloom. 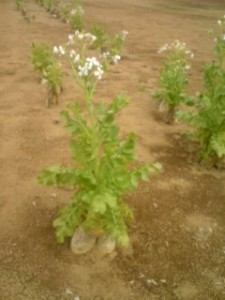 With the important role the daikon has played in the diet and folk customs of the people of Ibaraki, as well as its dominance of the Ibaraki`s AGRISCAPES, I sometimes wonder whether this rustic, yet charming flower should not be the PREFECTURAL FLOWER, instead of the high brow rose. 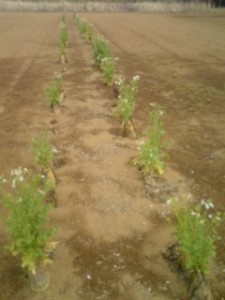 A row of flowering daikon radish in Tsukuba 2010

For more on the Daikon in Japanese culture and history and its special role in Ibaraki Prefecture I have written: