Where are all the REAL PEACH BLOSSOMS (momo no hana, 桃の花) around the time of the PEACH FESTIVAL (momo no sekku, 桃の節句)- another name for the Hina Doll Festival 3 March, 2020 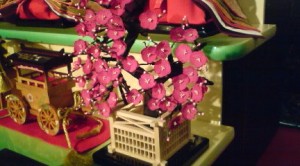 Multi-tiered hina doll sets always feature a little model of a peach tree in bloom – in celebration of the season. The only problem is that peach trees don`t bloom in early March.

Today, March 3rd, right in the very heart of the PLUM BLOSSOM season, we celebrate the Hina Matsuri (the Girls’ Day Hina Doll Festival), otherwise known as MOMO NO SEKKU (桃の節句), the PEACH FESTIVAL. And though you might recognize the purple petalled little peach tree replicas in the full Hina Doll sets, you might wonder where the REAL peach blossoms can be seen today. The answer is… that, outdoors, you can’t! (Practitioners of Ikebana flower arrangement, however, can get special blooming peach branches at flower shops). For the real thing, you will have to wait a few more weeks. 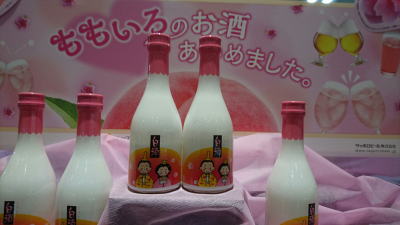 Why then is the Peach Festival on March 3rd? Well, that’s what happens when you CHANGE THE CALENDAR, as the Japanese did back in 1873, after having used the Chinese lunar calendar for about 1200 years. The Hina Matsuri festival should be celebrated on the 3rd day of the 3rd month, which with the old calendar (kyureki) was always about one month later than March 3rd (this year- 2018 – it will be April 7), when the peach Blossoms ACTUALLY DO bloom. And while some people in certain regions do continue to celebrate the Doll Festival according to the KYUREKI (old calendar), now most Japanese do so on the 3rd day of the NEW 3rd month, which is March.

In ancient China, it was on the first Day of the Snake of the third month (each day of the month is designated a different animal of the Chinese zodiac), that a special seasonal marker (sekku, in Japanese) was observed. It was a day of spiritual cleansing involving the performance of ritual ablutions in rivers. In China, the peach is considered a powerful vessel of YANG ( 陽, pronounced YOH in Japanese), as opposed to YIN (陰, IN), because its tree bears numerous, brightly colored fruits. These were believe to be effective in fighting THE DARK SIDE ( which is the YIN), and the wood of the peach tree was an essential ingredient for exorcisms, purification rites and the battling of demons. That is why the peach, which bloomed in the 3rd lunar month (when the ancient ablutions were held), became so strongly connected with this day (in Heian Japan small human figurines HITOGATA were rubbed against the body and cast off into rivers or the sea).

Many mistakenly assume the peaches in the Hina Doll sets and the name of the festival itself (momo no sekku) to be symbols of femininity for Girls’ Day. Their presence , however, can be traced back to this notion of the peach tree and its fruit tree’s being useful use in driving away evil. The concept of the peach’s evil fighting powers has left other traces in Japanese culture. The great DEMON DEFEATING HERO- MOMO TARO (little peach boy), is one of the best known figures in Japanese folklore (until reading this, Westerners probably felt  it was strange that a male heroic figure was called peach boy!). Now you know why! Have a Happy Hina Matsuri!

I have written about the Peach Festival in Koga, Ibaraki, in which you can enjoy thousands of REAL peach trees in bloom every spring HERE