To Eat the Leaf or Not to Eat the Leaf, That is the Question – when eating Sakura mochi (桜餅) and Do-myou-ji (道明寺) in March, and Kashiwamochi (柏餅) in May 11 March, 2020 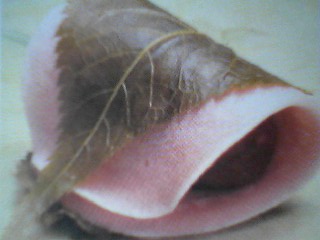 Sakura mochi is available from March 3rd thu the end of the month (it is not eaten while the Sakura (cherry trees) are blooming. It is wrapped in an edible salted cherry leaf

Eating sweets sounds like a simple pleasure. And though partaking of wagashi (和菓子), or traditional Japanese snack is certainly enjoyable, it is a far from simple field.

Though the blooming of the cherry blossoms (sakura no hana) is still a few weeks off,   sakura-mochi (桜餅), cherry blossom rice cakes, are eaten NOW – and not in the HANAMI (blossom-viewing) season!

I learned about this several years ago while on my way to a HANAMI party ( held under the blooming cherry trees). Since I had enjoyed sakura mochi with Japanese friends and colleagues several times BEFORE the cherry blossom front had reached Tsukuba, I thought it would be an appropriate sweet for  celebrating  under the full-blooming trees.

I was surprised, however, when the woman behind the counter told me that the season for sakura-mochi had already passed with the month of March. She explained that sakura-mochi was eaten from the day of the Doll Festival on March 3rd (because of its being a pretty pink), through the end of the month. I was able to confirm this later by going to around to all the wagashi shops I knew of in Tsukuba. At each one, it was the same story. Sorry,no sakura-mochi.

Sakura-mochi is a flattened piece of pounded rice, dyed pink, which is filled with sweet bean paste, rolled into a crepe, and then partially wrapped with a salted cherry leaf. It was invented in the early 19th century by a wagashi shop (Yamamoto-Ya), still located along the banks of the Sumida River. They became the craze of old Edo,  and then spread throughout the land, eventually becoming an iconic spring sweet.

In the Kansai region (Kyoto, Osaka…) however, confectioners had their own take on the idea and while still using the salted cherry leaf and sweet beat paste, they used a different type of dough (one in which the individual grains of rice remained recognizable) and gave the cakes a different shape, something very close to a ball. It was also given a different name: do-myo-ji (道明寺). 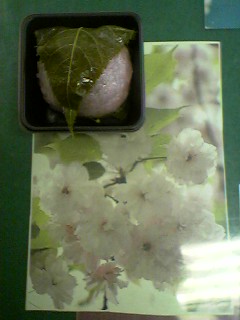 If you are offered these traditional sweets (or buy them yourself) the inevitable question arises: Do you eat the leaf or not? Well, the leaf is edible and in my opinion delicious. However, it’s a matter of personal taste. In this area most people eat the leaf, though it seems that in Kyoto many people just savor the leaf’s aroma.

One more point to remember. Do not confuse sakura-mochi or domyoji with May’s sweet kashiwa-mochi(柏餅). This is a similar sweet-bean filled rice cake wrapped with the leaf of a Japanese oak. It is associated with Childrens Day (May 5), because these leaves do not fall from the tree until the tree starts budding, which for the Japanese symbolizes a harmonious flow from one generation to the next. 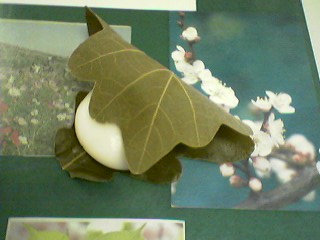 Kashiwa mochi (eaten in May) is wrapped in INEDIBLE oak leaves

When eating Kashiwa-mochi you should DEFINITELY NOT EAT THE LEAF, as it is not edible. There is a story I heard that the Showa Emperor, having been educated to never leave anything on his plate, once upset his stomach by not following that rule.

If you`d like to try these traditional Japanese sweets, remember, they are only available in specific seasons! So don`t wait until the Sakura start blooming to enjoy your sakura mochi. NOW is your only chance!