The Sacred Daidai kagura Dances at the Sekimoto Shrine in Sekijo, Ibaraki (関本神社の太々神楽) – for more than 200 years, every year on March 3rd and November 23rd 2 March, 2020 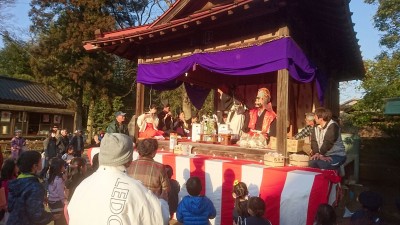 Crowds gather around the small outdoor stage as the last of 8 kagura dances are performed at the Sekimoto Jinja Shrine in Sekijo, Chikusei City – ten minutes by taxi from the Kurogo Station (on the Joso Line)

Kagura (神楽) is sacred dance and music, performed as an offering to the deity or deities  connected with the shrine or festival at which it is performed. With its similar costumes and masks – and accompanists kneeling nearby in the same sort of way, it can seem very much like Noh theater (though the dancers chant no lines – nor are there any narrators) – but kagura is probably much older (which is really saying something, since Noh is the oldest tradition of continually performed theater that is still regularly performed today). 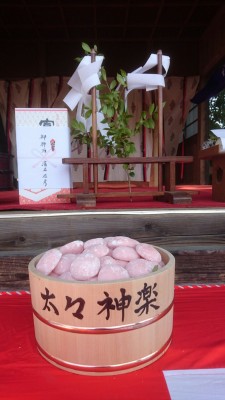 Mochi rice cakes set in front of the stage on the day of the Daidai Kagura event at the Sekimoto Shrine. – though the kanji characters used to write the name of the these dances mean GRAND, the locals residents take the meaning as 代代 (also pronounced DAIDAI) which means from generation to generation – as the tradition of performing them has been carried on for more than 200 years. Note the TAMAGUSHI (sacred sakaki leaves decorated with strips white paper)  in the back.

Kagura (literally Entertainment for the gods) is strongly associated with Shintoism, and the dances performed usually depict stories from Japanese mythology. The same is true of the 8 dances I saw performed at the Sekimoto Shrine, in rusting Sekijo Town (now part of Chikusei City), famous for NASHI (Japanese pears – they have been in the pear business* there since the 1840`s ! Locals are proud of the fact that it was the first town to export Japanese pears abroad back  in 1988!) .

After the Tamagushi (sacred sakaki leaves ) was ritually offered on stage, I watched the stories of Izanagi and Izanami (the divine couple who created the Japanese islands and begat its myriad deities, according to myth), Sarutahiko (the leader of earthly deities – depicted wearing a long-nosed tengu mask), Hachiman (the deified spirit of the Emperor Ojin), Hiruko (though actually Ebisu, one of the Seven Lucky Deities – picking up offerings with his fishing rod!) – and the story of Amaterasu, the sun goddess, being lured out of the cave she was hiding in and thus bringing light back to the world. 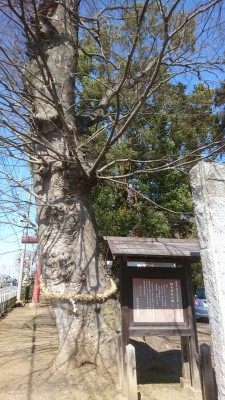 However, as I watched the dances I sensed something more than Shinto going on. Mt. Tsukuba and its surrounding area were for more than a thousand years a center for Mikkyo Esoteric Buddhism (and Shugendo – Shinto Buddhist syncretism) – in which special emphasis was placed on the harmony between the male and female forces (the fact that Mt. Tsukuba has twin-peaks – male and female is probably what attracted Esoteric Buddhists to the area). What happened though was the Meiji Restoration of 1868. After the old order was overthrown, the new government decided to “separate” Buddhism from Shinto (wherever it was mixed) and get rid of certain practices and beliefs deemed superstitious.

Hundreds of Esoteric temples associated with the Shingon and Tendai schools were abolished – their buildings often turned into Shinto Shrines. 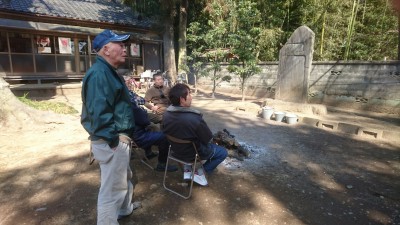 Locals keep warm by a make-shift fire as they watch the Kagura.

So in spring, with the flowers starting to bloom and the beginning of the agricultural cycle just a few weeks away, I detected in each dance performed more than a little bit of Esoteric/Tantric symbolism of Man and Woman coming together to bring life and beauty into the world. It all seemed like a more refined version of the rustic and blatantly sexual Sayaribo or Heisanbo Festivals (among many others) held in the Mt. Tsukuba area (not to mention the Kaigai, the coupling festival that was held on Mt Tsukuba twice a year in ancient times).

I realized that I was right on the mark in imaging Esoteric Buddhist roots for the event (which has been performed in the area for more than 200 years old- and much longer than the Sekimoto Jinja has been a Shinto shrine).

When I asked the priest what the Sekimoto Shrine had been before the Meji Restoration, he said that it had been an Esoteric Temple- dedicated to Kangiten – the deity of marital bliss and harmony between the Male and Female forces! 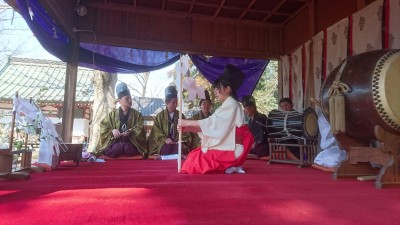 Setting the TAMAGUSHI like a flower to be polinated with strips of paper shaped like lightning representing divine forces that can strike the earth, energize and bring life (like in the movie frankenstein!) 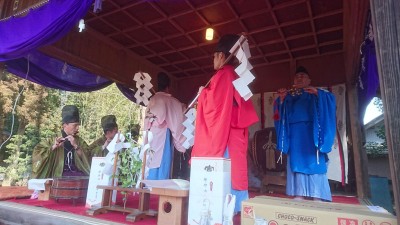 Circling woman, these man touch the woman with their wands as if symbolically fertilizing her. 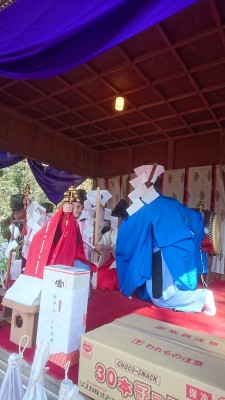 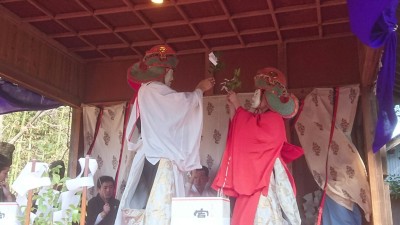 Man and woman coming together 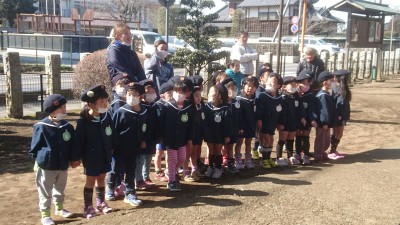 Kids watching for a while 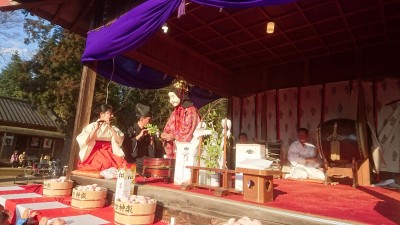 The dancers and musicians are dedicated locals who under the supervision of the shrine`s priest, preserve the town`s Kagura tradition. 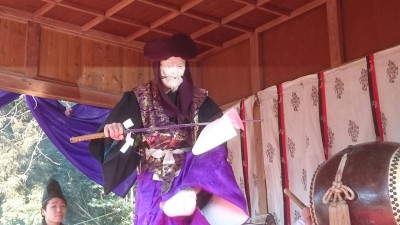 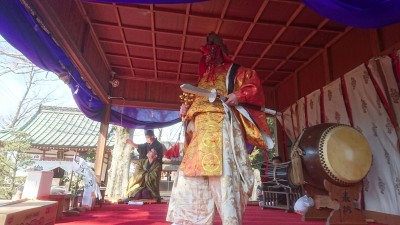 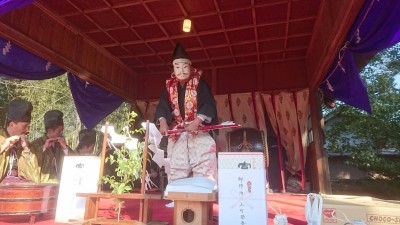 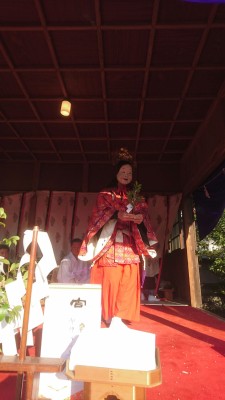 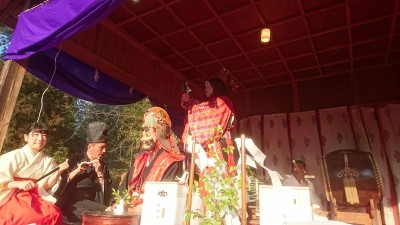 If you plan on going to the event this March 3rd, you might want to bring your own chair with you – the dancing goes on for about 3 hours (from 1:30 – 4:30) as well as a lunch box and drinks (there are a couple of old restaurants nearby where you can order curry and rice and other standards, but there are no vendors at or around the shrine).

If you get to Sekijo early and are a history buff, you might want to roam the ruins of the former Sekijo Castle (Sekijo, in fact means: Seki Castle), just south of the town proper. It was once a stronghold of support for the Southern Court during the Northern and Southern Courts Period (1336-1392). Nothing very much remains of the castle, destroyed back in 1343, except for the graves of the last of the Seki`s who ruled it, Seki Munesuke (関宗祐) and his son. While you stroll around trying to conjure up the past, keep in mind that Kitabatake Chikafusa, one of the important figures of 14th century Japan spend some time at Sekijo after having left Oda Castle (in present day Tsukuba City) where he had written the influential treatise JINNO-SHOTOKI.

Also of special interest is an ancient burial chamber (from 6th or 7th century) called the FUNETAMA KOFUN. Since ancient times that area (beside the Kokkai River) has been a good place to live and there are several clusters of ancient tumuli – but this one is of the greatest interest (for those with an interest in such things) for its large size (the largest tomb of its type in the prefecture) and for the faint remnants of murals that once adorned the stone walls. On top of it is the Funetama Shrine.

* In 1857, two locals, Tateno Teishiro (館野定四郎) and Nishimura Shichiro (西村七郎) began breeding pear saplings. Since that time the area has been a big producer -presently the largest in the Kanto area. Some of the manhole covers in time are even emblazoned with pear motifs!